Brad Pitt’s Weed History: Did It Cause The Divorce?

For years, Brad has spoken about using ganja, but is it fair to put the blame on cannabis for him and Angelina’s divorce? 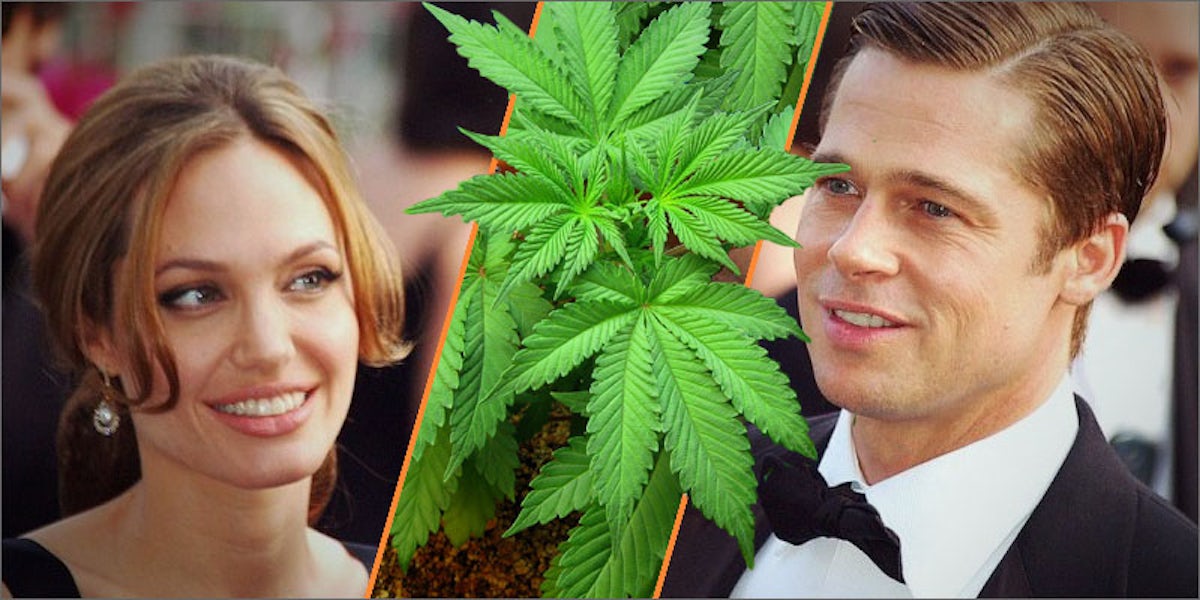 When Angelina Jolie and Brad Pitt recently announced they are breaking up, many people wanted to know why. Although cheating is the first thing that came to mind, rumor has it that cannabis is the culprit. According to TMZ, Jolie disapproves Pitt’s love for the herb. Specifically, she believes Pitt’s marijuana use creates an “inappropriate environment” for their children. In fact, Pitt and his cannabis use made the news plenty of times before. For years, Brad has spoken about using ganja, but is it fair to put the blame on cannabis for him and Angelina’s divorce? Here is a timeline of events that has lead many to believe that marijuana is to blame.

The release of True Romance is what began to create Pitt’s so-called “stoner” image. In the film, we see Pitt lying on the couch, watching tv, and chowing down on Fritos while enjoying a toke. Despite his appearance being brief, it became a big part of his image as a celebrity.

When appearing on Jimmy Kimmel Live, Quentin Tarantino claimed cannabis is what encouraged Pitt to play in Inglorious Bastards. Apparently, the two went over the script at Pitt’s home and consumed some herbal treats while doing so.

We’re poppin’ rosé and he’s got this really cool Pink Floyd kind of rosé. We’re knocking it back, and then a smoking apparatus of some sort found its way on the table. It was like a pop can, red with a little silver stripe.

When Brad woke up the next day, he was like, Ughhhhhhh. He sees the smoking apparatus and he starts counting the empty bottles of wine. It was six.

After Tarantino had discussed he and Pitt’s time together, he made it clear that Pitt doesn’t consume cannabis on set.

In the course of Brad’s time spent on Real Time With Bill Maher, Bill spoke about a party and how Brad did nothing but sit on the floor and roll joints the entire night.

You rolled these perfect joints. The most perfect joint I have ever seen. Like a machine … It was better than a cigarette.

And Pitt took that comment as a compliment, claiming he’s quite the artist. However, Pitt still swore he gave up cannabis once he and Jolie had children.

During an interview with Parade, Pitt says he experienced quite a bit of self-hate during the 90s. Not only does he blame cannabis for his dark times, but he also claims his marriage with Jennifer Aniston is what caused him to turn to the herb. However, he did apologize almost immediately for that comment.

I started to get sick of myself sitting on a couch, holding a joint, hiding out. It started feeling pathetic.

When campaigning for Moneyball during the Oscars, Pitt sat with THR to discuss his stoner days in the 90s.

I was hiding out from the celebrity thing, smoking way too much dope, sitting on the couch and just turning into a doughnut; and I really got irritated with myself.

After a trip to Morocco, Pitt returned with a new sense of respect towards human suffering and seemed to climb out of his depressive state.

I just quit. I stopped grass then – I mean, pretty much – and decided to get off the couch.

Joining John Legend, Russell Simmons, Danny Glover, and director Jarecki, Pitt released a joint statement that supported Obama and his decision not to oppose the opportunity to vote for legalizing recreational cannabis.

And the group even wrote that the decision was a much-needed step away from the decade’s long failed war on drugs.

In an Esquire cover story, Pitt spoke about how he dropped out of college when he was only two credits away from graduating. Of course, he blamed it on his marijuana use.

All I had to do was write a paper. What kind of guy is that? That guy scares me – the guy who always leaves a little on his plate. For a long time, I thought I did too much damage – drug damage.

However, he claims that he made a serious effort to clean up his act around the millennium.

I got burnt out and felt that I was wasting my opportunity. It was an epiphany – a decision not to squander my opportunities. It was a feeling of get up. Because otherwise, what’s the point?

And the craziness continued when the National Enquirer released an issue on “drug-crazed Brad’s twisted double life.” Of course, the story was incredibly dramatic and plain nuts, saying that Pitt has a secret man-cave in his Airstream trailer. Not to mention, a source claims:

Brad will often head there with a buddy, a few joints, some beer and a pack of cigarettes to wind down from the stresses of the day.

Also, the same source says Jolie is highly furious about his love for cannabis:

Here she is doing all she can to stay healthy – while Brad is puffing his life away.

Finally, comes the divorce of Brat Pitt and Angelina Jolie. According to a source from TMZ, Jolie got fed up with Brad and his cannabis use. Likewise, his heavy drinking apparently played a role in their split.

Combined, she says both contribute to his anger problems. Thus, creating an “unsafe” environment for their kids. And according to Jolie’s lawyer, she filed for the “health of the family.”

Do you think Brad should blame cannabis for his marital issues? Is Angelina Jolie overreacting? Share with us on Facebook, Twitter, or in the comments below. We would love to hear from you.

Enjoy the latest and greatest from Herb, enter your email below to get exciting cannabis updates delivered to your inbox.
September 22, 2016 — Last Updated December 05, 2019
Written by Brittney Sanger