Scientists offer a solution for the 10,000 deaths caused by drunk driving each year

It’s worked in other countries around the world. 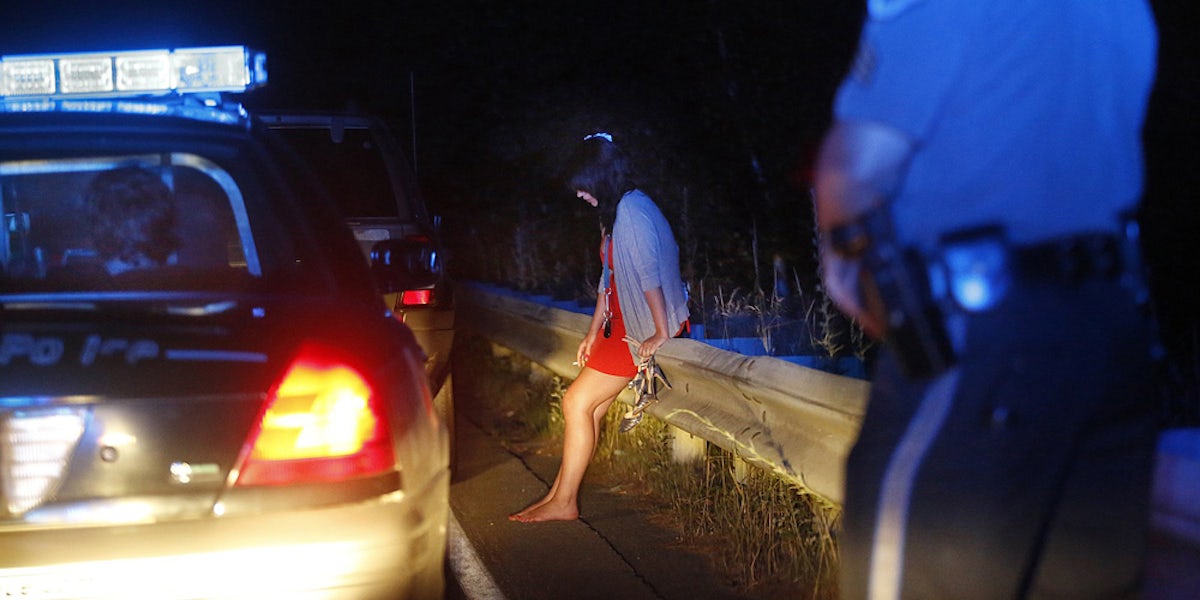 A young woman waits for a taxi while her friend is taken into custody after being pulled over on Cummings Road in Scarborough and arrested for drug possession. ***Note- He was also suspected of being under the influence of alcohol but was not tested in the field.*** Photographed on Friday, July 20, 2012. (Photo by Derek Davis/Portland Press Herald via Getty Images)

A U.S. Government-commissioned panel of scientists is recommending that states drop the drunk driving threshold from a blood alcohol content of .08 to .05. The 489-page report from prestigious researchers at the National Academies of Sciences, Engineering, and Medicine says that lowering the threshold, and other restrictions on alcohol, could help save some of the 10,000 lives lost every year to alcohol-related accidents. The report called these fatalities “entirely preventable.”

Most states have a .08 BAC, but some still use the .1 limit. Utah was recently the first state to drop the limit to .05. There’s already pushback on this recommendation from the alcohol and restaurant industries. But, this same change has made an impact in other countries.

Most countries around the world already moved to a lower threshold.

In Australia, when the BAC limit dropped from .08 to .05, traffic fatalities dropped between 5 and 18 percent, depending on the province. In fact, Australia is already considering dropping the limit to a BAC of .02, like Sweden.

Sweden’s roads are some of the safest in the world. Extremely strict drunk driving rules are a part of that. Since the nineties, Sweden’s been a leader in the fight against drunk driving. In that role, the country has instituted steep fines and guaranteed prison time for people who far exceed the legal limit.

America doesn’t have a federal drunk driving limit for pedestrian drivers, but each state sets its own limit. Starting with Oregon and Utah in 1983, there’s been a broad push to lower the limit from .1 to .08 and most states are on board. During the same period, drunk driving fatalities and traffic fatalities, in general, fell dramatically. In 1983, 1 in 80 drivers were arrested for drunk driving. In 2010, it was about one in every 150 drivers.

So, it’s likely that this move, if state governments adopt it, will lower fatalities on the roads too.

The impact on weed smokers

Currently, one of the hottest topics among legislators in states that have already legalized weed—or are thinking about it—is how to regulate high driving. Unlike with the alcohol breathalyzer, there is no available technology that can accurately detect when someone last smoked weed on the roadside.

The standard protocol among many police departments, including the Los Angeles Police Department which is now in charge of monitoring the largest recreational market in the world, is to take blood samples of drivers suspected of being high. It’s widely accepted among toxicologists, however, that THC can stay in the bloodstream long after a person is still under the influence of cannabis.

Additionally, unlike with alcohol, there isn’t enough science yet to say whether the amount of weed a person consumes directly correlates with how “intoxicated” they are. While signs that say “Drive High, Get A DUI” have been popping up along California’s roadways since the state’s recreational market opened on Jan.1, it appears law enforcement still isn’t too clear on what that means.

Get 20% off premium weed and discover the latest products, news, and deals in cannabis.
January 20, 2018 — Last Updated
Written by Erik McLaren