Now Reading:Uncategorized | Road To Legalization: Is Weed Legal In Colombia? 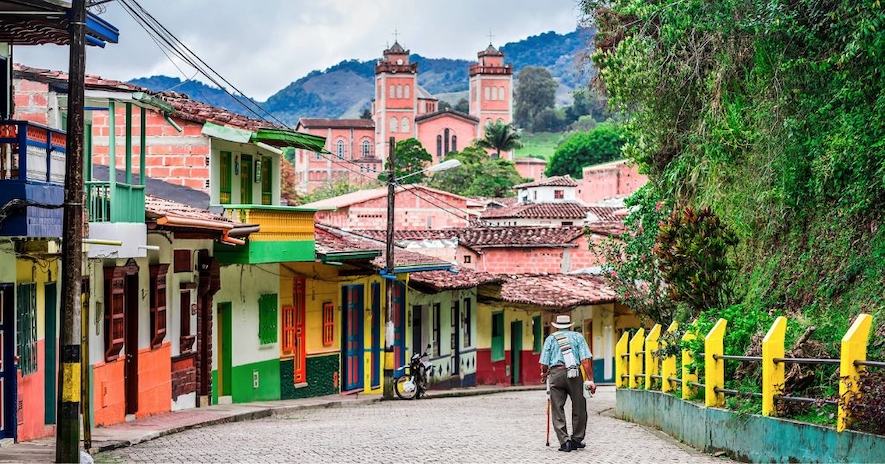 Road To Legalization: Is Weed Legal In Colombia?

A rundown on Colombia’s past, present, and future relationship with cannabis.

Although Colombia has stunning biodiverse landscapes and a thriving cultural and artistic scene, it is still widely known for its cartels and drug crimes of the 80s and 90s.

It’s often associated with The Medellín Cartel led by Pablo Escobar, a direct cause of Colombia’s long and gruesome past. For over thirty years, Colombia has changed its policies and ways of enforcing its war on drugs.

Although substances like cocaine paved the way for stereotypes and ways of looking down on this South American country, the way Colombians view cannabis is quite different.

This megadiverse country has progressive views on cannabis. Let’s take a look at the legality of the plant, how it affects consumption, and whether or not Cannabis is legal in this tropical paradise. With a new president and a new governing party, many changes will come regarding substances.

Colombia’s history and relation with narcotics are well known—or so you think. As a Colombian, I am familiar with the glances, questions, and comments when I announce my heritage.

It is quite frustrating, as the world has been poorly educated on the matter. Either because they watched “El Cartel de los Sapos” or “Narcos” on Netflix, and think they’re onto something. These series glorify the criminals and romanticize how Americans “helped” out in my country.

However, the reality was completely different. We suffered. We bled. Fortunately, those things are in the past, and we are a thriving nation with a profound passion for our country and the world.

Cannabis was the booming substance before cocaine flooded the markets. It is known that Escobar enjoyed smoking joints and favored Maria. However, his crimes and business hurt how people saw cannabis, which was demonized to an extreme.

Although the situation is not as dire as it was in the 1970s, Colombia maintains a thriving illegal drug trade. On the other hand, the legalization of cannabis production for therapeutic purposes has changed the playing field, with licensed farmers now coexisting with illicit farms.

What Is Colombian Gold?

Colombian Gold is, without a doubt, the most well-known cannabis strain from this South American country.

It’s a Sativa landrace strain thought to have originated in the Santa Marta mountain region. It has a peculiar appearance because of its fluffy, crystal-covered buds.

Colombian Gold emits a characteristic aroma: citrusy, sweet, and skunky. Its effects are frequently described as elevating and energizing with enticing properties for almost any scenario.

The Attitude Colombians Have Towards Cannabis

Colombia is a large and diverse country with many regional and local considerations to consider. However, the general attitude towards cannabis is mixed.

Younger generations are very open-minded and have made efforts to become more progressive in all aspects, including cannabis. On the other hand, older generations had really tough times a couple of decades ago. This makes the older crowd very unlikely to have positive or neutral views.

The main concerns are about legalization and how this would affect our country’s already negative international opinion. Many groups continuously lobby and protest for complete legalization, reduced sentences, and more liberal approaches to the existing war on drugs.

What Is The Current Legal Status Of Cannabis In Colombia? 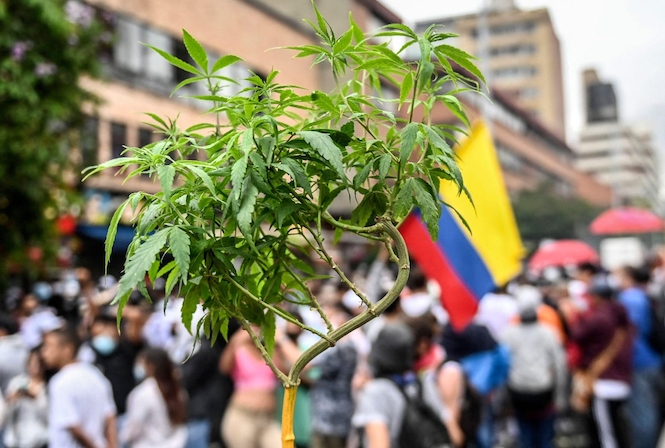 Cannabis possession, use, and commercialization fall under different legal boundaries in Colombia. The government and legislative power continuously use this topic to lobby for votes, and there has been a slow but steady advance toward legalization.

Colombia’s government decriminalized personal cannabis use and possession in 1994. This was in addition to other “harder” narcotics like cocaine. At the time, the decision was received with strong opposition, particularly from the United States.

In 2012, the law was defined further. It stated that anyone caught with 20 grams or less of cannabis would not be prosecuted, but may be directed for treatment, depending on how ‘under the influence’ they were when held. However, this would only apply if the cannabis was discovered in a private residence. Regardless of quantity, public usage remained illegal.

This relatively progressive approach came under scrutiny in 2018. Colombia’s president, Ivan Duque, signed an order stating that police would be authorized to seize even modest amounts of cannabis, even if they were intended for personal use.

Commercial and industrial cultivation of cannabis and hemp is illegal unless done so for medicinal or scientific purposes. The licenses are expensive, and bureaucracy and corruption make it hard for some to get them.

Laws and law-making lobbying make it seem as if there isn’t sufficient knowledge on the matter, as there isn’t enough certainty of the boundaries of the policies. Unlike other countries or states, cannabis-related laws in Colombia are not very precise, so there is a lot open for interpretation. More often than not, police take matters into their own hands due to corruption.

In Colombia, selling or supplying cannabis, seeds, cannabis-derived products, and even plants is illegal. If a person is caught with 20 grams or more, it is considered possession with intent to sell, and they may face a prison sentence.

There have been cases where people have been sentenced to prison for possession with an intent to sell, although they had less than 20 grams. Why? Because they also had paraphernalia like a scale, baggies, or even rolled joints.

The maximum term for drug smuggling is up to 20 years in jail, which is longer than the maximum sentence for many other major crimes. Colombia has a major drug problem, but cocaine is the country’s principal ‘black market’ product, not cannabis.

In Colombia, cannabis seeds (as well as their sale, import, trading, storage, and transport) are legal as long as they are used for medical or scientific purposes.

To legally hold these seeds, the business must first seek a license and register with the Colombian Agriculture and Livestock Institute. They must also have prior certification from the National Institute of Food and Drug Monitoring.

Cannabis seeds are unlawful for all other reasons and may not be used, purchased, or sold. If they are used to cultivate plants for personal use, they are still legal, but they may be fined and the cannabis seized.

That’s how laws are made in Colombia, full of weird loopholes, redundancies, and discrepancies.

Cannabis was formally legalized for therapeutic purposes in 2015 by then-President Juan Manuel Santos. Before this, medicinal cannabis was in legal limbo.

A 1986 law authorized its production, distribution, and sale, but it was not a regulated industry. This significant milestone positioned Colombia at the forefront of the fight against illnesses.

Anyone seeking to cultivate cannabis for therapeutic purposes must now obtain a license from the National Narcotics Council. The first cultivation licenses were issued in 2017, with both Colombian and foreign enterprises eager to begin cultivating cannabis in the country.

Curiously enough, many producers, or potential producers, were thrown into legal dilemmas. They were allowed to cultivate but not sell, sell but not transform, or do other combinations that would allow them to do half the job.