Now Reading:culture | Check Out Aubrey Plaza Getting High With The Weed Nuns 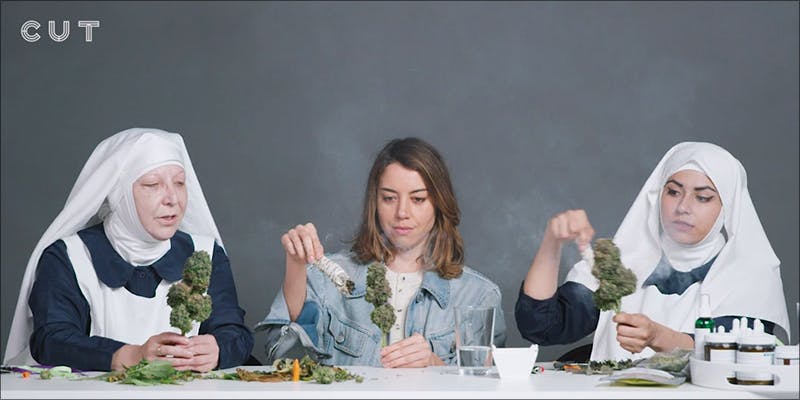 Check Out Aubrey Plaza Getting High With The Weed Nuns

Aubrey Plaza blazed up with Sisters of the Valley – AKA “the Weed Nuns”, and both weed and religion are the big discussion topics.

Aubrey Plaza blazed up with Sisters of the Valley – AKA “the Weed Nuns” – in a fresh edit of Cut’s “Strange Buds” series, where both weed and religion are the big topics.

Aubrey Plaza and the Weed Nuns

In the latest edit of Cut’s Strange Buds series, Aubrey Plaza gets high with the Sisters of the Valley AKA the “Weed Nuns,” which leads to some spiritual talk by way of the stoner.

For those who aren’t familiar with the Sisters of the Valley, it’s a collective of women who support themselves by growing weed and producing cannabis products, all in a spiritual environment.

And who is this Aubrey Plaza from Wilmington, Delaware? She’s a comedic actress that’s most known for her role as “April” on Parks and Recreation, but you probably knew her, too.

So, why is Miss Plaza blazing up with the Sisters of the Valley? It’s park of the promotion for Plaza’s next movie, The Little Hours, which debuted at Sundance and is being released at the end of the month.

The movie is about three medieval nuns – played by Alison Brie, Kate Micucci and Plaza – who lead a simple life within their convent but soon find temptation in the form of Dave Franco. While it’s still yet to be released, the Catholic League has already called it “trash, pure trash,” which could be used on the poster.

Even before the first joint it lit in the video, Aubrey is asking Sister Kate ‘why she and her fellow weed nuns started wearing the habits?’ That’s because Congress was said to have declared that pizza is a vegetable.