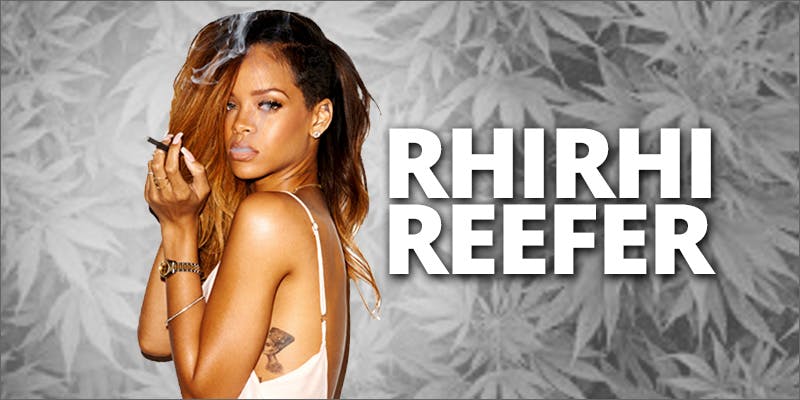 After four years of anticipation, Rihanna finally released her eighth full-length album, Anti. But don’t let her newest album title fool you, she is anything but anti-marijuana.

After four years of anticipation, Rihanna finally released her eighth full-length album, Anti. But don’t let her newest album title fool you, even though Rihanna is an incredibly glamorous, talented musician and pop-culture icon, she is definitely not anti-marijuana.

Her love for herb is openly displayed through the clothes she wears, the parties she throws, and the countless photos of her smoking blunts. Of course, her unapologetic herb smoking has invoked both positive and negative attention—no matter how many times it happens. The cool thing is, she doesn’t care and her blatant use of marijuana continues to dispel stereotypes about stoners. Of all the many RihRih weed moments, these are the top ten.

In April 20, 2011, Rihanna sported several ensembles donned with marijuana leaves on and off stage.

For the cover of her sixth studio album, “Talk That Talk,” Rihanna was photographed inhaling her favorite green substance, letting everyone know she is down to puff.

For Valentine’s Day, Rihanna’s friends knew exactly what the get her. To display their love for who she is and what she smokes, she was given the book “Sex Pot: The Marijuana Lover’s Guide to Gettin’ It On” and an actual marijuana plant in the shape of a bouquet.

Rihanna’s commitment and love for Mary Jane could not have been more literally displayed than when she dressed up as its bride for Halloween. I am absolutely positive she and Mary Jane lived happily ever after.

In September 2012, RihRih really outdid herself for the album cover of her first “Unapologetic” single where she rolled a joint with diamonds. Either she is just that rich or she is trying to tell us something.

While on vacation in Hawaii, Rihanna tweeted, “Kush rolled, glass full…I prefer the better things.” If her proclamation of her love for weed (quoting Drake’s song “Up All Night,”) wasn’t obvious enough, Rihanna enticed the paparazzi as she smoked a blunt in a hot pink mini dress.

4. Getting high with “The Regulator”

Nothing says total badass like smoking a huge blunt backstage with some of the king pins of the marijuana mecca, Snoop Dogg and Warren G. Of course, she received a lot of flack from the media, but honestly if you had were in her place, would you really pass up the opportunity?

3. The eight joint blunt in “We Found Love”

In Rihanna’s 2011 music video, “We Found Love ft. Calvin Harris,” Rihanna smokes joints from the beginning of the video until the very last minute. There is even an incredible slow-motion shot of a joint burning and pupils dilating. But by far the best shot of the video is when Rihanna lights a blunt made up of eight joints and lights it for her main man. She really did “find love.”

According to a newspaper article, Rihanna could get banned from a hotel in Barbados where she and her friends threw a serious stoner rager. Security had to repeatedly knock on the hotel room door because the smoke alarm would not stop going off for what they call a “very familiar cigarette odour.” Looks like she fooled them.

As if the tabloids didn’t already get the picture about Rihanna’s love for marijuana, there was a huge controversy when she posted a montage of Instagram photos of her rolling a blunt at Coachella 2012, while sitting on the shoulders of her bodyguard. In response to all the haters, she tweeted, “I’m crazy, and I don’t pretend to be anything else.” This marijuana moment takes the cake considering the amount of balance, technique, and expertise needed to accomplish this feat. Congratulations, RihRih, you’re way more than just a pretty face.

What do you think of our Top 10 RhiRhi partaking moments? Let us know your thoughts on our social media or in thecomments section below.