The San Bernardino City Council refused to grant High Times a temporary event permit for adult cannabis use. As a result, many vendors booths were empty and the crowds were thin. 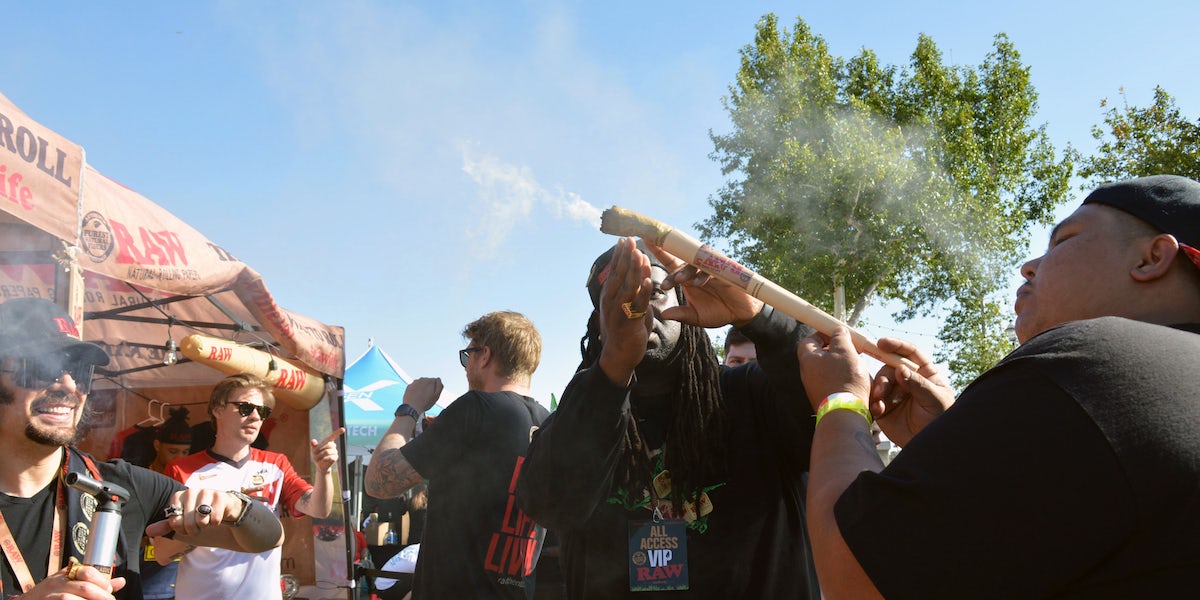 What was slated to be a historical event – the first High Times Cannabis Cup on 4/20 in California post-legalization – ended up pushing stoners into a legal gray area. That’s because, on April 18th, the San Bernardino City Council voted 6 – 0 against awarding High Times with a temporary event permit for adult use of cannabis. The 4/20 event went on, although news of a “cannabis-less cup” scared off a significant portion of vendors and consumers.

The news hurt the spirit of the 2018 Cannabis Cup on 4/20. Going in, I was expecting an epic celebration of all things weed. This was the first 4/20 in California since adult-use cannabis had been put into effect, after all. However, the crowd was much thinner than years past, there were a significant number of empty booths, and the energy was low.

“Some people backed out thinking that High Times wasn’t going to be what it usually is. I mean, there’s fewer businesses and people, but I think for the most part it’s business as usual,” said Kandice Hawes-Lopez at the NORML Orange County booth. “People are still consuming their medicine. I still see people providing for donations, having a good time and celebrating on 4/20, but it’s not as crowded. The people who wanted to come to just get high as hell and get all the free and cheap medicine that they could aren’t here.”

Rather than being an “adult use” event open to anyone over 21 as planned, the Cannabis Cup became a “Prop 215 event.” Meaning, it was open to all those with a medical recommendation in California. However, non-med card holders and non-California residents could still attend the event and the “Prop 215 medicating area” by getting a red wristband, free of charge. By showing your ID to a tent out front, attendees were given wristbands to prove they were medical users.

Once inside the event, it was almost business as usual. Flower, shatter, and a few random edibles were still available, but it was done “gray market” style. Meaning, you could “donate” about $5 per gram, or buy a legal product, like a dab wand for $15 and receive a “free” eighth of cannabis flower. Brands were also still giving out free dabs and lighting up big communal joints at 4:20 PM. It was, however,  more low key than everyone expected for 4/20.

“I was very excited to come here and support the event, give appreciation to High Times, the sponsors, the vendors, as well as the ticket purchasers,” said Keiko Beatie, cannabis consultant and board member of NORML Orange County. “But, what truly affects me right now is seeing the empty booths and knowing the manufacturers and vendors who put a lot of time, effort, and money into being here and counting on the commerce and outreach to the community to establish their business. And seeing this [points to empty booths], I’m disappointed for them… It’s very sad to me.”

Many vendors decided not to show up to the event, and there was a noticeable amount of empty booths. High Times offered vendors full refunds for pulling out. High Times also offered compensation for staying, like a free table at future events. Other vendors told me they had originally planned to have a much bigger tent, but downsized to a quarter of the size to save money.

“It’s terrible [that High Times didn’t get their permit]. We already set up and had everything ready,” said Tray of Golden Gate Extracts. “We had projections of what we were trying to make…. We’re still accepting donations. Only up to one-ounce donations, we can’t do anymore. The projections here were a lot different than with the new rule change. But, ultimately, it’s not their fault. It is the city’s fault.”

“We thought it would be a lot more crowds and a lot more vendors. You know? When there are more vendors there’s obviously going to be more crowds,” added Tray. “So that shut everything down. They came and said ‘fuck it.’”

Why was the rug pulled out from under the cannabis cup at the last minute? There were plenty of rumors circling around the event like the City Council wanted an extra $40,000 for trash pick-up. Other rumors made it sound like previous, non-High Times sponsored cannabis events had set a bad precedent.

“There were two other events [Dabathon and Kushstock] that were bigger, or almost as big as High Times and they were breaking like every single rule…” said Hawes-Lopez. “They had alcohol consumption inside the consuming area. They had naked girls walking around. They were selling pounds for like $500. There were fights that broke out in the parking lot… It was freaking nuts, but they were allowed to go. But, as soon as High Times got on the city’s radar, they made them come in and try to get a permit and then they said, ‘you didn’t come in on time for the permit.’ So they denied it.”

After watching a video of the City Council meeting, two things are clear. First, the permit needed to be submitted 60 days before the event, however, the City of San Bernardino only finished writing their temporary adult use cannabis event licenses on April 7th, making the 60-day minimum impossible. However, it was clear by the language of the City Council members that they were not comfortable with a legendary cannabis event in their backyard.

“We’re talking about crap on the floor from the attendees. This impacts our businesses, and I’m not okay with that,” said Council Member, Virginia Marquez.

High Times was trying to do everything by the book; the problem was the book wasn’t written in time. They’re the first to apply to be fully compliant and host an adult-use event at the San Bernardino “National Orange Show” fairgrounds.

Being at the event, it not only felt like a buzzkill from the low turnout, but it felt like another attempt to censor the cannabis community. By not giving High Times the event permit, San Bernardino kept cannabis underground, even though the state has fully legalized cannabis-use for adults. On a day as significant as 4/20, this felt like a slap in the face to cannabis-consumers.

Get 20% off premium weed and discover the latest products, news, and deals in cannabis.
April 22, 2018 — Last Updated
Written by Michelle Janikian