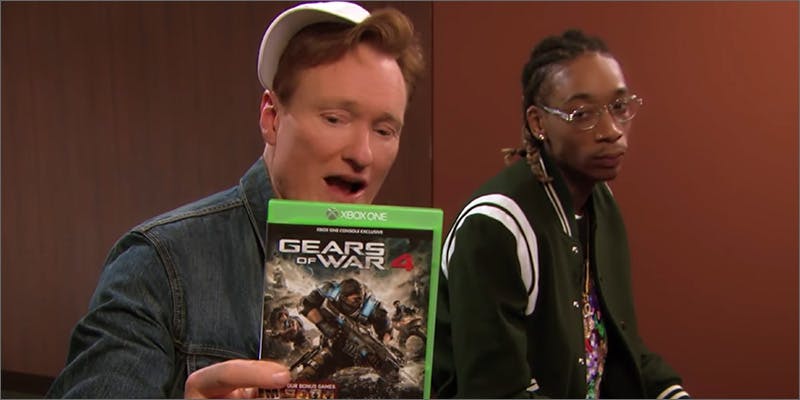 In another segment of Clueless Gamer, Conan O’Brien invites Wiz Khalifa to get high and play Gears of War 4, then eats an entire bowl of potato salad.

In another segment of Clueless Gamer, Conan O’Brien invites Wiz Khalifa to play Gears of War 4. Being that Gears of War is a more violent game, Conan needs someone to help mellow out the experience. Of course, Wiz is the perfect guy for the job. Not to mention, he never shows up empty-handed when it comes to the good weed. Be sure to check out the video below for an intense game of Gear of War 4, followed by Conan enjoying an entire bowl of potato salad.

If you think of Wiz as one of the most chill guys around, think again. Upon arriving to play Gears of War 4, Wiz appears nice and calm, brings the good weed along and even gives Conan his own joint.

After lighting up, the two begin playing the game. And from there, we learn very quickly that Wiz is not-so-mellow when it comes to video games.

As the game ends, Wiz lights up yet again, and Conan comments that the fire department has been there at least six times. All in all, these two together make one hilarious duo. Don’t forget to check out the video below of the two conquering large robots while getting baked.