Potential Penalties After Denver’s Civic Center Was Trashed On 420

Denver Mayor Michael Hancock has ordered a review into the “rampant fence-hopping, public pot-smoking, and slow trash cleanup” at the Civic Center. 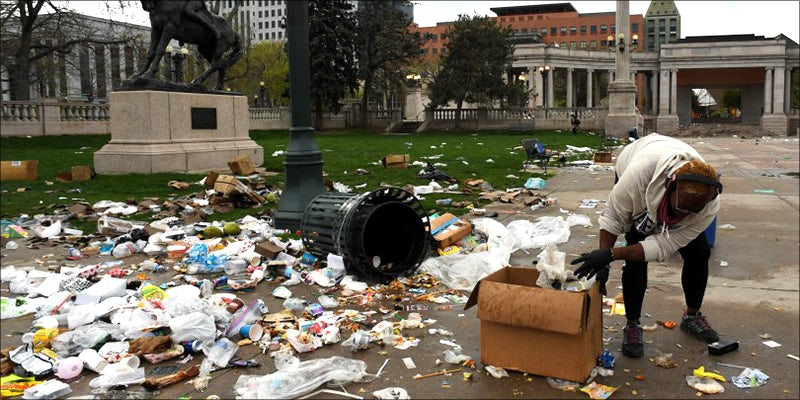 While 420 is the unofficial “holiday” for anyone that loves weed, it has seen 4/21 turn into a solid day of work for some, especially at the epicenter of celebrations at Civic Center Park in Denver that saw a whole lot of trash having to be picked up.

That all happened despite cleaning crews having gone in after the celebrations on Thursday, cleaning up Civic Center to how it looked before the organized 420 events started. But, by Friday morning, the bags of collected trash were ripped open and emptied out into piles around the park.

But, on early Friday morning, the event organizers returned to the park and helped see to getting the mess cleaned up before 11 am.

The mess that was found on Friday morning saw Denver Mayor Michael Hancock ordering a review into the “rampant fence-hopping, public pot-smoking and slow trash cleanup” that left Civic Center in a “disrespectful state” during and after 420.

Delivering his most forceful critique of the annual event, Hancock said the city’s inquiry could yield penalties for organizers and affect how the event unfolds in future years.

Our parks and public spaces are held in the public trust. When you leave one of our parks trashed, you violate that trust. – Mayor Hancock

The organizers of the celebration responded on the same say, with a statement that said they “believed they complied with all permit conditions”, insisting that they “returned Civic Center Park under cleaner conditions than it began,” well within the timeframe given by the city.

In another separate statement, Santino Walter (an event producer of the private Civic Center Park Productions LLC) apologized and took “complete responsibility” for the trash that was piled around the park on the Friday morning, stating that it was “essentially a scheduling mistake in trash clean up”, which was complicated by other factors the night of the event.

Get 20% off premium weed and discover the latest products, news, and deals in cannabis.
April 28, 2017 — Last Updated January 09, 2020
Written by Todd Farmington