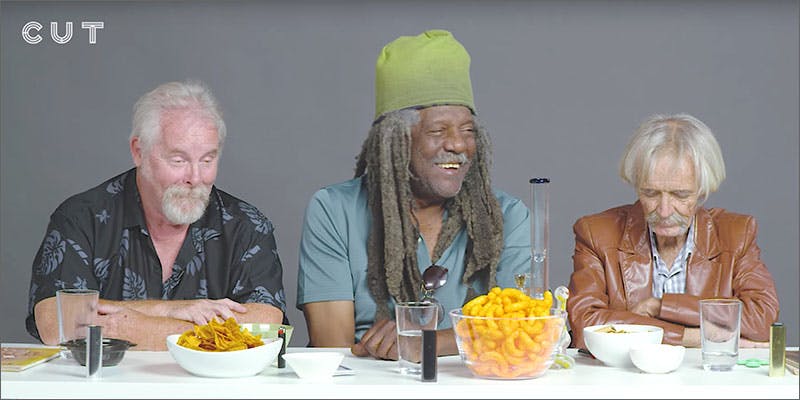 These Green Grandpas Just Smoked Weed For The First Time

In the latest video of Cut’s “Strange Buds” series, three grandpas get elevated for the first time, which you have to see.

The team from Cut is back with another edit that brings people together in the best possible way, by having them smoke weed. In the past, Cut has assembled groups which have included the likes of Aubrey Plaza and the “Weed Nuns” to a rabbi, a priest, and an atheist. The latest video is similar to the latter, which has three people smoke weed for the first time, this time being grandpas.

Yes, these three senior citizens – well, close to, anyway – all claim to have never smoked weed before. Those three grandpas are, from left, Robert, Marvin, and Graham. While none of the men have allegedly smoked, they’re “dying to try it.”

For Marvin, he grew up in a religious environment, where it was taboo. Graham said he never had the urge to, “even though his friends were smoking.” But his friends were also sniffing glue and paint, which is probably not the best environment or people to experiment with. He didn’t drink, either, as he called himself a “happy-go-lucky guy.” For Robert, weed had always been a negative thing in his mind, continuing that he had “never wanted to jump off that particular bridge.”

After the quick introductions, three are given a line-up of “paraphernalia” – to quote Marvin – to smoke with, which includes a bong, a joint and a pipe. Given that all three are said to be first-time smokers, the first few tokes and hits sees them coughing, but that can happen to the most experienced of smokers.

From there, all three grandpas wax lyrical about day-to-day life, which includes one of them pretty much almost falling asleep.