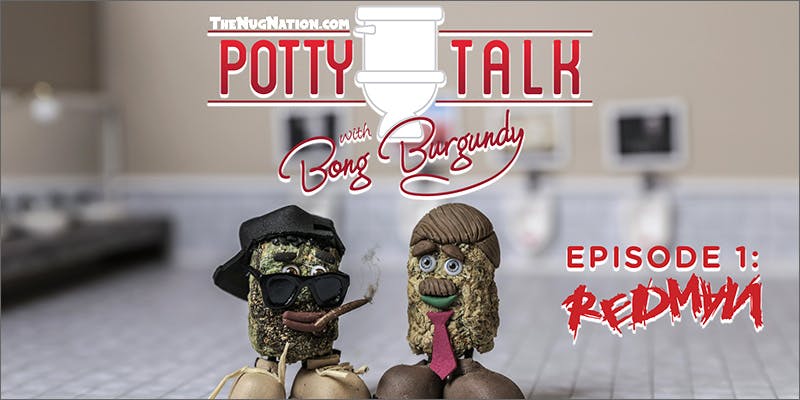 You need to see this hilarious video from the genius Nug Nation guys to see Redman as an animated herb, and interviewed by the unstoppable Bong Burgandy.

Nug Nation is back and at it again! The stop-motion shenanigans of these smokable citizens are about to get down and dirty in the first installment of Potty Talk with Bong Burgandy. Check the hilarious video out below.

Nug Nation will have a special guest in their first celebrity interview. Bong Burgandy, the newscaster Nug with the power tie and power mustache is going to interview cannabis lover and musician Redman.

As an icon in cannabis culture, Redman was the obvious choice as the segment’s first celebrity interview.

Redman gets the Nug Nation makeover as an animated herb and has an intimate chat with Bong Burgandy in the place everyone loves to have a conversation, a public restroom. Redman was hyped to be turned into a nug by the show creators:

It was dope workin with The Nug Nation team, it was a breeze to knock out.

I’m glad The Nug Nation has been created. It just shows how large the marijuana industry is and the future of the movement. – Redman

Rather than rest on his laurels, Redman has a host of projects in the cannabis industry. His new app, Blaze Now, will help cannabis lovers find dispensaries across the country. His upcoming collaboration with DJ Jayceeoh, “1000 Volts,” comes out later this year. Furthermore, Redman is also partnering up for the first FDA-approved all-natural warning label with Cannamarkusa.

Set in the quaint fictional town of Nugville, Colorado, The Nug Nation is a stop-motion animation comedy that has that wry sense of humor you would expect from either Adult Swim or South Park. In addition, the creators designed and constructed the Nug characters around different strains of our favorite herb! From Affy the Afghan to Diesel, Ms. White the widow to the OG, they are all there, and more friends are coming.

Another reason to love these crazy creations is that the Nugs give a platform for cannabis product placement, tailored branding, and advertising that is reaching bigger audiences every day.

Which character strain are you probably going to smoke while watching? Let us know on social media or in the comments below.