Guy Puts Tesla On Autopilot, Leans Back, Closes His Eyes And Lights A Fat Blunt

While driving at highway speed, American Comedian Lil Duval decided to destress in the most epic way possible. He threw his Tesla on autopilot and lit up. 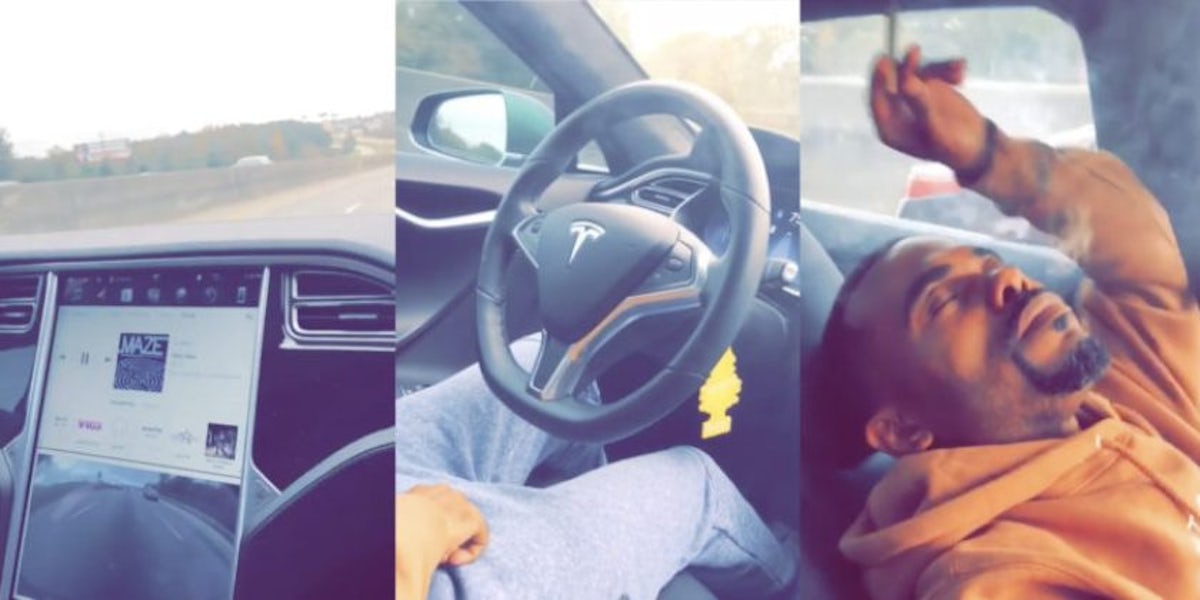 For better or for worse, driving high is common among marijuana enthusiasts. There’s just something about driving around with the windows down, music up, and joints blazing (Asher Roth even wrote a song about it). New studies have also found that marijuana use doesn’t necessarily make drivers more dangerous, but instead, creates the “little old lady” effect, where one is inclined to take things more slowly. Some judges, unsure that driving high equates to driving impaired, have even let off drivers in some cases after they’ve admitted to smoking before getting behind the wheel.

And yet, when it comes to the road, the stakes are—like many marijuana users behind the wheel—impossibly high. But what if you could have the best of both worlds: fun and safety? In a recent Instagram video, American comedian Lil Duval seems to have achieved just that.

The video starts with a shot of Duval’s car driving down the open highway. But as the camera pans left, you soon notice that nobody has their hands on the wheel of the car. The camera plans further left still, revealing a shot of Duval leaned all the way back in his chair, head back, eyes barely opened, and blunt raised. As Duval blows thick clouds of marijuana smoke into the air, the car, miraculously, remains on course.

This is because Duval is driving a Tesla, a brand of automobile designed by Elon Musk to include a revolutionary autopilot feature, which takes advantage of “full self-driving hardware” to “provide a safety level substantially greater than that of a human driver.” While smoking a blunt in the driver’s seat is almost certainly not what Musk had in mind when he designed the vehicle, the feature does bring up a number of prudent questions. If the car’s self-driving feature really does offer safety above and beyond the capabilities of a human driver, how might that play into laws pertaining to driving under the influence of marijuana? How about alcohol—should someone with a self-driving car be permitted to allow their vehicle to escort them home from the bar?

In Australia, the National Transport Commission recently recommended that those being escorted by driverless cars be exempt from drinking and drug-driving laws, so long as there is no possibility for the human to override the self-driving feature. But what about for cars that simply have a fully-automated feature—how might the consumption of drugs and alcohol in these vehicles be regulated?

Given studies that show that marijuana impairs drivers to a similar extent as one or two drinks, it seems plausible that marijuana and alcohol would be regulated differently. But until further research and development, smoking a blunt behind the wheel of a Tesla, even on autopilot mode, likely isn’t the best idea. Consider the driver of a Tesla Model S that got into a fatal car accident in 2016, partially because he was relying too heavily on the automated driving feature.

Lil Duval’s latest blunt cruise will unquestionably be the envy of marijuana enthusiasts everywhere. But unfortunately, for the safety of yourself and other drivers on the road, the stunt is better left un-imitated.

Enjoy the latest and greatest from Herb, enter your email below to get exciting cannabis updates delivered to your inbox.
November 15, 2017 — Last Updated
Written by Rob Hoffman