Now Reading:culture | Was Sarah Silverman High At The Emmys? 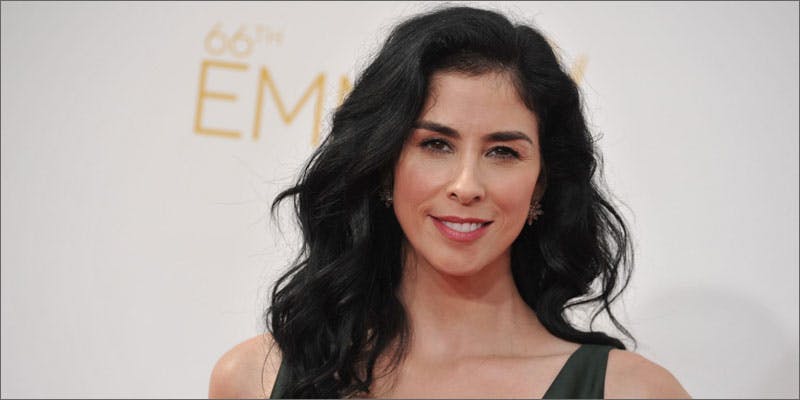 Was Sarah Silverman High At The Emmys?

Was Sarah Silverman high at the Emmy Awards? After E!’s Red Carpet “Clutch cam” it would seem, yes!

Did Sarah Silverman just pull out her weed stash on a red carpet on national television? Well not weed per se, as she would call it “liquid pot”. Everything this woman does just makes her even cooler than the day before.

Giuliana Rancic was snooping through Sarah Silverman’s clutch as part of E!’s Red Carpet “Clutch cam” segment at the 2014 Emmy Awards and got more than she asked for!

As Giuliana goes through the 43-year-old comedienne and actress purse, she first pulls out Sarah’s iPhone – very typical, everyone has a cell phone. But what she pulled out next was much more interesting. Sarah Silverman whips out her vape pen from the bottoms of her clutch. Not so typical now!

She is not one to shy away from controversial situations, so it’s unclear if she forgot it was in there, or kind of just rolled with the punches when she knew she was busted when the inquisitive host opened up her clutch. Both Silverman and the host looked a little shocked when it is first pulled out, but Sarah then goes on to say, “This is my, uhh, my pot, it’s liquid, um, pot”. Good save?

Guiliana is then so uncomfortable about what just happened and clearly worried she may lose her job for revealing a vape pen on prime time national television, that she just responds with, “OK, moving on….”

Anyways, of course, this revelation led people to believe she may have been high during the Emmys. The video below is a behind the scenes video that TMZ filmed when they caught up with Sarah after the Emmy’s. So, they had to ask her, was she high during the show?

She responded with, what we think, is a very clever and witty answer:

“It’s not true. I had a pot vapor pen thing for later. I don’t drink and I would like to have a little puffarooney at the end of the night when all is said and done, because I’m a grown woman”.

There are other stories that she was asked about the vape pen by reporters backstage.

“I had pot for later in my purse,” she said. “It’s legal and I don’t drink. I like to have a puff as a treat at appropriate times.”

Damn right Sarah, we don’t blame you. Nothing like a celebratory ‘puffarooney’ after you win an EMMY! Sarah went on that night to win Writing For A Variety Special for her show We Are Miracles.

We also love her response to TMZ’s questions, “Did you enjoy the Emmy’s”. In which she answered with an exasperated, “YES! Of course I did!” And finishes with a jokingly “now move the fuck along”.

So, high or not, this is just another reason to love Sarah Silverman. She totally showed her “human” side, which proves celebrities are just like everyone else. It is great to have famous faces advocating for marijuana and marijuana legalization.