Watch: President Obama’s Final Speech “The Last Time I Was This High…” 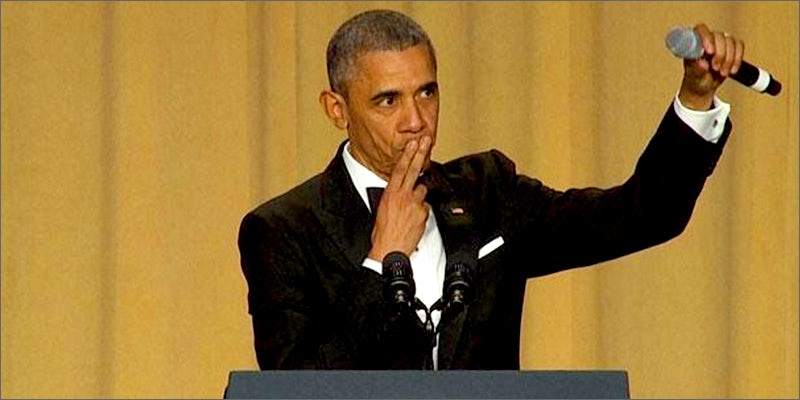 President Obama’s final speech at the White House Correspondents’ dinner was a dynamic and hilarious and ends by declaring “Obama out” and literally dropping the mike. Check out our edited version below of Obama talking about his current ratings in the polls. Is he the coolest President ever? Please legalise in your final days!

His speech was peppered with killer burns toward the current Presidential candidate hopfuls:

“Next year at this time, someone else will be standing here in this very spot. And it’s anyone’s guess who SHE will be.”

On Trump (there’s a lot more gold besides this!)

“They say Donald lacks the foreign policy experience to be president. But, in fairness, he has spent years meeting with leaders from around the world — Miss Sweden, Miss Argentina, Miss Azerbaijan. And there’s one area where Donald’s experience could be invaluable and that in closing Guantanamo, because Trump knows a thing or two about running waterfront properties into the ground.”

“Bernie, you look like a million bucks. Or, to put in terms you will understand, you look like 37,000 donations of $27 each. I am hurt, though, Bernie, that you have distanced yourself from me. That’s not something that you do to your comrade.”

The Last Time I Was This High

Check out President Obama’s final speech in full below, I promise it’s worth it. Obama, we sure are going to miss you. Whoever stands up there next year has a tough act to follow.

What do you think of Obama’s final speech? Let us know on social media or in the comments below.

Get 20% off premium weed and discover the latest products, news, and deals in cannabis.
May 03, 2016 — Last Updated
Written by HERB