Is This Weed Version Of Adele’s ‘Hello’ The New Legalization Anthem?

Who ever thought that Adele’s “Hello” would be getting a clever and educational weed parody to it? We certainly didn’t. 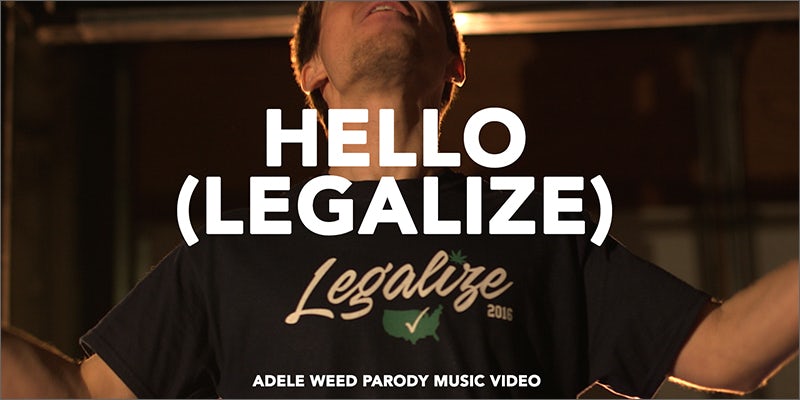 It seems like it’s been an “Adele weed week” after Wiz Khalifa freestyled “Hella O’s” earlier in the week, which has been making huge waves over the Internet as a stoner anthem for Adele’s breakout single.

However, “Hello (Legalize)” is a different style than Wiz Khalifa’s stoner anthem. Instead of only talking about getting high (which there’s nothing wrong with obviously), “Hello (Legalize)” aims to be an educational and inspirational song that brings some reasonable viewpoints as to why we should legalize weed. It may not be the most talented of songs, but it has the right message.

Maybe the world can actually listen and learn.

SCROLL DOWN TO SEE THE VIDEO.

Obviously, Ryan is no Adele-level vocalist! He puts an acoustic spin on the record and changes up her style a tad bit – his voice may not be that amazing, but we can still kind of dig it.

However, we think the biggest takeaway of this song is not the performance, but the message of it all. As we mentioned before, the legalization points are spot on – and realistic.

These are legalization points that the average individual does not necessarily think about and could be at least respected by even the most anti-legalization individual.

In the first chorus, the first legalization point is the following:

This couldn’t be any more true. If we have learned anything from the United States’ last prohibition (alcohol) – it was a complete failure. Prohibition has never worked. The prohibition of cannabis is no different besides the fact that it has lasted much longer – so it’s time to end that.

In the second-half of the chorus, the next legalization point is made:

“So I think it’s time we legalize,
Or at least reclassify.
As a Schedule I drug,
It makes zero sense.
Stating heroin’s as dangerous,
As a non-lethal plant.”

He then reinstates what we all think about that:

“That’s bullshit,
You know it isn’t.

(Cannabis is much safer)”

Not a lot of people recognize or even know what a Schedule I drug is.

Schedule I drugs are in the strictest classification and are said to have “no currently accepted medical use” (even though over half of the states in the U.S. say otherwise) and they have a “high potential for abuse.”

We certainly hope you can agree that heroin is not as dangerous as cannabis. Ryan is right – that’s bullshit. Even the new DEA leader admitted so as well. So, maybe he can listen further into this song and at least look into reclassifying the cannabis plant finally. It’s been long overdue.

3. Reclassify To Research It.

For the second piece of the chorus, Ryan begs for reclassification again, but this time for an additional reason:

“I think it’s time we legalize,
Or like I said reclassify.
To research this plant,
And finally understand.
We’ll let the science,
Determine the rest.”

Schedule I drugs have caused an extensive amount of problems for being able to research cannabis extensively, which is why there are not a lot of huge clinical trials for cannabis to date. Going through the DEA has been a nightmare for researchers.

So DEA, listen up, reclassify, and open up the ability to research in order to find out what the potential of this plant can be – and even the possible negative effects.

Ryan continues, but this time for another reasonable direction we have all been fighting for:

“So I think it’s time we legalize,
Or first we decriminalize.
You put these people,
At risk of many things.
Their opportunities,
Can be taken away.”
Once again he states:

Decriminalization is a big first step that a lot of advocates have fought for. Why? Because cannabis possession or use of the plant should not be a crime. It should be treated like alcohol or tobacco and should not put people at risk for their future employment, housing, family, etc. Once again, he’s right; that’s bullshit.

5. Regulate and Help The Economy.

For the final chorus, Ryan brings up a point that will surely raise the eyebrows of those who only think about the money:

“I think it’s time we legalize,
I can’t leave out this reason why.
Cause our country only cares,
About the money.
Well how does this sound?
A billion dollar industry.”

We don’t need to even explain this chorus. It speaks for itself as the cannabis industry is prospering and would prosper even more with full regulation and taxation across the country.

6. This Movement Can’t Be Stopped.

Finally, he brings us his last valid point:

“So I think it’s time we legalize,
Here’s my last good reason why.
You can’t stop this movement,
It’s never gonna end.
We’ll just keep on spreading,
Our education.”

And he says the truth yet again:

The cannabis movement has grown for decades and decades, and has only become stronger thanks to the spreading of education through cannabis documentaries, advocates, news stories, and legislators, which has resulted in the increase of public acceptance of cannabis. And it won’t stop.

Ryan ends his phone call with the DEA with two words that brings the entire song together with why we will win in the end:

2016 is set to be a huge year for cannabis and we hope that many people can learn from the legalization points in this song and start to rethink cannabis policies. Just like he points out, it will inevitably happen.

If you want to show the world that you believe it’s time we legalize as well, you can get your own “Legalize 2016” shirt or hoodie right here! 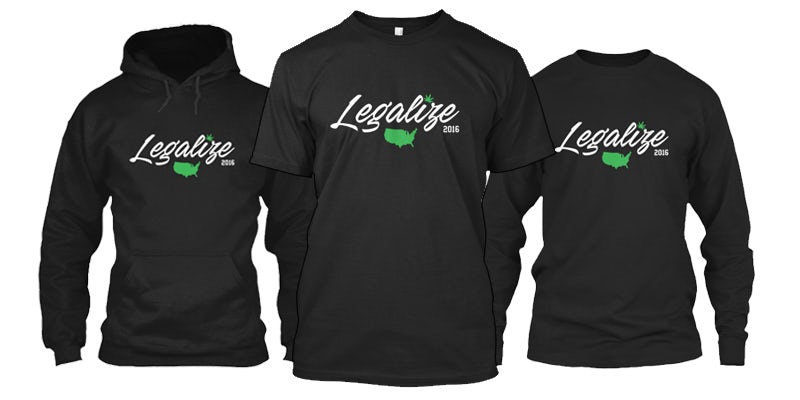