Now Reading:events | Blue Ribbons For Best Buds On Show At This State Fair 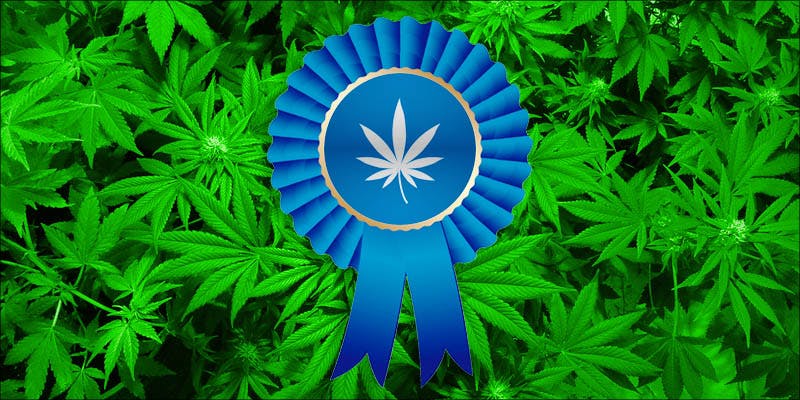 Blue Ribbons For Best Buds On Show At This State Fair

For the first time in the history of the Oregon state fair, cannabis is on display for judges to decide which will go home with a blue ribbon.

State fairs, who doesn’t love them? From the aroma of delicious fried food to sound of laughter and excitement, it’s impossible not to have fun. Until now, though, no fair before has included the best thing on this earth: cannabis. However, one exhibit at this summer’s Oregon State Fair is making that dream a reality. For the first time in the history of state fairs, cannabis is on display for judges to decide which will go home with a blue ribbon.

Finally, two of life’s greatest joys are in one place. That’s right; Oregon State Fair is introducing a new crop: cannabis. In fact, these are the first-ever live cannabis plants to be shown at a fair period. In a tent that pleasantly smells of pine and skunk stands nine prize-winning plants.

With that said, deep fried Oreos may no longer be everyone’s favorite thing at the fair this year.

It was this year that the state Legislature designated cannabis as a farm crop. And the general public should know what it’s all about.

Dan Morse, the head of the Oregon Cannabis Business Council, says judges use a number of criteria, including spatial noding, leaf structure, and aroma. However, the judges apparently don’t sample the product itself. In fact, the health and appearance of the plant don’t interpret the potency or how much psychoactive compounds are within.

We’ve never shown anything at a state fair – it would be like my husband’s dream to be able to show some of our cattle or his pigs or stuff. So it’s a pretty big deal for us.

This year, Seybert’s livestock made it back to the farm, but it’s her cannabis plant that won second place for the Indica type.

Not only do people want to take an up close and personal look at the plants, but they also want to know all about them. With that said, there are lots of questions and comments from the public.

Basically, ‘What strains are these?’ or ‘I’ve never seen a plant up close!’ or ‘Oh, my plants look way better than this!’ – that type of stuff.

Since 2014, when recreational pot became legal in Oregon, business has been booming. From setting up farms to opening dispensaries, the herb is pretty much everywhere. Therefore, it’s no surprise that it’s found its way to their state fair.

Aside from bringing in lots of tax revenue for the state, the plant also creates other opportunities, including photo ops, for people like Garvin Reiter.

It was definitely No. 1 on our list. I mean, it’s a lot better than corn dogs.

Like other Oregon residents, Reiter isn’t shocked by the plants being at the fair. If anything, he’s amused by them.

It’s not really much of a surprise, honestly, to see it at the state fair, because it’s everywhere. Plus you can just go down to the store and buy it if you want some.

Gaining trust while having fun

Identical to stores, the tent checks your ID to ensure that you are at least 21. However, there’s a lot more fun to be had here for people like Reiter than at your typical corner store.

You know, it’s up there with the prize-winning turnips. So that part you really gotta love.

Though the plants are indeed at the fair, they aren’t actually next to the turnips. Along with other commercial vendors, the cannabis tent is in a pavilion. And in that same pavilion are exotic animals and people trying to sell you their “latest and greatest” products.

However, Don Morse, a member of the Oregon Cannabis Business Council, would love to see the herb in the same tent as other crops. Specifically, in an agricultural tent.

Being that this year’s fair had a ton of traffic, cannabis growers in Oregon are going to reach their goals in no time.

Did you attend the Oregon State Fair? Do you hope that cannabis will be displayed at more state fairs as legalization progresses? Share with us on Facebook, Twitter, or in the comments below. We would love to hear from you.