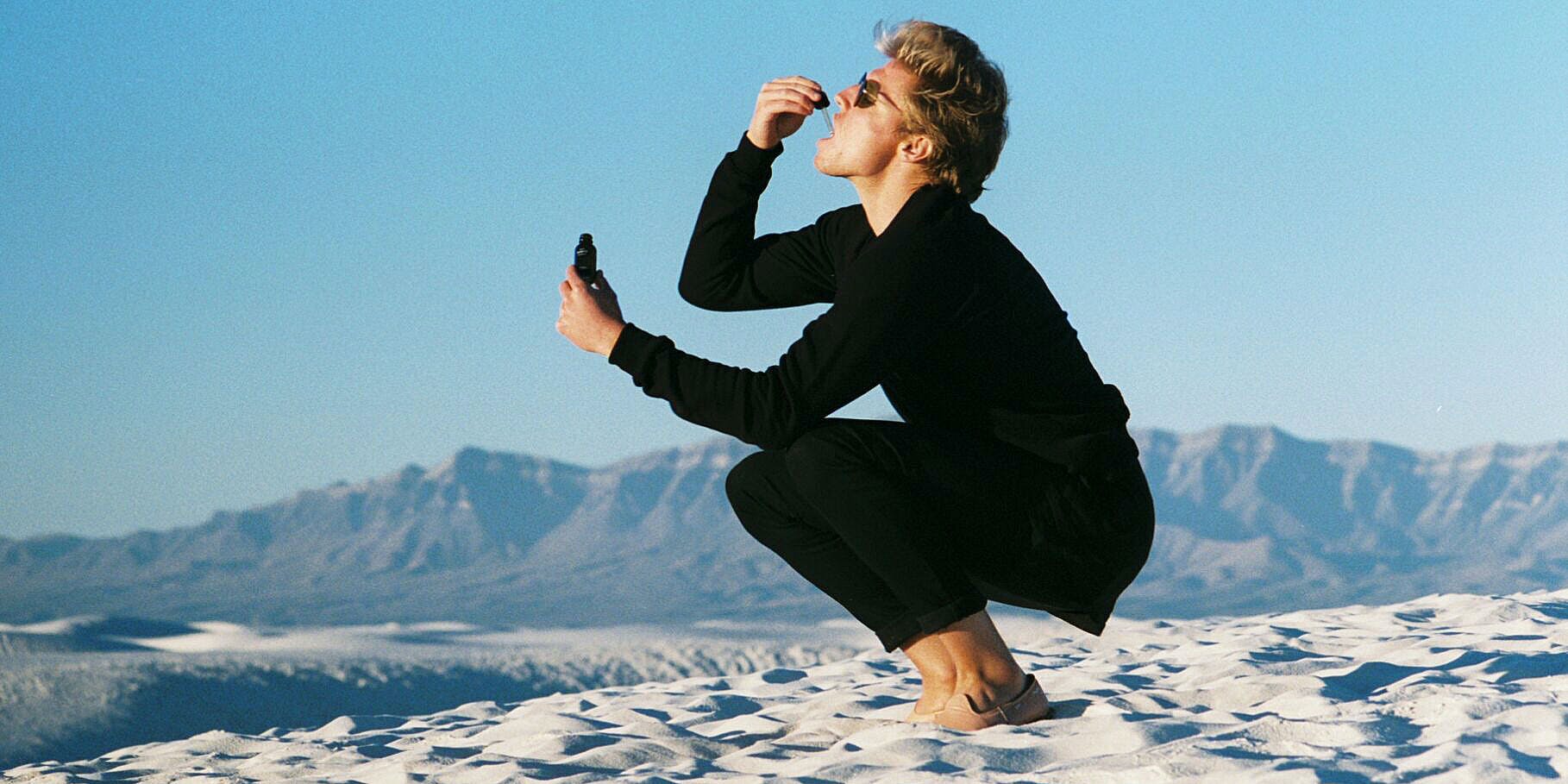 A mountain climbing trip changed this young man’s life — just not in the way he was expecting.

“I’m dying in Peru.” This is all Mills Miller says in a 4-second video clip he recorded on his phone after climbing Mt Pisco in the Andes Mountains (19k ft). An amoeba parasite from sherpa stew had angered his large intestine, causing it to inflame and squeeze his colon. Peruvian Doctors gave Miller his options; remove his colon in Peru, back home in the US, or lay in a hospital bed and wait for his colon to pop. Miller chose a fourth option — to bet his life on plant medicine and CBD oil. It’s a gamble that would lead him on another life-changing journey, founding his two-year-old company, MINERAL.

A Chance Encounter With CBD Oil

In April of 2016, Miller and his partner Haris Fazlani, owners of underscore studio, began developing a wellness-oriented project. “We were between gigs and designing brands in developing verticals. A majority of our time was spent researching the legal cannabis space.” Miller and Fazlani were deep in the discovery phase when an opportunity to explore South America peaked Miller’s interest. “My friend and frequent creative collaborator, Devin O’Dea, invited me to go mountain climbing in Peru — 19,000 ft up. Haris and I agreed to revisit the project in the fall and I left for South America in June.”

Miller, unaware before the climb, used the expedition to climb out of his own malaise. “I wasn’t happy and it took scaling this mountain for me to realize it.” Miller began looking for a transformation, of sorts, one that would shake his mental funk. “I got to summit sometime in early July. It was special but there was no glorified moment of sudden and sharp awareness. No perspective shift.”

A Stranger In A Strange Land

After the climb, Miller was invited to join his mountain guides for lunch. “Everyone else is asleep. I’m lit up, mind racing, still insatiably searching for whatever I didn’t find at the top. The sherpas see my stupor and kindly invite me to lunch.” On the menu was sherpa stew with alpaca and guinea pig, stored in the mountain snow, which would melt during the day. Three days after the stew, Miller began to feel ill. “I began vomiting profusely. Then diarrhea. Then came the blood.”

Shedding weight and unable to eat, Miller was determined to continue his trip. “Stupidly,” he recalls. From Huaraz to Lima to Cusco for Machu Picchu, however, his condition worsens to the point that he can no longer stand up straight. In Cusco, Miller is escorted to a clinic by the owner of his Airbnb. After providing blood and stool samples, Miller returns to a team of tense doctors, preparing to explain his dire situation.

“They sat me down and told me in polite, broken English that an amoeba parasite had attacked my lower intestine.” Miller’s intestine is now inflamed and wrapping around his colon, “squeezing it like a water balloon.” It’s only a matter of time before the pressure becomes too much, his colon pops, and fecal matter leaks into his bloodstream. At this point, he’ll become septic. The doctor’s suggested a colectomy. “I declined.” He decided to take his chances.

“I went back to the Airbnb and just tried to survive. I remember being in such pain that I would grovel on the floor, slipping between death and delirium…” Eventually, the woman who owned the Airbnb returned to find Miller passed out in his own filth. She took him back to the clinic, where doctors were ready to perform emergency surgery. “It took all my strength to refuse surgery.” The doctors reluctantly agreed and left Miller in a dingy clinic bed.

O’Dea, Miller’s climbing partner hadn’t heard much from him since he headed out to Machu Picchu. He came back to Cusco just in time. Gathering information from Miller’s host, Devin raced to the Cusco clinic. He arrived just in time to scoop up his friend, hop on the first flight to Lima and wait 12 hours for a return flight to the states.

Betting His Life On CBD Oil

By the time Miller touched down in Dallas, his hometown, he had lost around 30 pounds. In desperate need of medical attention, Miller turned to Dr. Cathie Yaussy, a family friend and experienced gastroenterologist at Baylor Hospital. Dr. Yaussy confirms the diagnosis Miller received back in Peru. “For the first time, she actually shows me this obstruction in my colon, and it’s about the size of a Lego Block.” Dr. Yaussy expressed serious concern. “She wasn’t positive that removing my colon was our best option. But she did push for me to enter critical care.”

Miller held his ground. He felt strongly that there was a natural remedy. Dr. Yaussy prescribed liquid antibiotics, anti-inflammatories, and anti-parasitics. “I didn’t take any of it”. What he did take was CBD oil and a host of plant-based anti-inflammatories. His research as part of underscore studio had taught him that CBD was a natural anti-inflammatory. “I bought a 1500mg tincture from a company in Colorado, now a competitor, and started dosing with ginger, turmeric and tons of water.” Miller’s radical plan also had him eating mud, activated charcoal, pumpkin, and cloves to combat the parasite. He went back to the doctor.

“After 4-5 days the inflammation had subsided and the obstruction shrunk to the size of a pencil eraser.” Miller had plant medicated his way back to health. Stunned, his doctor gave him the all clear to go back home to Austin. Upon his return, he knew what his next step would be. “I told Haris ‘we’re going to start a CBD company’. Even if we didn’t really know what that meant. We didn’t even know how much we didn’t know.”

A CBD Oil Company Is Born

Today, that company is MINERAL. Their signature product ROBYN is a 100% pure full spectrum CBD oil. “It has 26 different terpenes and 12 different cannabinoids that our bodies are primed to consume and activate, all of which are preserved during the extractions process.” Unlike many CBD oils, which will use carrier oils, additives, and flavorings, MINERAL’s ROBYN uses MCT oil, a scent-free, flavorless fat soluble carrier to deliver a whole food. The journey from MINERAL’s beginning to ROBYN is almost as remarkable as Miller’s brush with death in South America.

Taking what they had learned through intensive research, Miller and his partner began putting together simple social and email campaigns to educate people on the basics of CBD. After months of consistent work, we became recognized as a beacon for the cannabis curious.” Their followers began treating them as a vault of information and were desperate to get their hands on quality CBD oil.

“We were constantly asked, ‘where do we get high-quality CBD oil?’ I couldn’t tell them. It didn’t exist.”

Miller was determined to develop a CBD product of his own. He spent a year visiting farmers, scientists, and formulators to learn all he could about CBD. “I started formulating products in my kitchen from extracted oil samples. However, I couldn’t create a product with the effects backed by research. There was no healing.” Hardly discouraged, Miller persisted.

In the summer of 2017, he ran into a woman wearing a shirt from a trusted CBD brand in downtown Austin. “I asked if she was a fan of the brand. She told me she worked for them. ‘That’s unfortunate’, I responded immediately. She looked curious as she asked ‘why?’ I told her, ‘because they make inferior products.’

“Inferior to who?” she asked. Miller didn’t know, but this chance encounter kickstarted what would eventually become ROBYN.

She introduced Miller to the man who is now their Chief Farmer, Pauli Roterdam. Pauli is a former chef turned hemp farmer and cannabinoid formulator who lives in Colorado Springs. A Las Vegas native, Pauli’s passion and approach to the hemp plant is something special. “Everything I gathered about CBD or hemp quickly became obsolete after 5 minutes of musing with Pauli.”

Pauli’s time as a chef had created a unique approach to the plant. “He didn’t speak so much about CBD, but rather he educated me on the importance of full-spectrum oil and terpene to cannabinoid ratio. We shared a vision of delivering hemp products to the people. So I pitched him on MINERAL and together we created ROBYN.”

“It starts with the plant. The whole plant.” In order to maintain the integrity and purity of the oil, Pauli and Miller developed a process that preserves terpenes, cannabinoids and naturally occurring fats and enzymes that increase the body’s ability to absorb the nutrients. After working doggedly to perfect ROBYN’s formula, Miller is bullish when he discusses the fruits of his team’s labor, “ROBYN is one of the only full spectrum CBD oils that is responsibly extracted. It’s the only oil that does as CBD is advertised: bring balance back to the body and mind. ROBYN is a real plant-based medicine.”

Since launching ROBYN on December 11th of 2017, with Fazlani as head of creative and now O’Dea as CMO, the response has been difficult to describe; “It’s truly out of this world. We’ve grown 100% month over month with a 41% reorder rate. The people love ROBYN.

To learn more about MINERAL, and why Miller is so confident that ROBYN is the best CBD oil available today, check out their website.