The Facts Are In, And Fentanyl-laced Weed Is Complete Bullshit

Cases of fentanyl-laced weed have been wildly misreported. 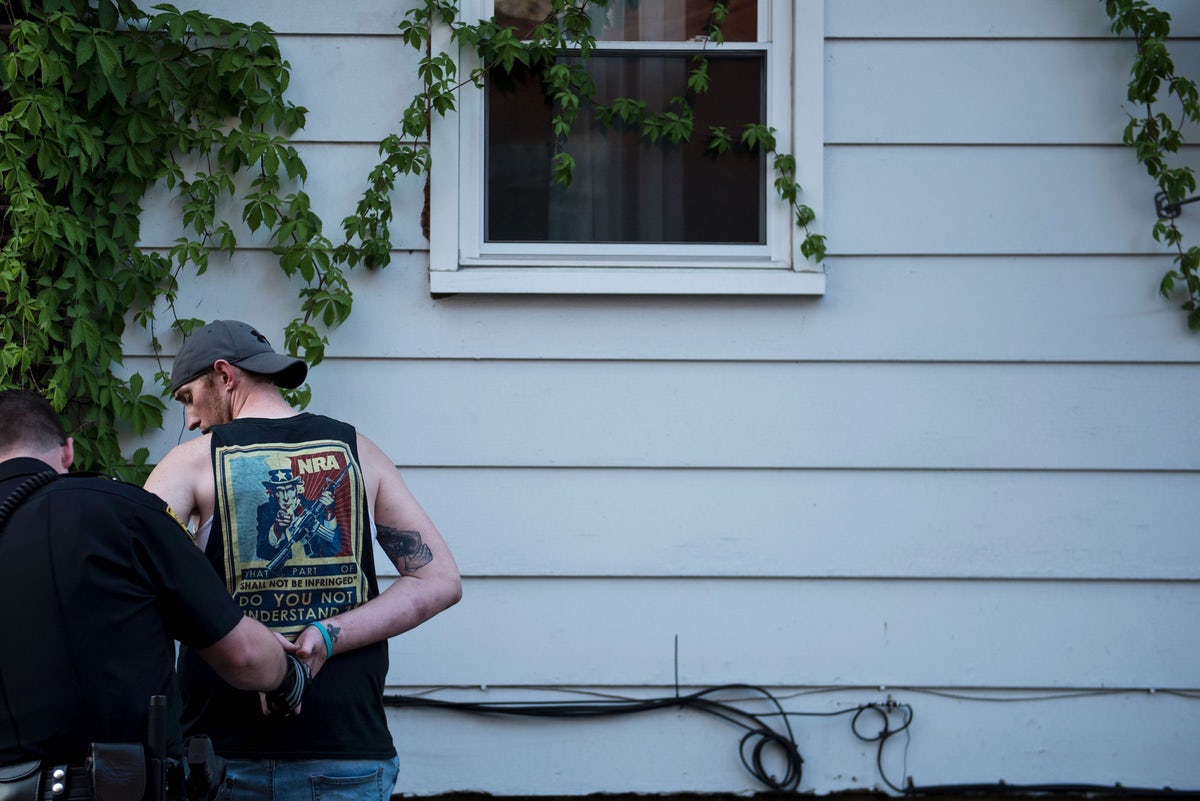 A suspect is searched on April 19, 2017 in Huntington, West Virginia. A needle was found on him.
Huntington, the city in the northwest corner of West Virginia, bordering Kentucky, has been portrayed as the epicenter of the opioid crisis. On August 15, 2016, from 3:00 pm to 9:00 pm, 28 people in the city overdosed on heroin laced with fentanyl, a synthetic opioid far more powerful and dangerous than heroin. The economic incentives are powerful: one kilogram of fentanyl costs $5,000, which can make a million tablets sold at $20 each for a gain of $20 million. “This epidemic doesn’t discriminate,” Huntington Mayor Steve Williams said. “Our youngest overdose was 12 years old. The oldest was 77.” Photo by BRENDAN SMIALOWSKI/AFP/Getty Images

It’s the country’s latest epidemic! All over America police are discovering opioid laced buds and warning their neighborhoods to keep an eye out. But this latest terrifying trend seems to be the result of a giant game of telephone.

The rumors appear to have begun in February when the Painesville Township Fire Department in Ohio posted a message to their Facebook page. The department wrote that they had responded to a call in which three people overdosed on, “marijuana laced with an unknown opiate,” in an attempt to warn the community.

As it turned out, the people who made the emergency call weren’t exactly being honest about their drug of choice – crack – and the fire department later posted a clarification:

“The people involved in these incidents,” Painesville FD wrote, “later admitted to the use of other drugs, in addition to smoking marijuana. Lab results found no evidence of laced marijuana.”

Despite the clarification, reports have begun to spread all over the country and have caught the attention of drug warriors like Senator Rob Portman of Ohio. Delivering a speech to the Senate in March he spoke of the troubling trend of fentanyl use, but also took it one step further.

“Drug traffickers are lacing other drugs with it.” Portman claimed, “I was told by the DART Task Force in Toledo that they’re actually sprinkling fentanyl in marijuana now.”

Through Portman and others, the rumors continued to spread. In Washington state, the Makah Tribal Police Department claimed they had found fentanyl-laced weed that had been purchased from someone who did not have a license to distribute. Police Chief, Jasper Bruner, said that his office’s field tested the cannabis and confirmed that it contained fentanyl. Though it’s unclear what a field test would be, short of identifying some really sticky weed.

On October 1st, the chief discovered that those field tests might have been flawed when the State Patrol Crime Lab found no trace of fentanyl in the product.

The rumors have even made their way across the border. In London, Ontario Canada, a Huff Post story originally stated that marijuana had been laced with fentanyl and resulted in a trip to the emergency room. A later correction to the story cleared up that record noting that, “in fact, the opioid was found in urine samples of people who said they used pot and heroin.”

After testing the cannabis in question, Health Canada confirmed that it hadn’t been laced with any opiates.

Among them, the attending physician in London, Dr. Chris Mackie, told the CBC that it’s better to be safe than sorry. “If there’s a one percent chance that there’s fentanyl in someone’s marijuana, that’s a really serious risk for me.”

And he’s not the only medical professionals to have fallen into the rumor mill. Ohio’s Hamilton County Coroner, Dr. Lakshmi Sammarco, recently joined Senator Portman at a public event and warned of fentanyl-laced weed with seemingly no evidence.

When asked by VICE, Sammarco claimed that her statements were misunderstood and that she had never personally seen opioid laced marijuana, but that Portman had told her it was a frightening new trend.

“The bottom line is, anyone, anywhere could mix fentanyl and marijuana and there’s no way of knowing it until it’s too late,” DA Matthew Stowe warned local news in Tennessee after a report surfaced in his community. While Stow is technically right and the increased use of fentanyl across the country is a very real and scary trend, it’s astounding how certain so many people are in the face of facts.

August 19, 2019 — Last Updated October 02, 2019
Written by Miroslav Tomoski
Save for later
Start saving articles by clicking the heart icon and you'll find them again in your profile page.

Enjoy the latest and greatest from Herb, enter your email below to get exciting cannabis updates delivered to your inbox.
August 19, 2019 — Last Updated October 02, 2019
Written by Miroslav Tomoski

Finding a movie worth watching when high can be challenging, so we're here to help you out with a list of the best movies to watch…

For some of us, life is all about eating. So we smoke weed because it's the only way to make food taste even better.