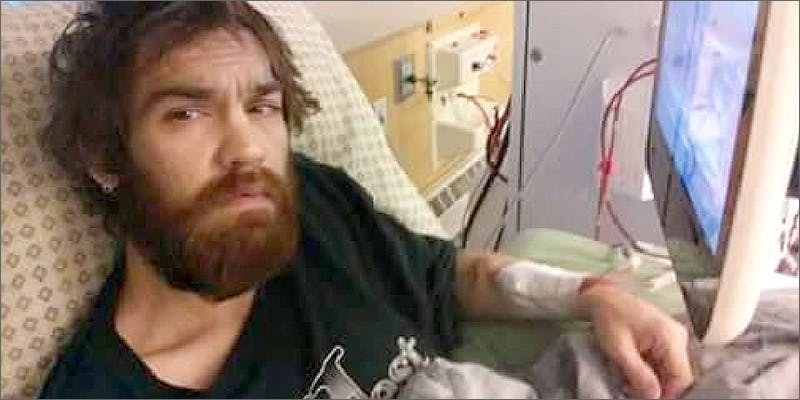 Garry Godfrey has Alport Syndrome, a hereditary disease that causes renal failure at a young age, along with debilitating pain, nausea, and anxiety.

Yeah, you read that correctly: a kidney patient has been taken off the transplant list for using medical cannabis. And, while the hospital has given a reason as to why it made this decision, it has led to a new bill being proposed.

Due to having used medical cannabis, a kidney patient in Maine has been taken off a transplant waiting list.

But that has seen state lawmakers considering a bill that would prohibit Maine hospitals from doing so, even though one local hospital says there are reasons to disqualify patients who use medical marijuana.

The patient that was removed from the waiting list, Garry Godfrey, has Alport Syndrome, which is a hereditary disease that causes renal failure at a young age, along with debilitating pain, nausea, and anxiety.

As he needs a new kidney, Godfrey was put on Maine Medical Center’s transplant list in 2003, but Maine Med adopted a new policy 2010.

I was informed that they changed their policy and that you can no longer use marijuana, I was removed off the list.

A Maine Medical Center spokesman could not comment on the specific case but issued a statement,

Our Drug Use policy currently prohibits transplant candidates from using marijuana, due to the risk of an invasive fungal infection known as Aspergillosis.

But state lawmakers are looking to make laws to prohibit hospitals from doing that, even though one hospital has said there are medical reasons, including the above, to disqualify patients who use pot.

I’ve tried so many pharmaceuticals and none of them worked, but the medical cannabis does. It helps me function. It helps me take care of my kids.

Maine Med says that once the patients are off marijuana, it is possible to re-qualify, which would see them put back on the hospital’s waiting list.