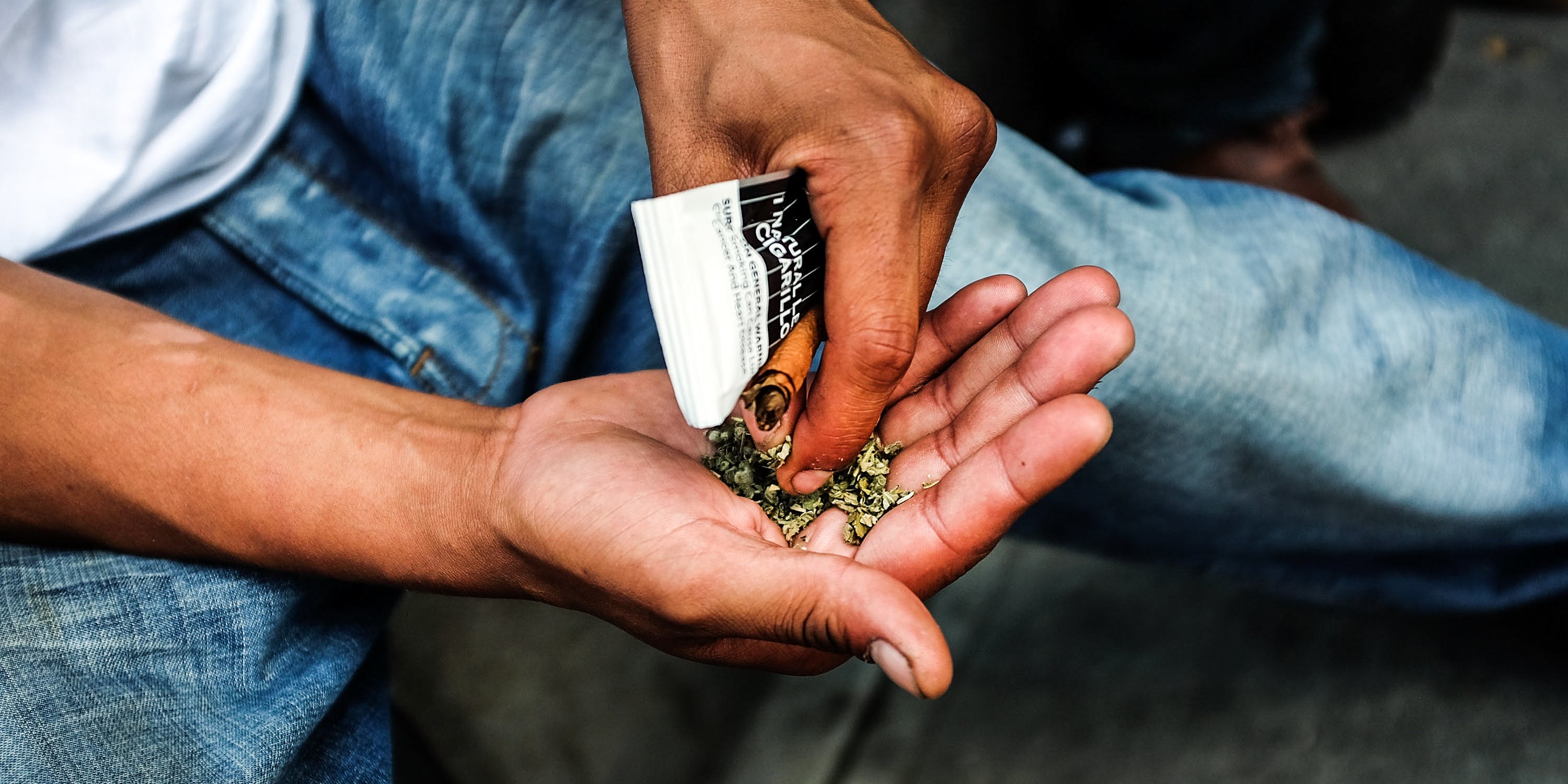 NEW YORK, NY – AUGUST 05: A man prepares to smoke K2 or “Spice”, a synthetic marijuana drug, along a street in East Harlem on August 5, 2015 in New York City. New York, along with other cities, is experiencing a deadly epidemic of synthetic marijuana usage including varieties known as K2 or “Spice” which can cause extreme reactions in some users. According to New York’s health department, more than 120 people visited an emergency room in the city in just one week in April. While the state banned the ingredients used to make K2 in 2012, distributors have switched to other ingredients and names in an attempt to circumvent the law. (Photo by Spencer Platt/Getty Images)

The DEA just approved Insys to distribute synthetic forms of cannabis. They did this despite the company’s history of abuse.

The Drug Enforcement Administration is expected to undergo the final approval process of a synthetic form of cannabis which completed the final stages of Food and Drug Administration trials in the Summer of 2017. Insys is now awaiting the right to bulk produce and distribute its approved medication once the DEA is properly able to track its distribution.

According to a DEA notice filed with the Federal Register on March 30, 2018, a period for written comments has come to a close for its plan to issue Insys the rights to produce distribute its own synthesized versions of cannabis.

The DEA has indicated that it will offer Insys the exclusive right to manufacture and distribute its synthetic forms of Marijuana and Tetrohydrocannibidiols as Schedule II rather than Schedule I substances allowing them to be prescribed for certain medical conditions.

Insys completed its Phase 3 trials of the FDA’s approval process late last year and was finally granted the DEA’s blessing in November for a THC-based oral spray known as Syndros which is meant to treat nausea, vomiting and weight loss in AIDS and cancer patients.

Insys recently faced legal action related to its opioid-related products, which were falsely marketed. While the fentanyl spray was only meant for cancer patients, the CEO, former executives, and former managers allegedly bribed practitioners to prescribe “Subsys” to patients who were not diagnosed with cancer to increase profit margins.

The FBI arrested its former CEO, John N. Kapoor, and five other executives in October on charges of racketeering related to the case. The company is also developing a product to treat opioid overdoses and is currently in Phase 2 of FDA trials for the development of a synthetic form of CBD.

Additionally, Insys has come under criticism from the cannabis community and is considered responsible for the failure of Arizona’s 2016 ballot question which offered to legalize recreational marijuana in the state. That year, Insys gave $500,000, the largest anti-cannabis contribution in US history, to Arizonans for Responsible Drug Policy, the group which campaigned against and successfully defeated the effort to legalize.

This approval is not the first time the federal government has accepted the use of synthetic forms of medical cannabis. In 1985, dronabinol, the main component of Syndros was also approved in pill capsule form under the name Marinol.