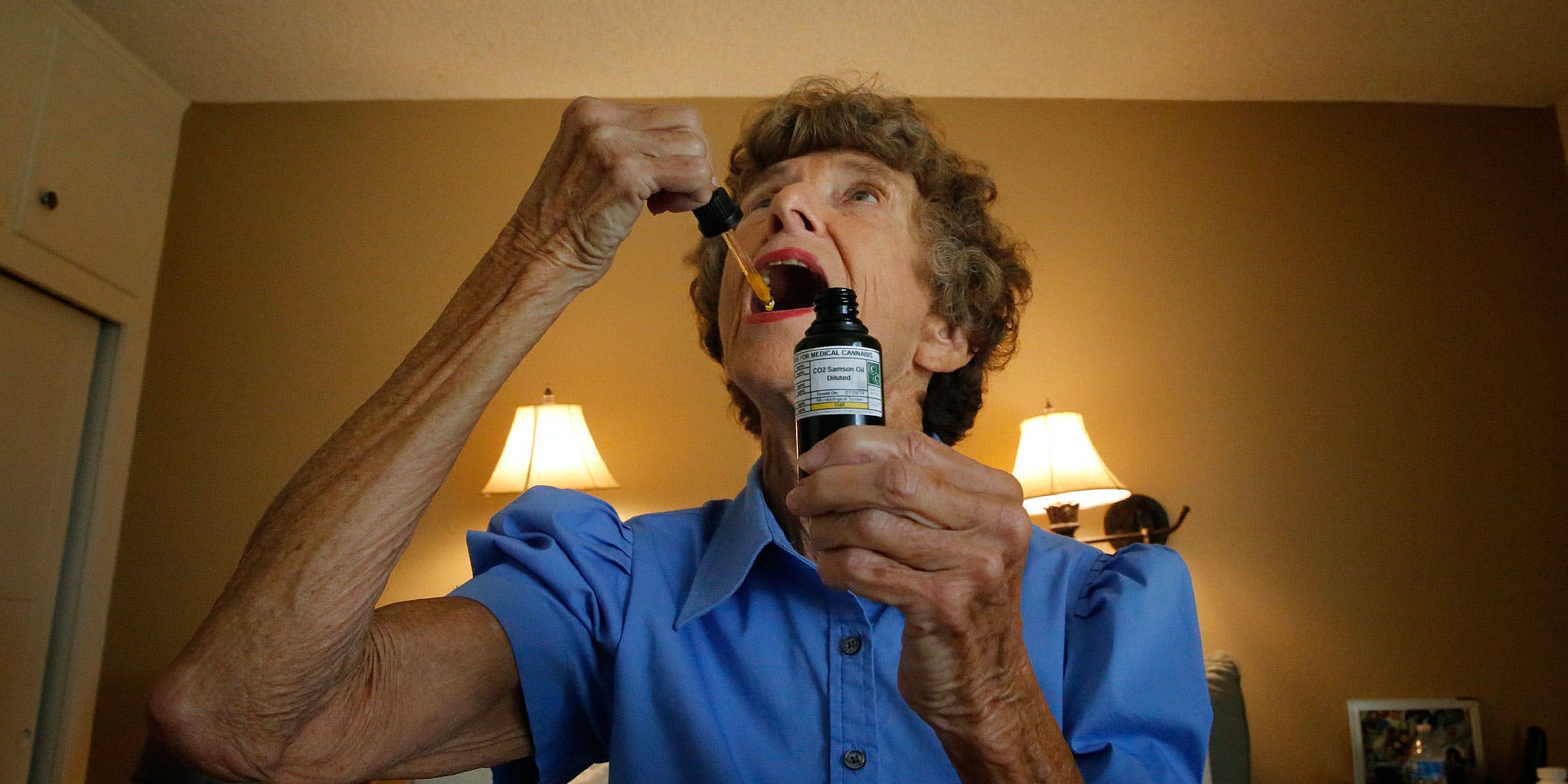 Pat McClintock, age 85, takes drops of marijuana oil in her Laguna Woods, CA, home to help relieve chronic back pain. She said acupuncture, cortisone shots and chiropractic adjustments weren’t enough. Now she can walk farther than she could before trying it. She gets the drops from the medical marijuana collective in the retirement community. While growing up in Texas and raising a family in Wyoming, McClintock said she nerer had the temptation to smoke pot early in life. (Photo by Don Bartletti/Los Angeles Times via Getty Images)

Of the 138 senior patients sent the survey, 27 percent claimed that they were able to “completely” discontinue their use of painkiller medications with the help of medical marijuana.

A surprising number of seniors are using medical cannabis to wean themselves off less desirable drugs.
This, according to a survey conducted by Northwell Healtha non-profit organization that oversees the most extensive healthcare system in New York. Researchers sent the survey to 138 anonymous medical cannabis patients afflicted by chronic pain, ages 61-70. The 20 questions ranged from their cannabis dosages, consumption methods, and consumption frequency to their possible experiences with side effects.
Of the respondents in the Northwell survey, 27 percent claimed they were able to “completely” discontinue their use of painkiller medications with the help of medical cannabis. Another 20 percent claimed to have “extremely decreased” their use of other painkillers since the integration of medical cannabis.
The seniors were also asked open-ended questions by Northwell so they could elaborate on their experience with medical cannabis, a section they used to express overwhelmingly positive reviews.
“I was on Percocet and replaced it with medical marijuana. Thank you, thank you, thank you,” said one respondent. Another claimed that “I was on opiates for 15 years, and six months on marijuana, and off both completely.”

Nine out of ten respondents said that they would recommend medical cannabis to others.

Other studies have similarly found an increase in cannabis use among those from older age brackets. Another survey of 47,000 people found that people 65 years or older are now using cannabis 250 percent more than they used to.

Northwell Health’s findings add to a growing body of research suggesting that medical cannabis could be used as a tool to fight the country’s current epidemic of opioid-related deaths. New York’s Health Commissioner, Howard Zucker, recently announced that the state would be adding opioid use to the list of qualifying conditions for medical cannabis access.

In 2013, seniors accounted for 55 percent of all opioid prescriptions.

However, access to medical cannabis can be prohibitively expensive for many. According to Dr. Diana Martins-Welch, a Northwell Health physician and co-author of the study, a one-month supply of medical marijuana can cost patients an average of $300.

Martins-Welch says that a patients’ ability to afford this cost is made more difficult by cannabis’ Schedule I classification under the Controlled Substances Act, which means insurance doesn’t cover cannabis medications.

The researchers presented Northwell Health’s findings in May at an annual meeting of the American Geriatrics Society in Florida.