Why prisons should give inmates marijuana

A Scottish doctor fights to make it a reality. 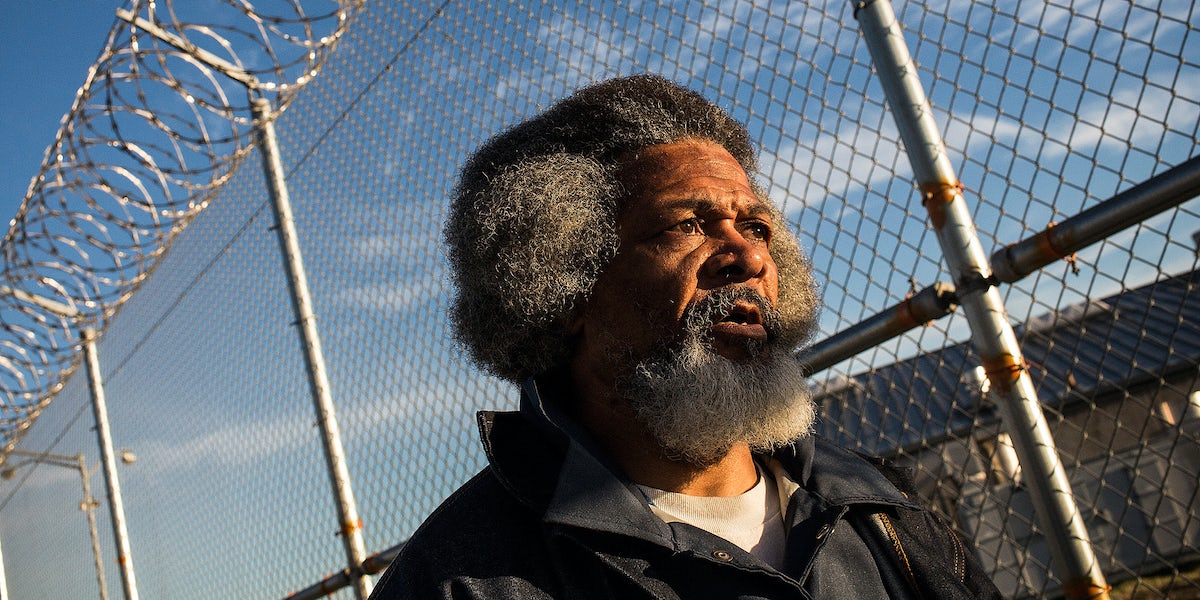 VACAVILLE, CA – DECEMBER 16: (Editorial Use Only) George Whitfield, age 56, heads to the physical therapist’s office at California State Prison, Solano, on December 16, 2013 in Vacaville, California. This is Whitfield’s fourth time in prison – his current sentence is six years. He was sentenced for possession of narcotics with intent to sell and an illegal firearm. Whitfield denies the charges, saying police searched his house without presenting a warrant and only found marijuana that he used personally and a firearm he kept in his home. His previous three sentences, dating back to 1989, were allegedly for possession of marijuana, which he says he has only used recreationally. According to Whitfield, he suffered a stroke in 2007, which now forces him to use a walker. He also suffers from high blood pressure and has recently experienced numbness in his left arm. While Whitfield believes the prison officials at Solano are “fair, they’re only doing their job,” he also laments, “they should have sent me to rehab…they’re not trying to save my life, they’re trying to ruin it.” He continued, “I believe in second chances, I would love to see [some of my fellow inmates] go home – they don’t belong in here. This is overkill….we’re still human.” As of June 2013, the state of California had 133,000 prisoners, of which approximately 15,000 were over the age of 55. According to a 2012 Human Rights Watch Report, “incarcerated men and women typically have physiological and mental health conditions that are associated with people at least a decade older in the community. The U.S. incarcerates more people than any other country, with the number of inmates increasing 42 percent between 1995 and 2010, according to Human Rights Watch, and the number of prisoners 55-and-older skyrocketing by 282 percent. The increases are blamed on the ‘tough on crime’ and the ‘war on drugs’ policies enacted in the 1970s through the 1990s. (Photo by Andrew Burton/Getty Images)

One doctor in Scotland has proposed a novel idea to make prisons safer: give inmates marijuana.

Dr. Stephanie Sharp believes that giving prison inmates free marijuana could prevent violence and overdose deaths resulting from makeshift prison drugs. In Sharp’s opinion, inmates are going to use drugs either way—so what drugs would we prefer they use?

In the absence of marijuana, many inmates make drugs out of chemicals, prescription pills or other items they find inside the prison. Some inmates have even resorted to smoking coffee saturated paper for the caffeine high or snorting crushed up e-cigarette filters.

Inmates have also gotten ahold of synthetic forms of marijuana that are much more dangerous than the real stuff. There has yet to ever be a recorded death resulting from cannabis use. However, last year in Scotland, an inmate died after consuming synthetic marijuana known as “spice.” Prisons in the United States have experienced similar problems as synthetic forms of marijuana have made their way into the possession of inmates in states like North Carolina and Arkansas.

“Psychoactive substances like Spice are illegal but all they have to do is change a chemical and they become legal again. Because we are not addressing the issue of psychoactive drugs, we are condemning people to death in prisons and on the streets,” says Sharp to Civilized.

Sharp believes that legalizing recreational and medical marijuana will reduce these unnecessary drug-related fatalities. There’s also the potential for marijuana to reduce violence in prisons. Marijuana proponents have long noted the plant’s pacifying effects on users. One study found an average 13% reduction in violent crime in legal-marijuana states. Another study found a correlation between marijuana use and a decrease in domestic violence.

Cannabis has also been proposed as a way for people to reduce their use of more dangerous drugs, like opioids. In one study, two out of three pain patients swapped cannabis for opioid pain medications when given the option.

In addition to benefiting Scotland’s incarcerated populations, a program designed to encourage the substitution of cannabis for more deadly drugs could benefit the country’s general population.  In 2016 alone, 867 people in Scotland died from drug-related causes. This represents a 106% increase from the number of drug-related deaths just a decade prior. Most of these deaths involved prescription and illicit opioids.

Additionally, giving the general population access to legal cannabis would prevent many Scottish people from ending up in prison in the first place. According to 2014-2015 and 2015-2016 samples from the Scottish Government, roughly two-thirds of drug possession crimes in those years involved marijuana. Sixty-five percent of those arrests were young people between the ages of 20 and 39.

Still, Sharp’s proposal may be a long way off: recreational and medical marijuana are both still illegal in Scotland. A conversation around legalization is slowly gaining traction in the country.