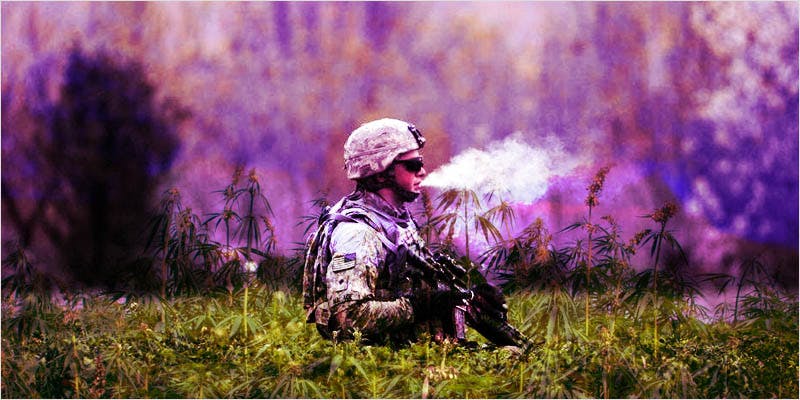 New Study: How Safe Is Cannabis To Treat PTSD Symptoms In Veterans?

A major focus of the study is to measure the safety and efficacy of using cannabis to treat the symptoms of chronic PTSD.

A new study has been recently approved that will study the effects of medical cannabis on a number of medical conditions, one of which has been prevalent among the nation’s veterans who are now looking to the substance to treat themselves.

What is the study?

The recently-approved study will be financed by the state of Colorado and will be conducted by researchers Johns Hopkins University, the Multidisciplinary Association for Psychedelic Studies (MAPS), the Scottsdale Research Institute, the University of Pennsylvania, and the University of Colorado.

A major focus of the study, according to MAPS clinical trial chief Rebecca Matthews, is to measure the safety and efficacy of using cannabis to treat the symptoms of chronic PTSD.

Participants are then tasked with repeating the first phase of the study again, and then recording their PTSD and its symptoms for the following six months. The study will likely run for a total of around two years.

Why is the study important?

According to a study conducted by the RAND Corporation, around 2.7 million American veterans, including at least 20% of veterans of the Iraq and Afghanistan conflicts, suffer from PTSD and/or depression.

Because the effects of PTSD on veterans are both so widespread and so severe, and addictions to prescription painkillers so dangerous when trying to combat its effects, veterans nationwide begun turning to medical cannabis for treatment.

While full-scale studies on the substance’s efficacy in regards to PTSD treatment remain scant, veterans suffering from the condition have nonetheless found overwhelming evidence to suggest that cannabis is helpful in PTSD treatment.

For researchers like Matthews, undertaking the study is vital to understanding both the safety and the efficacy of PTSD treatment using cannabis.

By working with chronic treatment-resistant veterans, we address a national emergency and limit variability at the potential expense of generalizability. Further research will be needed to determine if these results will apply to other groups of PTSD sufferers.

Dr. Sue Sisley from the Scottsdale Research Institute in Phoenix is the study’s principal investigator and was instrumental in pushing the country’s largest veterans group to endorse the possible use of medical cannabis. She says that cannabis presents great potential to veterans looking to treat their PTSD with the substance.

I have no preconceived notions about the outcome of the study. I’m not pro-cannabis; I am strictly pro-science. I’m actually not a fan of cannabis, and I’ve never tried it personally. I care deeply about our military veterans, and I am determined to find new treatments for PTSD – besides the only two [Food and Drug Administration] approved medicines on the market, Zoloft and Paxil, which are both highly disappointing.

Why has this sort of study not been done before?

The Drug Enforcement Agency currently classifies cannabis as a Schedule I federally controlled substance, meaning that they consider both its health risks and medical potential to be on par with such other substances as heroin and cocaine. As a result, research into the effects of cannabis, particularly its effects on PTSD, have been scant.

That may be about to change. While the DEA recently refused to reclassify cannabis’ Schedule I status, it opened the door to increased medical testing of the substance.

Few researchers believe that medical cannabis may be used as a perfect medical treatment, particularly for such debilitating conditions as PTSD. However, researchers like Sisley argue that only further study will be able to determine the substance’s precise efficacy in regards to medical treatment.

Nobody is arguing [cannabis] is a cure [for PTSD]. What we are hoping is that cannabis is alleviating the suffering of PTSD patients and not just masking it. This is a distinction that can only be evaluated through a randomized controlled trial.

Do you think that more testing should be conducted into the possible medical benefits of cannabis? Tell us why on Facebook, Twitter or in the comments below.