His mother wanted to do anything she could to help him, and after searching for answers, Landon’s grandmother suggested cannabis oil. 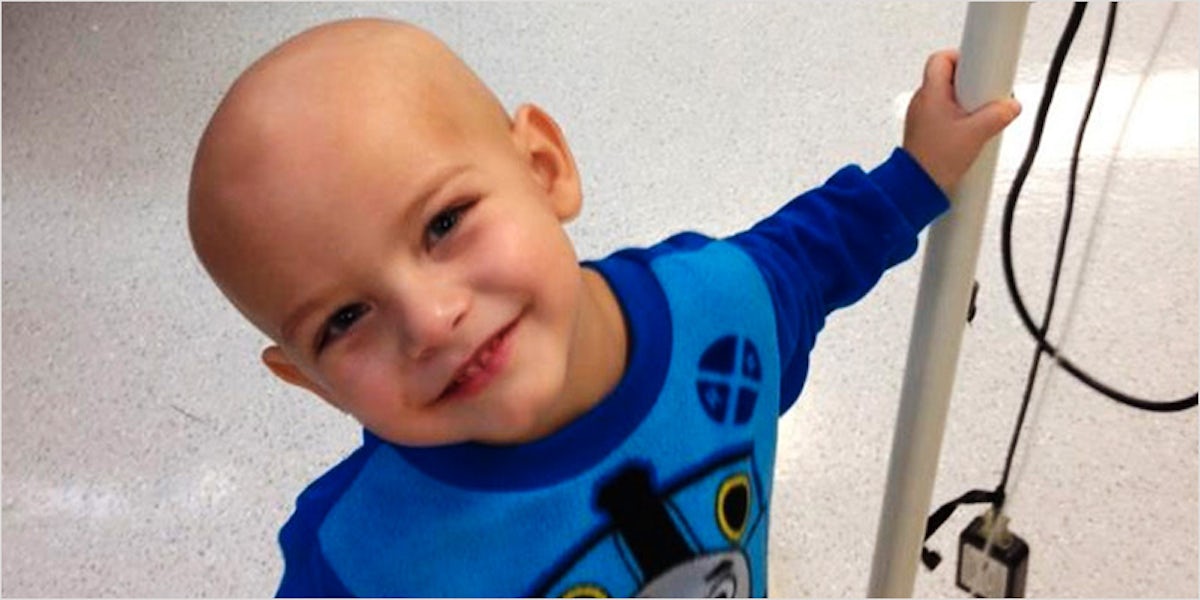 In Utah, cannabis oil is not an available option for the treatment of illnesses. Next door in Colorado, however, it is. This glaring contrast has led many of patient to travel the distance to find relief, and for one little boy, it has saved his life. Now his family is another of hundreds or medical marijuana refugees. This is the story of a boy who was given 48 hours to live, and is now in remission, thanks to cannabis. Check out the full story in the video below.

At just 3 years old, Landon came down with a sore throat and swollen lymph nodes one evening. At first, his doctors thought it was a virus. It turned out to be acute lymphocytic leukemia or A.L.L. It is a cancer of the blood and bone marrow. Thankfully, it is one of the most treatable, but the treatment itself would be torture. Chemo wracks the body and overwhelms even the toughest of adults, let alone a small child.

“His whole chest was full of leukemia tumors, which is why he couldn’t breathe. They started him on chemo, but told us that he probably wasn’t going to make it,”

Landon’s parents were told when he began chemo that he only had an 8%-10% chance to live for the next 24-48 hours. He held on, despite the odds, though he was nauseous, vomiting, and barely able to walk or talk. His mother, Sierra, wanted to do anything she could to help him, and after searching for answers, Landon’s grandmother suggested medical cannabis.

“We discussed all of our concerns with his medical team in Utah and watched Landon continue to suffer and wither away as the piled on drug after drug. Then my mother came across cannabis oil online.” – Sierra

Landon bounced back, able to eat, sleep, and just be a kid again. His mother thinks that the cannabis is not only helping him with the side effects of chemo but actually healing him.

“I think that the chemo in combination with the cannabis did put him into remission, and now cannabis will keep him there.” – Sierra

“Our hearts were filled with joy that cannabis brought back the smile to Landon’s face. Landon started getting better and better! It was as if a miracle had happened! He was smiling again and started to eat again!”  – Sierra wrote on her blog

“It is atrocious that anyone on the planet would be charged for choosing cannabis over pharmaceuticals. My heart goes out to Adam Koessler and Rumor Rose, along with uncountable other families that are affected by cannabis prohibition. Get ready for the fight of your life. Having a sick child is a battle in itself, but making this choice is a whole new world. You’re going to need thick skin, intuition, and a solid team. Don’t waste time making sure every other pharmaceutical does more harm than good. If it feels wrong in your gut, it’s probably wrong,”

More than one fight

Leukemia isn’t the only fight in the Riddle family right now. Sierra is so sure of the healing properties of cannabis, that six months after her son started the treatments, she decided to stop his chemotherapy altogether. Her argument: the chemo was too toxic, and the cannabis was not. Her son’s doctors, however, were not as enthusiastic.

“The options were to either, you know, voluntarily agree to the chemo and steroid plan for the next 3 years, or to refuse it in which they would take a score and have a court-ordered anyways and the possibility of them removing Landon from my care would come into play at that point.”

Sierra went and found Warren Edson, an attorney willing to take on the case.

“It didn’t appear that she was doing anything wrong other than just being a mom, and doing what’s best for her kid.” – Edson

The family and their lawyer met with Landon’s doctors hoping for a modification of his chemo schedule but has been forced to give Landon chemo at least once a month.

“I want Landon to know that we did everything in our power to be compassionate in his care, and to protect him.” – Landon’s grandmother Wendy

Landon’s doctors admit that, as of November of last year, it had been 9 months since any regular course of chemo, and he was still in remission.

Do you think that a parent should have final say over what treatments their child should or should not have? Is it right for doctors and the state to take a child from their parents’ custody? Share your thoughts on social media or in the comments below.

Get 20% off premium weed and discover the latest products, news, and deals in cannabis.
April 22, 2016 — Last Updated December 19, 2019
Written by Christopher Teague