Now Reading:health | How Women Are Using Marijuana to Take Control of Their Health 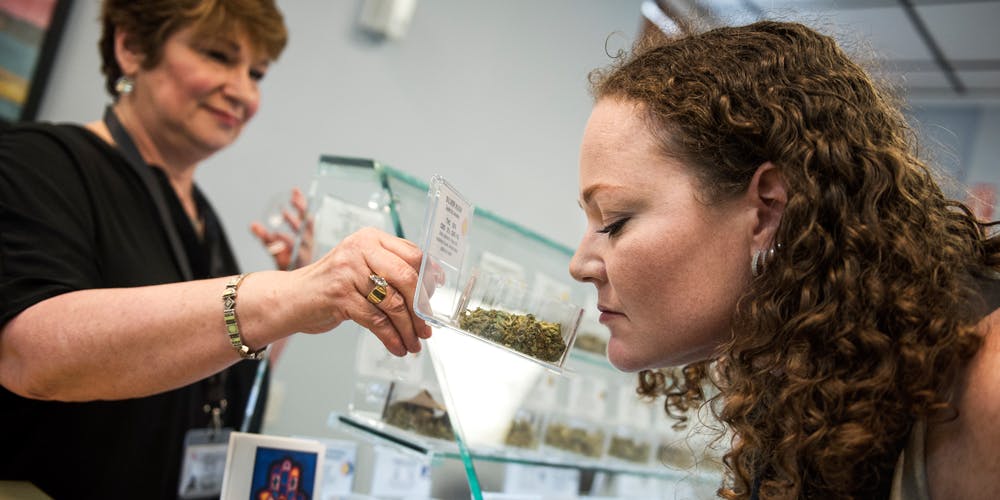 UNITED STATES – AUGUST 30: Meredith Bower, a customer at Takoma Wellness Center in Takoma Park, is shown inventory by Stephanie Kahn, owner of the medical marijuana dispensary, August 30, 2016. Bower suffers from phantom limb pain due to the amputation of a leg below the knee after a car accident. (Photo By Tom Williams/CQ Roll Call)

How Women Are Using Marijuana to Take Control of Their Health

This survey serves as yet another form of proof that marijuana really is the ultimate women’s medicine.

Women and weed have always been a match made in heaven. According to Sicilian Greek historian, Diodorus Siculus, cannabis’ use as a women’s medicine dates back to as early as 2,000 B.C. During that period, Egyptian women supposedly relied on marijuana to relieve them from their sorrows and frustrations. Here we are nearly four thousand years later, and not much has changed. The latest installment in BDS Analytics’ Cannabis Wellness Trends Series is revealing that women are still regularly choosing cannabis as their ultimate medicine.

Each of the Women’s Health Consumer Insight Survey’s 1,281 participants resides in one of the four states where weed sales are legal: Oregon, Colorado, California, and Washington. BDS Analytics discovered in their findings that there are three primary conditions that are driving four out of ten females to seek cannabis as a natural alternative medicine for self-care:

Pre-menstrual pain and cramps are primarily driving women to turn to cannabis for relief. According to the Women’s Health Consumer Insight Survey, 39% of women consumers use marijuana to cope with symptoms of menstruation. This finding isn’t all that surprising, considering the abundance of weed-infused products dedicated to easing away your lady pains. Oh, and the fact that over-the-counter brands like Midol are essentially a waste of time.

One of the top cannabis brands for women with painful periods is undoubtedly Whoopi & Maya, a line consisting of bath soaks, cacao butter spread, body balm, and an herbal tincture, all of which are either infused with THC, CBD, or both. Whoopi Goldberg refers to marijuana as the “new penicillin for period pain.” Based on the line’s several pages worth of 5-star testimonials, it’s safe to say that’s not a far-fetched statement. “I was in sooooo much pain, emotional, and anxious. This product definitely contributed to the miracle of healing and relief that I received with much prayer and meditation during this difficult time,” one of them reads.

2. Menopausal women often rely on marijuana to manage their symptoms

Cannabis consuming women don’t just fall under one particular age group. In addition to the younger generation of ladies, older women also frequently turn to marijuana to relieve symptoms of various conditions, menopause being a top driver. BDS Analytics notes that “older women transitioning through menopause may choose cannabis products to supplement or replace estrogen therapy, with 35% of menopausal consumers choosing cannabis to improve their sleep and 32% choosing cannabis to relieve their symptoms.”

Insomnia is one of the most talked about symptoms of menopause. Most women, in fact, will come face-to-face with insomnia well before menopause even begins. The condition occurs as a result of decreased estrogen and progesterone production, both of which help a person to fall asleep and remain asleep. The shift of hormones combined with other symptoms, such as hot flashes and increased anxiety that women experience during menopause can also lead to sleep disruption.

Luckily, THC-infused products, primarily those containing an indica strain, like Tahoe OF, are reported to help induce a peaceful slumber. Studies show that cannabidiol, or CBD, “may have therapeutic potential for the treatment of insomnia” as well.

For many women, having a fabulous sex life is paramount. Cannabis is proving to bring them just that. According to BDS Analytics’ survey, “27% of women consumers say they consume cannabis to enhance their sexual experiences.” And of all the female consumers, mothers are more likely to pair weed and sex.

Marijuana’s ability to elevate your sex life is well documented. Dr. Michael Eisenberg recently published a study in the Journal of Sexual Medicine, revealing that of 28,000 women, the ones who used marijuana daily had sex 7.1 times on average in a four week period, while women who didn’t consume the herb had sexual intercourse only six times. A 2009 study conducted by the Australian Research Centre in Sex also showed that women who used marijuana on the regular were more likely to have more sexual partners than those who didn’t partake.

Most women can agree that marijuana is the best medicine for them.

According to BDS Analytics, 37% of women agreed that consuming cannabis gives them a sense of control over their personal health in ways that other supplements cannot. In fact, the survey found that 25% of women consumers reduced their use of prescription medications, while 33% reduced the use of over-the-counter medicines.

The survey also discovered that more than half the women, from mothers to menopausal women to ladies in their 20s, use cannabis at least once a week. Speaking of moms, 54% of women that consume marijuana have children under the age of 18 living at home. And roughly two-thirds of those mothers use cannabis weekly, the survey notes.

As for the products women are purchasing, consumers ages 21-35 prefer inhalable cannabis products. Women 35 and up, on the other hand, enjoy edibles and topicals. But of all the age groups, the survey shows that flower is every woman’s top choice.

How do women prefer to smoke their flower? As it turns out, 35% of female consumers especially like rolling joints and spliffs or medicating with a pipe. But when it comes to dab rigs (2%), topicals (6%), homemade food or beverages (7%), and vaporizers (10%), women are less likely to choose any of those cannabis consumption methods.

BDS Analytics reveals that “49% of women agree that marijuana is the medicine for them.”

There’s still a ridiculous taboo surrounding women that consume cannabis. But if there’s any indication that marijuana isn’t just for men, it’s the latest installment in BDS Analytics’ Cannabis Wellness Trends Series. Their survey isn’t the only evidence we have to suggest that women and weed make an excellent pair, though.

According to the Cannabis Consumers Coalition, more women are consuming cannabis than ever before. About 11% more than men, in fact.