Here’s the real reason why weed is getting more potent 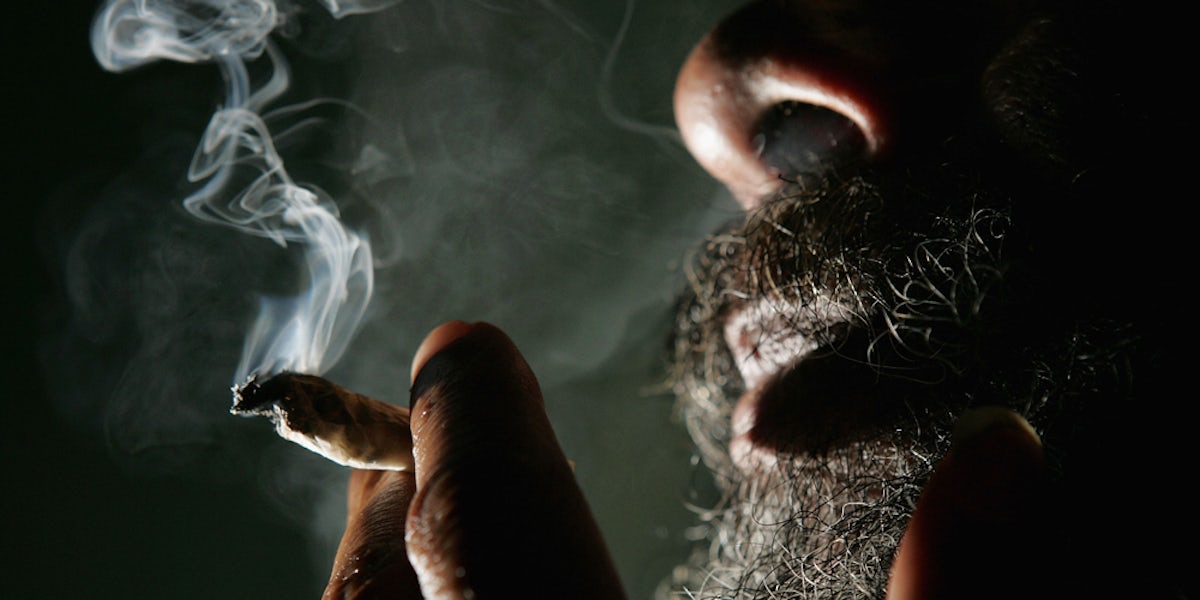 SAN FRANCISCO – NOVEMBER 29: Jonathan Beaver of San Francisco smokes a marijuana cigarette at the San Francisco Patients Cooperative, a medical cannabis cooperative, November 29, 2004 in San Francisco, California. The U.S. Supreme Court is considering whether people who have a doctor’s recommendation to use medicinal marijuana in 11 states with medical marijuana laws, can get around a federal ban on using marijuana. (Photo by Justin Sullivan/Getty Images)

Every era of cannabis has had its share of legendary strains. But today’s top-shelf weed, according to the government, is, on average, more potent than ever before. Why is that?

When federal agencies began measuring the THC in seized cannabis in 1975, the average THC level was less than 1 percent. That had improved to just under 3 percent a decade later, according to government numbers. By TWO decades later, in 1995, the average was still just under 4 percent.

That’s right around the time a cultural change started sweeping across America, changing it forever. In 1996, Californians made their state the first in the nation to legalize medical marijuana; Hawaii, Oregon and Alaska followed two years later. And, not so coincidentally, with the rise of medical breeding in the States, those THC numbers started zooming upwards.

By 2014, the THC average had risen to 12 percent, according to federal numbers, representing the big shift from a market characterized by budget imports like Mexican brick weed, to one dominated by artisanally grown domestics. Others would set that THC average even higher. “We’re looking at average potencies right now of around 20 percent THC,” said Andy LaFrate of testing lab Charas Scientific in a 2015 video released by the American Chemical Society, reports CBS.

In today’s market, where top-shelf strains routinely measure in the mid to high 20s in THC percentages, anything under 20 percent is considered mid-shelf. And weed that measures under 15 percent is commonly consigned to the bargain bin.

The highest THC level in flowers ever recorded by the federal Drug Enforcement Administration was 33 percent from weed seized in a 2009 bust. Scientists at the federal Potency Monitoring project at The University of Mississippi say they’ve tested cannabis samples as high as 36 percent THC, reports PBS.

Flowers in shops and competitions often measure even higher than this, but there are persistent questions about the accuracy of these lab numbers, particularly since certain unethical testing labs have been caught inflating results for cash.

From Seeded Weed to Sinsemilla to Super Strains.

A revolution happened in the mid to late 1970s when it came to consumer expectations when buying weed. Folks had always expected marijuana to have seeds in it, until growers started taking out all the males to produce seedless female flowers. Many call this sinsemilla (from the Spanish word for “seedless”). The transition from seeded buds to sinsemilla was sensational, in terms of marketing cachet. When both were available in the late 1970s, seeded Columbian brought $40 to $50 an ounce, while sinsemilla ran $100 to $120.

Cultivation practices in the cannabis community, including letting the flowers mature longer and trimming them more closely once harvested, had a role in increasing THC numbers. But a bigger reason those averages have climbed just about every year since 1996 is genetic selection by breeders who are looking to breed the most potent buds on the block.

High THC varieties have high cash value—that’s the bottom line. New, even stronger combinations of popular, potent strains are being created all the time by breeders.

Buying By the Numbers.

Now that weed is legal in more and more locales, many consumers are buying by the numbers. That means high THC numbers on the lab results translate directly into higher sales in the shops.

That same scenario, of course, applies to the black market. People want weed that gets them very high, very fast, and will pay more for it. That’s a mighty financial incentive for black market growers to produce the most potent weed possible.

In addition, the needs of many medical marijuana patients for high-potency weed to combat pain and nausea has been a driving force in the breeding of the ultra-potent strains characteristic of the 21st Century. Many patients need near-instant, powerful pain relief, and they don’t need to have to smoke a bunch of mediocre marijuana to get it.

Beyond THC: Terpenes and More.

The truth is, of course, there’s a lot more going on with good cannabis than just the THC. All of the cannabinoids interact in complex ways we don’t yet fully understand. Many also believe that marijuana’s various compounds need to work together, in concert, known as “entourage effect.”

As well, the terpenes, the aromatic compounds which lend different strains their distinctive smells, potentiate and affect the high in ways that scientists are currently studying. Fortunately, consumers are starting to catch on to the importance of these other plant components.

The next few years are going to be an exciting time as we learn more and more about what exactly distinguishes extraordinary cannabis and makes it so memorable.

Get 20% off premium weed and discover the latest products, news, and deals in cannabis.
December 29, 2017 — Last Updated
Written by Steve Elliott