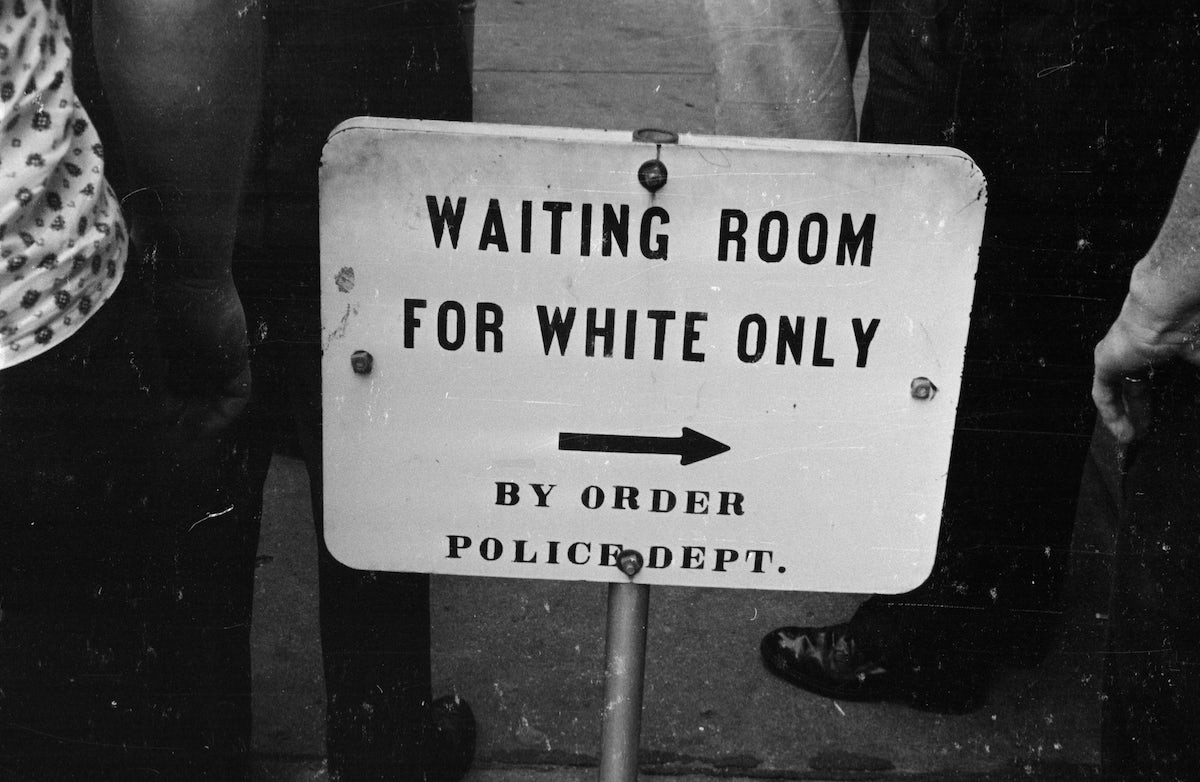 25th May 1961: A police sign for a ‘white only’ waiting room at the bus station in Jackson, Mississippi. (Photo by William Lovelace/Express/Getty Images)

For those living in cities and states that continue to enforce marijuana prohibition, a citizen’s experience with law enforcement still depends largely on the color of their skin. Where law enforcement officers might swoop into a poor, black neighbourhood and confront a young black man smoking a joint, handcuff him and drag him into the city jail, these same officers might confront a white college student smoking a joint, toss their weed into the sewer and tell them to move along (an actual story told by New York City’s Police Commissioner).

In many ways, these scenes are hardly a departure from the civil-rights era imagery of your high school history class: two Americans ride the same bus—one sits up front, but the other is castigated for occupying the same space.

Marijuana as a criminal offense has always been similarly enforced along racial lines. When the civil-rights movement ended in the late 1960’s, Richard Nixon responded by declaring a “war on drugs” in the early 1970’s. Almost immediately, the nation’s segregational priorities shifted from buses to blunts; from voting booths to courtrooms; from fat, rich white guys denying you a job, to fat, rich white guys denying you probation and the ability to get a job. America’s racist policies and double-standards were not expelled in the 60’s and 70’s—they merely became better hidden.

Recent books and documentaries have broken ground in bringing this history to mainstream consciousness—history that we are currently living through. But it isn’t only the enforcement of marijuana laws that racially discriminate.

Since recreational marijuana was first legalized nearly six years ago, seven states and the District of Colombia have followed suit; twenty-nine states (and D.C.) currently permit the use of medical marijuana. For many, this wave of legalization signaled hope for those who, for decades, have been unjustly targeted by the war on drugs. Finally, the “crime” of marijuana use was being publicly vindicated for what it is and always has been: a harmless recreational and medicinal product, by all accounts much safer than other substances like alcohol or tobacco.

Much like the moonshiners of rural, prohibition-era Appalachia, many hoped, marijuana “dealers” of America’s city street corners would have an opportunity to step out of the shadows and open legal enterprises. Those who had campaigned for legalization hoped to use the movement’s wave of support to redress the racial injustices of the past and present, for which concrete policy measures have lagged.

But as these campaigns moved forward, polling results painted a grim picture of the country’s priorities for legalizing marijuana. Voters, the polls showed, were less likely to support the legalization marijuana if the campaign messaging focused on issues related to race, such as blatant disparities in sentencing for white and black Americans who had committed the same “crimes.”

What America wanted, these polls suggested, was to legalize the goofy, white stoner—the Tommy Chongs and Seth Rogens of the world, not the Wiz Khalifas or Snoop Doggs.

So when marijuana was finally legalized in states like California, Massachusetts, and Washington, those profiting from decriminalization began to look an awful lot like those who once benefited from prohibition. The legal marijuana industry even enshrined these preferences in carefully developed legal processes. As Amanda Chicago Lewis writes in her extraordinary investigation for BuzzFeed News, “In most states that allow the medical use of marijuana, a small, unelected commission determines who will receive a limited number of business licenses… At least six states and Washington, D.C., emphasize vague and coded qualifications like ‘character.'” In other words, if you’re black and the person reviewing your case has an implicit racial bias—as studies have shown we all do—then too bad: there are no specific legislative clauses to guard against racism, implicit or explicit.

In legalizing marijuana, while refusing to address its long and well-documented history of being used as an excuse to strip black Americans of their fundamental freedoms, we are deciding to once more turn our backs on justice in favor of advancing white prosperity. Perhaps the most staggering number produced by Lewis’ investigation was her finding that “fewer than three dozen of the 3,200 to 3,600 storefront marijuana dispensaries in the United States are owned by black people — about 1%.”

The reasons for black Americans’ exclusion from the newly minted legal marijuana industry are many, spanning from clear racial bias to more entrenched economic disparities, and are the result of generations of discriminatory policies.

Consider the fact that those applying to enter the marijuana industry are required to report any past convictions, which can disqualify them from obtaining legal permits—even if their convictions were for non-violent marijuana-related crimes that have since been decriminalized. One glaring problem with this (and there are many), is that despite marijuana being used and sold at virtually equal rates between whites and blacks, black Americans are 3.73 times as likely to be arrested for marijuana possession,” according to the American Civil Liberties Union.

Other studies cite even higher numbers. As Lewis notes, “in every county in America during the war on drugs, black people have been between two and ten times more likely to get arrested and serve long sentences for drug crimes than white people.” And in Mendocino County—one of three counties in California’s Emerald Triangle where up to 70% of the total marijuana in the country is grown—as recently as 2014, black people were ten times more likely to be arrested for marijuana-related crimes than white people.

These numbers are particularly confounding considering that, as Michelle Alexander writes in The New Jim Crow—Mass Incarceration in the Age of Colorblindness, “The National Household Survey on Drug Abuse reported in 2000 that white youth aged 12-17 are more than a third more likely to have sold illegal drugs than African American youth.”

Realizing the injustice of these licensing laws that effectively bar black Americans from joining the state’s legal marijuana industry, cities like Oakland have enacted policies that prioritize black applicants with prior marijuana charges on their criminal records for legal permits. Campaigns, like those launched by the Minority Cannabis Business Association and Marley Natural, have cropped up in cities like Portland and Seattle to help people get their non-violent marijuana crimes expunged from their records.

But as Berrin Noorata from Marley Natural explains to me, “…we found that many applicants were not getting through the final approval process for expungement because of unpaid fines. The inability of people with records to pay their fines is one of the primary reasons people get stuck in the prison pipeline and are never able to fully move forward with a clean slate.”

If someone does not have enough money to even pay their legal fees, how can they be expected to source capital for launching an entire business? In an industry where federal prohibition has excluded cannabis-related businesses from accessing banks and small business loans, this means that only those with prior wealth can afford startup costs.

“Capitalization, raising capital for any business whether it’s in the marijuana industry, or whether it’s in the computer industry, it’s a challenge at best—a very difficult task for minorities to raise capital. We don’t have the historical financial background or record to obtain the initial capitalization.” John F. Robinson, President, and CEO of the National Minority Business Council tells me. “It’s a lot of economic growth and boom for a lot of the states and cities because of the legalization of the sale of marijuana. But on the flip side, if people are not benefiting across the board, it will still be a white person’s industry.”

In recent years, movements like Black Lives Matter, and groundbreaking pieces of journalism have galvanized important conversations about how to address America’s legacy of racism. Yet, many progressives still seize up when it comes to concrete policy measures like reparations. One difficulty in building widespread support is getting enough people to understand the connection between past injustices, and today’s inequities. But the legalization of marijuana is a historic event unraveling before us. It is an opportunity to fight racial inequities in real-time, with thoughtful, candid and direct policies.

So far, significant progress has been made in the realm of marijuana’s normalization and reintroduction to society as a benign substance. But regarding healing racial divisions and injustices, unless immediate changes are made, the industry will continue to represent, as Robinson believes, a step backward.

Cannabis For You, Near You
Join the Herb community and get exclusive offers, early access to products, and good vibes.
October 08, 2017 — Last Updated
Written by Rob Hoffman