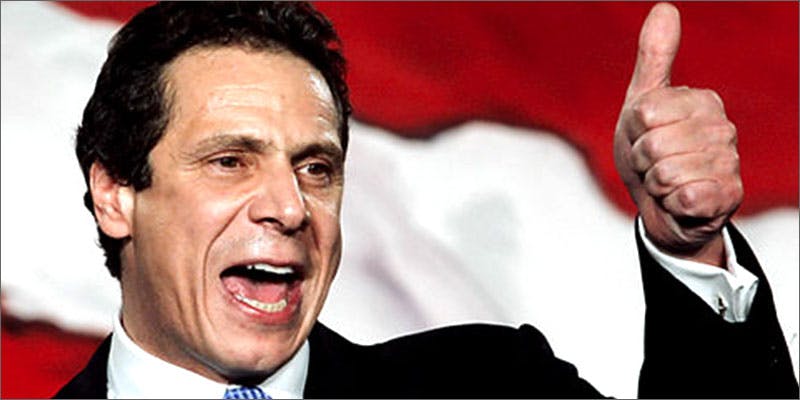 This New York Governor Thinks Cannabis Should Be Decriminalized

Governor Andrew Cuomo, a democratic governor from Albany, New York is pushing for the decriminalization of cannabis possession.

Andrew Cuomo, a democratic governor from Albany, New York is pushing for the decriminalization of cannabis possession. While the state continues to treat possession as a misdemeanor, millions of tax dollars are being wasted enforcing these laws and prosecuting individuals. To follow in the footsteps of surrounding states and in accordance with public opinion, this governor sees no reason to further waste assets and time, when cannabis crimes generally do not affect or endanger the public’s well-being.

Second time around for Andrew Cuomo

On Wednesday, Albany, New York’s Governor Andrew Cuomo presented a 380-page State of the State message to the State Legislature outlining a number of changes he would like to see take place in the upcoming months.

One of the mentioned changes is the decriminalization of cannabis possession in small amounts.

This is the second time Gov. Cuomo has appealed to the higher powers, pointing out the many wasted resources surrounding the arrest and prosecution of these low-level crimes.

In 2012, Gov. Cuomo presented a similar request that was dismissed by then-Senate Majority Leader Dean Skelos. Skelos mocked the measure, making some memorable comments that were later ridiculed on the comedic program, The Daily Show,

Being able to just walk around with 10 joints in each ear and it only be a violation, I think that’s wrong.

In his new report, Gov. Cuomo stated that in 2010 an estimated $75 million was used to arrest and jail individuals who were found to be carrying small amounts of cannabis.

He also mentioned New York’s 2014 legalization of non-smokeable medical cannabis and neighboring Massachusetts’ outright legalization just months ago. Aside from the wasted funding, decriminalization is what the people want.

This measure reflects the national trend and dramatic shift in public opinion.

Some members of the State Legislator fear that decriminalizing will be lead to a higher rate of illegal sales and trafficking across the state. Gov. Cuomo addressed these concerns, ensuring the sale of cannabis would not be permitted or go unpunished.

The illegal sale of marijuana cannot and will not be tolerated in New York state, but data consistently show that recreational users of marijuana pose little to no threat to public safety.

Whereas other states have sought the full legalization of marijuana, this legislative change will specifically affect individual users and not reduce penalties on those who illegally supply and sell marijuana.

In addition to outlining these points, Gov. Cuomo also mentioned that nationally, 90 percent of cannabis arrests are made for possession, not distribution. These regulation changes could save the state millions of dollars and free up officials to focus on more serious, threatening crimes.

While the exact amount of cannabis that could be carried remains unclear, the changes outlined in Gov. Cuomo’s State of the State message are meant to modernize the laws throughout New York.

Not only will they focus more on hard crimes, there will be stricter punishments and harsher penalties for those who continue to commit such infractions.

Despite some push back from the republicans, Gov. Cuomo hopes the State Legislature will take his recommendations into consideration and help to advance the state into the future.