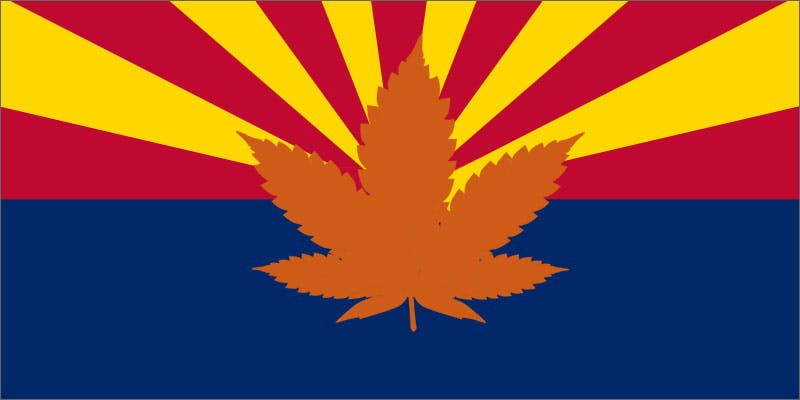 The legalization battle just got a little heated in Arizona. A large pharmaceutical company paid big money to squash Proposition 205.

It’s commonly thought that cannabis remains illegal because the herb is unsafe or is not studied enough. However, there may be a darker side to the story.  Insys Theraputics Inc., a pharmaceutical company known for its powerful opioid drug, recently donated big money to an Arizona anti-legalization campaign. Arizonan voters will choose whether or not to legalize cannabis this November. Here’s how the maker of a drug fueling the heroin epidemic is lobbying to keep weed illegal.

Arizonan voters legalized medical cannabis in 2011. Dispensaries in the state have taken off, and thousands of patients are now able to access safe and effective medicine. This November, Arizona voters will once again have the opportunity to move forward with cannabis.

Proposition 205 seeks to legalize recreational cannabis for adults 21 and over. Adults will also be able to grow up to 6 cannabis plants for personal use and regulate the herb like alcohol.

The taxes placed on the herb will bring in significant revenue for the state. Last year, neighboring Colorado brought in over $135 million in tax revenue from their cannabis sales.

Yet, one pharmaceutical company is not happy about the initiative. Legalization in other states has not increased teen use of cannabis, but instead has provided millions and millions of dollars for public services like education, and has stimulated the growth of small businesses and tourism.

This isn’t even to mention the copious medical benefits associated with the herb. These benefits aren’t good enough for Insys Theraputics Inc.

Rather, the Arizona-based pharmaceutical company has contributed $500,000 to squander Proposition 205. Specifically, they donated to Arizonans for Responsible Drug Policy. An organization which believes that keeping cannabis as an illicit, black market substance is a more effective way to keep the herb away from teens.

Sorry, ARDP members. It’s far easier for your kids to buy herb in behind their school gymnasium than it is for them to buy government-regulated products like alcohol. In Colorado, teens actually use less cannabis than teens in the rest of the country.

The organization also relies on fear tactics, suggesting that though the tax revenue is promised for schools, the money will actually go to “creating more government”. Obviously, more employees will be needed to oversee cannabis regulation, but that also means that more people will have stable employment.

Insys Therapeutics Inc. has good reason to want tight regulation on cannabis. They’ve sunk a lot of time and resources into the synthetic cannabis medicines.

Earlier this year, the FDA approved a new cannabis-based pharmaceutical created by Insys. The drug hopes to treat wasting in cancer and HIV/AIDS patients. Funny thing, two other cannabis drugs already exist for these exact symptoms.

A little superfluous? Perhaps. Yet, Insys may have another reason to fear cannabis legalization. This is the same company currently only markets one product: a fentanyl spray.

Fentanyl is an opioid pain medication that’s now contributing the U.S. heroin epidemic. Fentanyl is more powerful than traditional opiates and claims thousands of lives each year. How many people have died from cannabis? None.

The drug is also thought to be 25 to 50 times stronger than heroin, which is why it has made its way to the black market. It is often sold as a street drug and cut with other substances, increasing risks.

The medication is also blamed for the growing number of heroin overdose deaths across the U.S. In 2014, 5,500 people died from opioid overdoses, most of them related to Fentanyl. This was an 80% over overdose deaths from 2013.

The large numbers of complications with this drug inspired the Drug Enforcement Agency (DEA) to issue a warning about Fentanyl last year. Fentanyl, the said, is a threat to health and public safety. Yet, Arizonans for Responsible Drug Policy still accepted half a million dollars worth of opioid money.

Why is cannabis a threat?

Research has shown that simple ol’ cannabis manages chronic pain significantly better than opiates. The herb has a far higher margin of safety, and politicians are already advocating for the plant as a way to address rising rates of opioid and heroin abuse.

With legal recreational cannabis, evidence suggests that fewer people will seek out prescription drugs. Including opioid painkillers and possibly cannabis-based pharmaceuticals. So, is the herb a threat to big money? It sure seems like it.

The future of the cannabis plant is tangled in a convoluted web of money, politics, and public rights. The American public may not be able to cough up half a million dollars to support legalization efforts in a single state, but we can still vote.

Fighting against big money is difficult, but not impossible. To succeed, nothing is more important than turning in as many ballots as possible. Please vote!