The feds seize money from people who have never been charged with a crime and then use it to crack down on the cannabis industry. 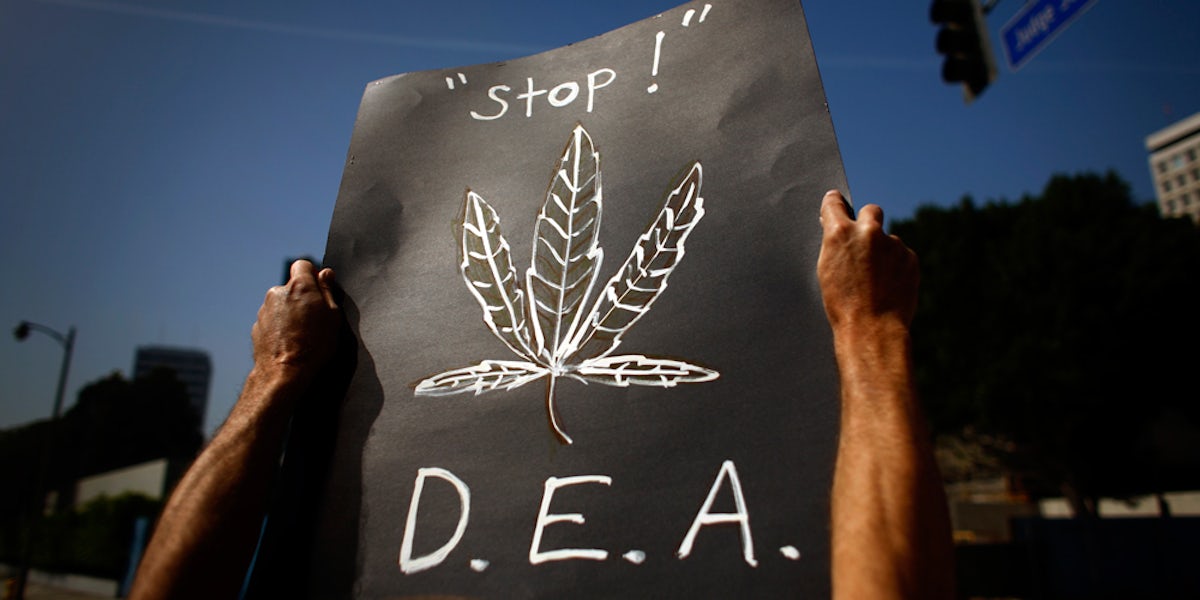 Supporters of medical marijuana use and distribution gathered to protest raids and closures of stores by the Drug Enforcement Agency (DEA) in downtown Los Angeles on Tuesday, March 25, 2008. (Photo by Jay L. Clendenin/Los Angeles Times via Getty Images)

On January 17th, Congressmen Ted Lieu (D-CA) and Justin Amash (R-MI) re-introduced the Stop Civil Asset Forfeiture Funding for Marijuana Suppression Act, known as H.R. 4816. The bill aims to prevent the federal government from funneling funds seized from people who have never been charged with a crime to a nationwide law enforcement program which targets the cannabis industry.

This process of seizure, called civil asset forfeiture, has led to highly questionable abuses of power by law enforcement across the country. The money from the seizures then, in part, has been going toward the Domestic Cannabis Suppression/Eradication Program, which the Drug Enforcement Agency (DEA) describes as “the only nationwide law enforcement program” to exclusively target cannabis cultivators and distributors.

The program has lead to the disposal of over 5 million cannabis plants and the arrest of more than 5,000 individuals involved in the cultivation of marijuana last year. These efforts earned the DEA over $51 million in seized funds.

“Civil asset forfeiture is an unconstitutional practice whereby the government takes people’s property without due process,” said Amash in a statement. “The DEA’s use of proceeds acquired through civil asset forfeiture to expand marijuana enforcement—a state-level issue—makes the already unacceptable practice even worse.”

Civil forfeiture laws permit law enforcement officers to confiscate suspects’ assets—money, cars, even entire homes—even if they’re never charged with a crime. Dispensaries have been subject to raids and seizures under these laws.

In the years between 2007 and 2016, the DEA seized roughly $3.2 billion from Americans who had not even been charged with a crime, according to a 2017 Department of Justice report. Shockingly, this type of forfeiture represents 81 percent of the DEA’s total seizures in that period.

In a 2014 investigation, the Washington Post found that, since 2001, state and local police had taken nearly $2.5 billion from Americans who hadn’t been charged with a crime.

There are a number of cases that exemplify the problems with forfeiture laws. In 2015, a 22-year-old black man named Joseph Rivers was taking a plane to Los Angeles with $16,000—his life savings—hoping to make it in the music industry. Instead, the DEA singled him out and, despite finding nothing drug-related in his possession and corroborating Rivers’ story with his mother, took all of his money without ever charging him with a crime. In another case, a black motorist was pulled over and had $3,500 taken from him for “[looking] like a drug dealer,” even though police never found any drugs in his possession.

One of the most common criticisms of civil forfeiture laws is that they incentivize policing. In Florida, for example, journalists uncovered situations where police departments were confiscating tens of thousands of dollars from drivers without providing any evidence of misconduct, often taking the money without filing criminal charges. In Louisiana, police have even used this confiscated money to fund personal vacations, like ski trips for entire police departments.

In other cases, a loose connection to a minor crime, such as a drug infraction, is enough for law enforcement officers to justify the seizure of peoples’ money or assets. In 2012, for example, an elderly couple had their home of 50 years taken from them after their grandson was caught selling $20 of marijuana on the porch.

Jonathan P. Caulkins, Professor of Operations Research and Public Policy at Carnegie Mellon University,  points out, however, that when civil forfeiture laws are used properly they can “very valuable.” “They’re pretty useful for things like cocaine kingpins,” he said. But because civil forfeiture laws are powerful tools, they also have the potential to be abused. “I think part of what this probably boils down to is how much do you trust your friendly neighborhood government prosecutor,” Caulkins said.

Lieu hopes that California’s recent legalization of recreational marijuana—the state with the country’s largest economy and marijuana market—will encourage the DEA to reconsider the practicality of the Domestic Cannabis Suppression/Eradication Program. However, the DEA continues to target cannabis growers in states like Washington, where recreational marijuana has been legal for adult use since 2012. Over 35,000 plants were eradicated in Washington in 2015.

“The Federal Government has a responsibility to spend taxpayer money wisely,” said Lieu in a statement. “Instead, AG Jeff Sessions would rather waste federal dollars by attacking marijuana, which has been legalized either for medical or recreational use in the majority of states in the U.S. The DEA’s Domestic Cannabis Eradication/Suppression Program is a waste of time and money and runs contrary to the will of the people.”

Get 20% off premium weed and discover the latest products, news, and deals in cannabis.
February 04, 2018 — Last Updated
Written by Rob Hoffman