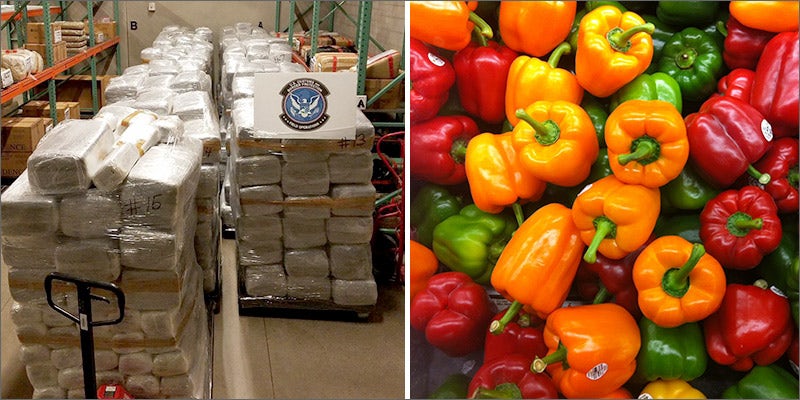 Forget everything you thought you thought you knew about smuggling, as it turns out almost any product can and will be used to smuggle weed across borders, which this latest seizure proves.

Another day, another massive drug bust

From planes, trains, and automobiles, to oversized cigars and even the tried-and-true way of having packages taped to the mules, there are many ways that would-be smugglers attempt to get weed into the United States.

But instead of getting too creatives, the smugglers went simple in the latest attempt to get some Mexican green – a whole lot of it, too – across the border.

The load of “green” peppers was found in a tractor-trailer unit on Saturday, May 13, at the Mariposa Commercial Facility at the port of Nogales, Arizona. Along with the peppers and weed being seized, the driver – a 46-year-old Mexican national – was also taken into custody by the officers.

The Arizona border agents said the seizure netted more than 13,700 pounds of weed, which is worth an estimated of $6.85 million, but there were no estimates on the price of bell peppers.

But the customs agents didn’t rest on their laurels, as the same day brought another big seizure, this time of cocaine. After inspecting a Ford SUV at the Dennis DeConcini crossing of the Nogales port, the Customs and Border Protection officers found more than 34 pounds of cocaine hidden in the back seats of the vehicle.

The cocaine is said to have an estimated value of nearly $386,000. The 29-year-old Mexican national, who was driving the SUV, was taken into custody and his vehicle was seized, as was the cocaine.

Planes, trains and lots of fruit

From fake key limes to hollowed-out firewood, border agents are seeing more and more of these creative and bold attempts. With the drugs coming south of the border, the smugglers seem to favor methods that see the drugs hidden in shipments of produce, be it the aforementioned limes, cucumbers, jalapeños, coconuts and watermelons.

But it also includes Mexican-made Fords, too. Instead of smuggling weed in peppers, you should try smoking some weed out of a pepper.

Get 20% off premium weed and discover the latest products, news, and deals in cannabis.
May 20, 2017 — Last Updated December 03, 2019
Written by Todd Farmington