British Cannabis Legalization Could Eliminate NHS Deficit, According To Report 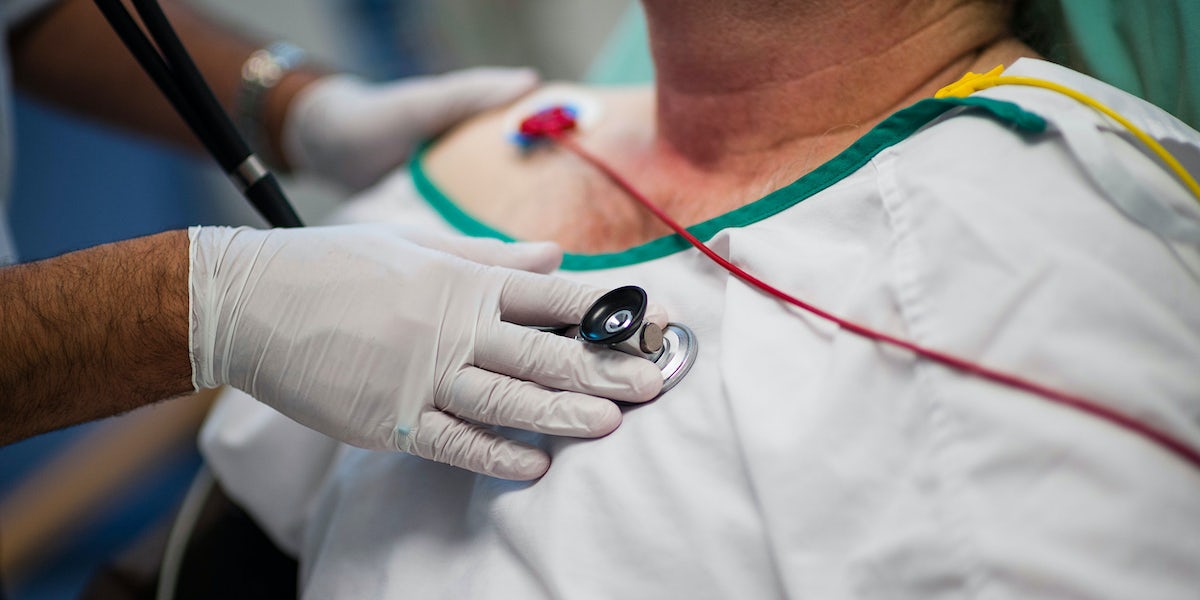 A doctor using a stethoscope on a patient in an Accident and Emergency department of a NHS national health service hospital., Wales UK (Photo by Photofusion/UIG via Getty Images)

Legalizing cannabis in the United Kingdom could cover the funding costs of the country’s National Health Service (NHS), a report conducted by NGO Health Poverty Action (HPA) finds. The potential worth of the British cannabis market at £3.5 billion, or $4.7 million.

“It is time to accept that prohibition is not only ineffective and expensive, but that regulation could—if it is done well—protect vulnerable groups and promote public health,” the report explains. “It would also generate both taxes (at least £1 billion annually, but potentially more) and savings, which taken together would mean more resources for health, harm reduction and other public services.”

The report breaks down the different models that the UK could take to implement cannabis legalization, from the Amsterdam-style cafe model to the commercial models used in Washington and Colorado. The estimate of £3.5 billion reflects a cannabis market worth £7 billion, and a system that would tax British cannabis sales at the same rate as alcohol or tobacco. A U.S. commercial model would yield a hefty profit of £2.26 billion.

The current NHS budget deficit is £2 billion, meaning that any form of British cannabis legalization would make a noticeable effect on the debt. The report also estimates that legalizing cannabis would save money by reducing enforcement and incarceration expenses—an estimated £291 million in savings on its own—as well as having the potential to reduce costs associated with alcohol abuse and other conditions. Alcohol abuse is a significant health issue for the NHS.

Across the Pond: British Cannabis Statistics vs. American Cannabis Statistics
In the US, states with medical cannabis programs saw a correlated drop in prescription drug costs for Medicaid fee-for-service programs, potentially saving them $1 billion. The same report estimated savings of $3.9 billion, with its findings including all Medicaid programs and total legalization of medical cannabis in America. Alcohol sales, the HPA report adds, decreased by 15% in states where cannabis was legal in some form.

“One way to conceive of these benefits is in the ways that regulation can help by both reducing harms caused by cannabis use and enabling us to explore the potential benefits of a legal, regulated market,” the report notes.

The study notes that there is significant black market demand for cannabis in the UK, and that prohibition of English cannabis allows “criminals to control the market and reap the financial rewards while society bears all the risks and costs associated with cannabis use.” Black market cannabis is untested for potency or potentially harmful additives. The report also decries the “skunk” market, skunk being high-THC cannabis sold on the street.

“Arguably ’skunk’ and its market dominance is a product of prohibition itself, as unregulated producers and dealers focus on producing the highest strength varieties of cannabis which offer the greatest profits,” the report states. As we know all too well, British black market suppliers aren’t too scrupulous about what they’use to amplify the effects of the products they sell.

If all of that wasn’t convincing enough, the report also reminds us that victims of human trafficking often grow illegal cannabis, and suggests that the “by-product of prohibition gives criminal gangs control of the market and the incentives to enslave children to produce cannabis.”

Considering this, support to end British cannabis prohibition seems to be growing. The Green Party, which has significant political representation in the UK, recently proposed full legalization. Polling numbers are nearing the tipping point as well. In 2016, 47% of participants in a survey conducted by The Independent said they supported selling cannabis in licensed shops. Only 39% opposed it, and 14% were on the fence. If public opinion in the US is any indicator, those statistics have shifted since.

Will we see legalized cannabis in the UK anytime soon? It’s anyone’s guess, but arguments in favour are indeed beginning to add up.

Get 20% off premium weed and discover the latest products, news, and deals in cannabis.
June 09, 2018 — Last Updated January 09, 2020
Written by Tobias Coughlin-Bogue