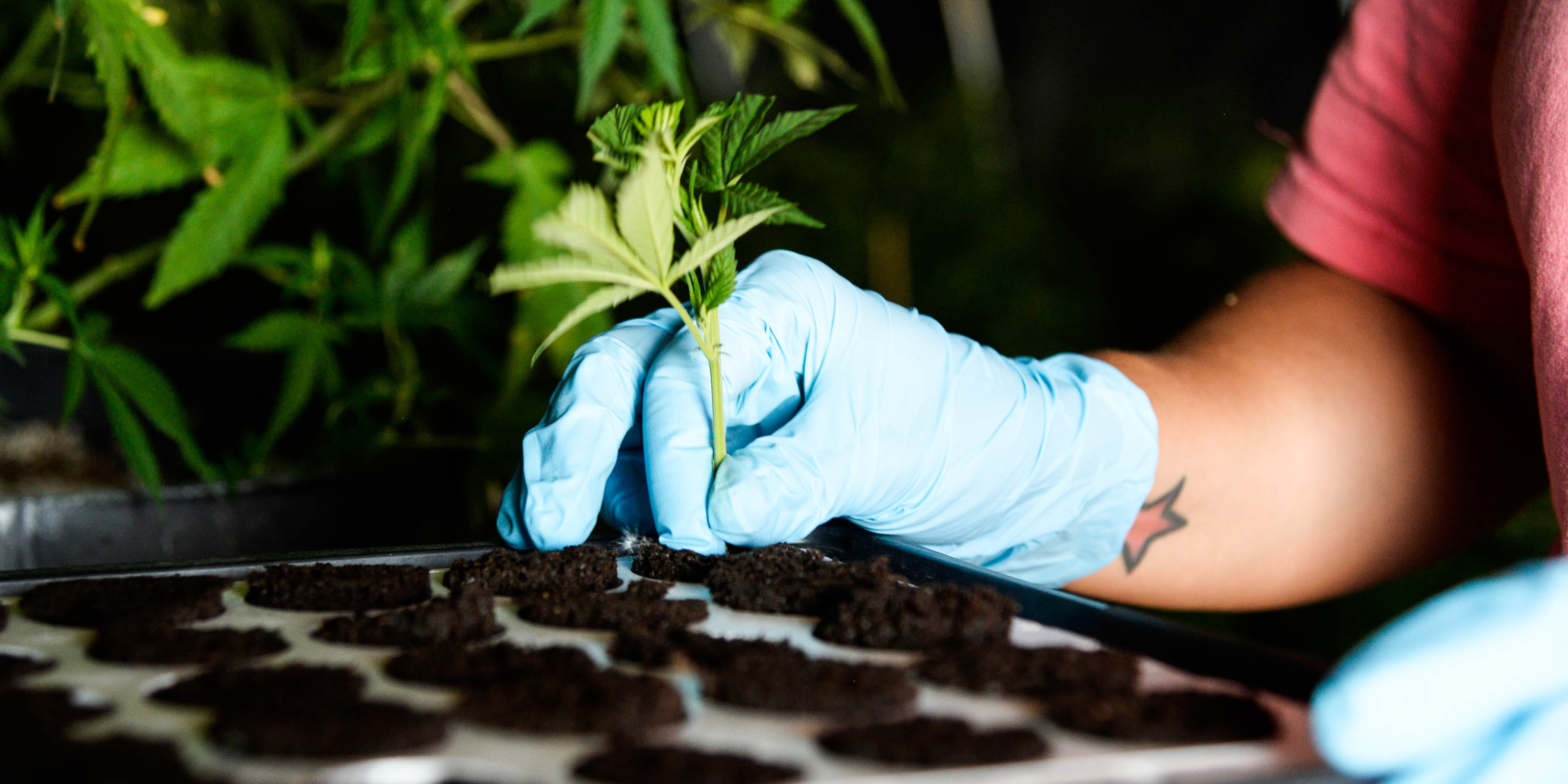 Dawn Turbyfill plants a clone into a tray Tuesday, June 9, 2015 at CBDrx in Pueblo, Colorado. CBDrx is a grower that is setting up one of the largest fields with over 100 acres being used to produced hemp for CBD and other cannabinoids oils and products. (Photo By Brent Lewis/The Denver Post via Getty Images)

In many states, hemp-derived CBD oil is available while anything made from cannabis is not. California has taken a different approach.

In an attempt to clarify the confusing regulations around CBD, the California Department of Public Health published a Q&A memo to explain its stance. It includes the confirmation that all hemp-derived CBD is banned from being produced or sold within the state because it is illegal, according to the FDA.

That message came as a surprise to California’s legal cannabis industry, as many retailers stock hemp-derived CBD products on their shelves.

“Until the FDA rules that industrial, hemp-derived CBD oil and CBD products can be used as a food or California makes a determination that they are safe to use for human and animal consumption, CBD products are not an approved food, food ingredient, food additive or dietary supplement,” the memo states.

As the Department of Public Health lays out, the state of California follows federal regulations when it comes to industrial hemp. As a result, California business owners are left hanging in a legal grey area that has government lawyers and private attorneys at odds.

“Hemp is a made up word,” DEA spokesperson Rusty Payne tells VICE. “For it to be controlled, it has to fall within the definition of marijuana, not just test positive for THC. When it comes to CBD, these products are coming from the plant, which is controlled, which is illegal.”

What Payne means is that the Controlled Substances Act makes every part of the cannabis plant – of which hemp is a variety – illegal, except for mature stalk and seeds incapable of germination. Those excluded parts of the plant are considered, by the government, to be unable to produce any banned substances. Any substance made from the rest of the plant is deemed illegal.

“CBD on its own is not considered illegal,” Michael S. Chernis of Chernis Law Group tells Herb. “The DEA just makes the presumption that because you can’t get CBD from the exempt portions of the plant, that whatever your source is must be illegal.”

However, according to the 2014 Farm Bill, industrial hemp is an exception to this rule. The Agricultural Act of 2014 legalized the growing of industrial hemp so long as it was for research purposes and as part of a state-regulated pilot program – which nearly every state has now implemented.

On one side, the federal government insists that CBD derived from hemp remains illegal; on the other, farmers, manufacturers, and retailers of CBD products have used the 2014 law as grounds to claim that their businesses are legal.

Today, CBD can be found everywhere from your local dispensary to Walmart, and ships between states under the assumption that it’s legal.

But for California, what seems like a new ban has further complicated the issue, especially since CBD is a non-psychoactive component of cannabis and the feds have normally gone after the stuff that gets you high.

“The problem with industrial hemp-derived CBD in California is that California hasn’t created a regulated process for cultivation and extraction,” says Chernis. “The source of the material is what drives the legality.”

In California, CBD products are not banned, but according to the Department of Public health, CBD derived from industrial hemp is.

According to the memo, the confusion seems to be because marijuana products are tested and regulated by the Bureau of Cannabis Control (BCC) – the authority that oversees all retail cannabis in the state – while industrial hemp falls under the Department of Agriculture.

The only acceptable uses for industrial hemp under California’s pilot program are for research purposes and not for the manufacturing of edible products. So while the CBD in both plants is identical, a dispensary is only allowed to make CBD oil from what would be considered medicinal or recreational marijuana because it goes through the proper legal channels.

“Where the tangle is now, is that we have two different regulatory bodies,” says Simone Cimiluca-Radzins, CEO of Kalogia – a consulting firm for cannabis businesses. She believes the issues could be resolved if the state chose to regulate industrial hemp the way it regulates recreational cannabis. In the meantime, her clients fear that they may be forced to pull their product off the shelves.

As far as the rest of CBD products go, according to Chernis, if a cannabis product contains more than 0.3 percent THC, even if you only extract CBD from it, it still falls under the BCC regulations which govern the legal market in California, and that would be exempt from the memo.

Of course, the entire process could be made simpler if regulators recognized that what we’re talking about is the same molecule of nearly identical plants.

Despite the Health Department’s clarification, members of the industry and their legal representatives still seem to be confused. It’s a problem that might have to wait for Senator Mitch McConnell’s (R-KY) Hemp Farming Act to finally legalize a plant which, for much of America’s history, had been used to make rope.

In the meantime, according to a report from Hemp Industry Daily, San Francisco Attorney, Patrick Goggin, believes it may not be time to panic. “Everybody ought to take a breath,” Goggin says, pointing out that the feds aren’t clear enough on the rules to act definitively.

In fact, it already has in other areas. Chernis is now the middle of a class action lawsuit against the federal government to put a stop to random seizures of imported CBD by Customs and Border Protection officials.

“They’ll seize and destroy the material,” Chernis says, “and they’ll do this based on a misunderstanding of the law.” He adds, “There have actually been instances where we have been able to jump in and prevent the destruction of the [CBD] by explaining the legality of [it].”

The FDA just approved the first CBD-based medicine, a spray treatment for epilepsy called Epidiolex. The Drug Enforcement Administration now has less than 90 days to determine whether they’re going to reschedule Epidiolex or CBD more broadly.