Now Reading:legalization | California cops give out cannabis DUIs even though no one understands high driving 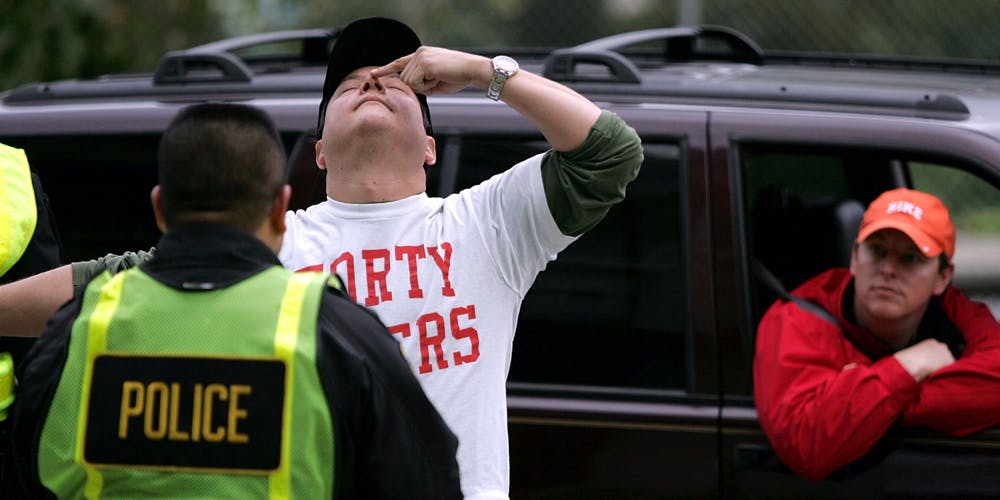 A man is given a sobriety test at a sobriety checkpoint December 26, 2004 in San Francisco, California. The California Highway Patrol reported a total of 1,481 driving under the influence arrests since the December 17 the start of the AVOID regional campaign against drunken driving. (Photo by Justin Sullivan/Getty Images)

They do field sobriety tests based on alcohol.

In recent months, “Drive High, Get A DUI” signs have popped up along California highways. They were placed there before the opening of California’s recreational marijuana market on Jan. 1 as a warning to drivers: alcohol isn’t the only substance that can land you a massive fine and potentially even jail time. But the reality is a bit fuzzier, according to Nick Morrow, a court-certified Expert Witness and former Drug Recognition Expert (DRE). Not because Californians are unlikely to drive high or because cops aren’t likely to pull them over, but because no one’s really figured out what it means to be too high to drive.

Morrow has seen over 400 cannabis DUI cases for the public defender’s office in L.A. and Orange County, and many of them, he says, either result in reduced penalties or get dismissed. But in the meantime, drivers are inconvenienced because they have to do sobriety tests for officers on the roadside that are based on alcohol; go in to do blood tests for THC which are based on questionable science; and, in the worst cases, are put in jail. Then, of course, they have to appear in court to fight the charge.

“A lot of times the police pulls you over to give you a ticket,” Morrow told Herb. “You roll down your window and they smell burnt cannabis or based on a single observation— maybe bloodshot, watery eyes—they get you out of the car.”

According to a 2016 study published in the Journal of Applied Toxicology, most marijuana DUIs are currently the result of minor traffic violations, like failing to signal or other signs that could easily be mistaken for distracted driving. As an expert witness, Morrow routinely takes the basic field sobriety test training to familiarize himself with the standards. His experiences have been far from reassuring.

“They’re a good tool to help the officer make a decision of whether or not to arrest this person,” he says, but the current tests alone are not enough to tell whether someone is safe behind the wheel.

It’s clear that police need a better system for marijuana DUIs. That’s where someone like Chris Halsor comes in. Halsor is a Colorado attorney and founder of Understanding Legal Marijuana, one of the only private companies in America which conducts training courses specifically designed to help police recognize when a driver is too high. They’re based on Wet Labs, standard training for police departments across the country where volunteers drink alcohol and then go through sobriety tests so police can get a sense of how a drunk person behaves.

Green Labs, similar to Wet Labs, offer police real-world simulations of roadside stops with volunteers who have been administered marijuana by the instructors. Halsor has held 30 of these Green Labs in Colorado since 2015 and has just begun training California cops in order to prepare them for a world where simply detecting the smell of marijuana in a vehicle isn’t enough. But, as of now, Sgt. Glenn Glaser, a Drug Recognition Expert with the California Highway Patrol, says his department can’t train officers with actual marijuana, a significant disadvantage when learning to recognize high drivers.

“From a law enforcement perspective, we are unable to participate in a Green Lab,” says Sgt. Glaser, “it’s still a federal crime for me to furnish or possess a Schedule I substance.”

Still, Glaser insists that with recreational marijuana now legal in California that the bar has been raised significantly for marijuana DUIs. “Just because somebody may have the presence of a drug in their system doesn’t necessarily mean that they’re physically or cognitively impaired,” says Glaser. “Officers aren’t arresting just for the mere presence of a drug.”

Under the new legal regulations, the California Highway Patrol will be given $15 million over the next five years to come up with a better field sobriety test for marijuana. This stipend was built into the legislation that legalized recreational marijuana in the state. But for now, the old methods— sobriety tests designed for alcohol DUIs and shaky science about THC levels—are all they have access to. This causes a problem in the courts too as, in the absence of reliable science, like the breathalyzer used for alcohol DUIs, juries rely heavily on police assessments.

The ‘gold standard’ in California for determining cannabis intoxication is a blood test measuring levels of delta-9 THC, the main intoxicating component of cannabis, which has a shorter shelf life than its longer lasting counterpart known as 11-nor-9-carboxy-THC. (Carboxy THC, tested for in Oregon and Maine, is detectable up to 30 days after someone has smoked, which is not at all a good indicator of real-time intoxication.)

Yet, even for the gold standard blood tests for marijuana DUIs, a Report to Congress from The National Highway Traffic Safety Administration found that timing is an issue. The report says, “it is very unlikely a police officer would encounter a suspect and obtain a sample of blood or oral fluid within a short enough time for high THC levels to be detected.”

Additionally, even if high THC levels are detected, that doesn’t necessarily say anything about how “high” a person is. Researchers have tried to determine a set level of cannabis impairment for everyone, but have repeatedly found that it depends on an individual’s biology and tolerance. It’s for that reason that California hasn’t even set a level, while other states insist on the 5 nanogram bar, which many now believe to be arbitrary.

Those caught in the uncertainty of the current system could end up spending tens of thousands of dollars defending themselves against DUIs or relying on the public defender’s office. Then, there are other fees like rising insurance costs to consider.

According to the Department of Motor Vehicles, DUIs can cost an individual over $45,000 when all fines and additional fees are added up. For some who have gotten cannabis DUIS already, that burden has been way too big bear and they’ve taken plea bargains just so they don’t have to go through a months-long ordeal.

“I don’t want to see impaired people on the highway,” says Morrow. “What I want to see is a good solid approach to make sure people are prosecuted fairly using the available science.”