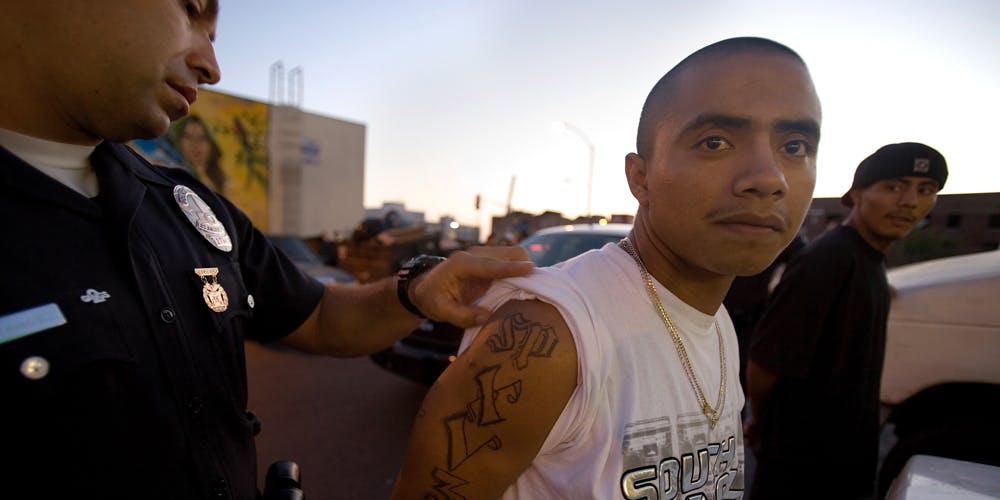 LOS ANGELES – AUGUST 4: (US NEWS AND WORLD REPORT AND NEWSWEEK OUT) With three 18th Street gang members detained, a Los Angeles gang police officer checks a tattoo of a member on August 4, 2006 in the Rampart area in Los Angeles, California. The three hispanic gang members were taken into custody in violation of a city injunction prohibiting known gang members from congregating in specific public areas. LA’s Rampart neighborhood is known for it’s violent hispanic street gangs and a flourishing drug trade. The 18th Street gang is one of over 25 established gangs that operate in the Rampart-Wilshire neighborhoods. Los Angeles’s violent crime rates, traditionally one of the highest in California, have recently fallen as figures show a shift by criminals and gangs to outlying counties where real estate prices are more affordable. (Photo by Robert Nickelserg/Getty Images)

Recreational sales are set to begin in the state on January 1.

High taxes on legal cannabis in California could drive many consumers away from legal pot shops and back to the black market, according to a report published last month. Medical marijuana has been legal in the Golden State since 1996, but the recreational cannabis market is just now ramping up, with sales scheduled to begin on New Year’s Day.

Credit agency Fitch Ratings estimates state and local taxes on California weed could be as high as 45 percent, reports The Washington Post. That would mean California would trail behind only Washington state in over-taxing cannabis. Washington, which has served mostly as a bad example to the rest of the states which have legalized, not only has the highest effective taxation rate, at 50 percent, but it is also the only “legal” state which prohibits home cultivation by adults.

“The existing black market for cannabis may prove a formidable competitor to legal markets if new taxes lead to higher prices than available from illicit sources,” according to the Fitch Ratings report.

One factor contributing to potential over-taxation in California is that recreational pot will be taxed at both the state and local level.

The state will levy a 15 percent excise tax, as well as cultivation taxes. Cities and towns will also impose sales taxes from 7.25 percent to 9.25 percent, on top of the state excise tax. And a business tax—which could be anywhere from 1 to 20 percent—on gross receipts, or from $1 to $50 per square foot of cannabis plants, will be charged. Farmers will be taxed $9.25 per ounce for flower, and $2.75 per ounce for leaves, reports CNN Money.

California voters have already approved business taxes on recreational cannabis in more than 60 cities and counties, according to the Fitch Ratings report.

Such high tax rates, of course, could make legal weed more expensive than what’s already available on the black market. California, as America’s center of cannabis growing, has long provided black market weed to the rest of the nation.

“California’s black markets for cannabis were well established long before its voters legalized cannabis in November 2016 and are expected to dominate post-legalization production,” according to the report.

According to the report, Colorado, Oregon, and Washington all reduced marijuana tax rates after legalization was implemented in order to lessen the allure of the black market.

“The only state that we know of that has undertaken a radical tax transformation is Washington,” said John Kagia, an analyst for cannabis data firm New Frontier Data. Washington still has the highest cannabis sales tax in the country, Kagia added.

In California, each municipality has to decide if it wants to allow cannabis businesses. If the answer is yes, they must then decide on regulations and taxation. This, of course, will almost inevitably lead to a situation where cities charge wildly different tax rates on cannabis purchases.

Some cities welcome the new industry. Adelanto, about 85 miles northeast of Los Angeles, is using cannabis cultivation as an economic development strategy. Monterey County, in northern California, is encouraging marijuana growers to use its vacant greenhouses.

But other cities—particularly in the more conservative interior of the state, away from the coast—have banned marijuana businesses entirely.

But according to the report, legalization could make the worst fears of many small farmers come true: It could create industrialized, large-scale cannabis farms that undercut the mom-and-pop operations that have characterized the region since at least the early 1970s.

Since neither the state, nor many municipalities, have released their regulations yet, businesses continue to be in limbo just weeks before the start of legal sales. Some cities, including San Francisco and Los Angeles, have said they won’t have their regulations ready for the start of sales on January 1, 2018. Here’s a comprehensive guide on the places that will.

Even without the taxes, black market marijuana cultivators in California face formidable obstacles in “going legal.”

Registering with the state and becoming compliant will cost about $100,000, according to Van Bustic of Berkeley’s College of Natural Resources. Bustic, who specializes in the environmental impact of cannabis cultivation, said that many Humboldt farmers are unlikely to bear that cost if they can continue to operate away from the prying eyes of the tax collector.