Early this morning, Congress voted to renew the Rohrabacher-Blumenauer amendment. 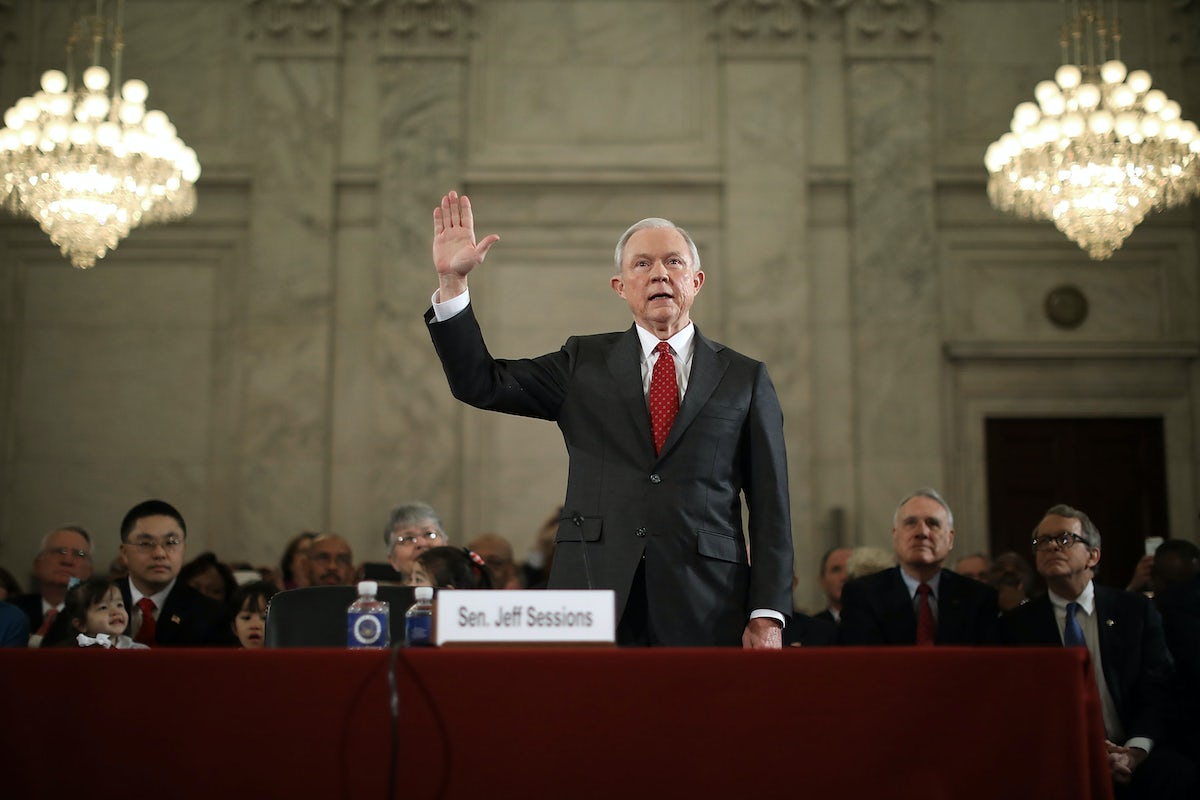 WASHINGTON, DC – JANUARY 10: Sen. Jeff Sessions (R-AL) is sworn in before the Senate Judiciary Committee during his confirmation hearing to be the U.S. attorney general January 10, 2017 in Washington, DC. Sessions was one of the first members of Congress to endorse and support President-elect Donald Trump, who nominated him for Attorney General. (Photo by Chip Somodevilla/Getty Images)

Congress voted today to renew the Rohrabacher-Blumenauer provisions which protects states with legal medical marijuana from prosecution by the Department of Justice (DOJ) until March 23rd as part of a continuing resolution according to the office of Congressman Earl Blumenauer.

The provisions are part of an amendment to the federal budget which is passed every year to fund government departments like the DOJ. The amendment prevents the DOJ from spending any of the money it receives from the budget to go businesses and individuals in states with legal medical marijuana.

The amendment’s approval has been up in the air for months now as the government struggled to agree on a budget. Without an agreement on how to spend money and where the government cannot operate and is forced to shut down.

The amendment was allowed to expire temporarily for the first time on January 20, 2018, as a result of a government shutdown, but was extended on January 23rd when the government passed a temporary budget.

Rohrabacher-Blumenauer, which is named for its sponsors U.S. Rep. Dana Rohrabacher (R-CA) and Earl Blumenauer (D-OR), is a separate protection from the Cole Memo, which Attorney General Jeff Sessions scrapped earlier this year. It prevents law enforcement agencies like the DEA from prosecuting medical marijuana in legal states whereas the Cole Memo extended that protection to recreational marijuana.

In the past, the DOJ has tried to ignore the amendment by arguing that it applies only to government officials in the listed states and not to private citizens and businesses. In its selective interpretation of the amendment, the DOJ actually contradicted itself, having originally opposed the amendment because it believed that it could apply more broadly to recreational users.

In 2016 the Ninth Circuit Court, which covers the bulk of legal marijuana states on the western side of the country, put that confusion to rest by ruling that the protection extends to all businesses and consumers operating within the law in their own state.

If the DOJ decided to prosecute medical marijuana during a government shutdown, which it has never done, the decision made by the Ninth Circuit Court would protect Americans prosecuted for the use or sale of medical marijuana.

However, if a future budget is ever passed without the amendment included, the DOJ would no longer be restricted from spending money to prosecute medical marijuana across the country. Which means it is important that the amendment is approved each year until marijuana is removed from the highest restrictive listing, Schedule I, under federal law.

Since it first passed in 2014, support for Rohrabacher-Blumenauer has increased among members of Congress to the point that it’s inclusion in future budgets has become the standard.

But opponents of the amendment still remain. Last Fall, Rep. Pete Sessions (R-TX) attempted to block a number of marijuana-related provisions including Rohrabacher-Blumenauer.

The full text of the amendment, reads:

“None of the funds made available in this Act to the Department of Justice may be used, with respect to the States of Alabama, Alaska, Arizona, California, Colorado, Connecticut, Delaware, District of Columbia, Florida, Hawaii, Illinois, Iowa, Kentucky, Maine, Maryland, Massachusetts, Michigan, Minnesota, Mississippi, Missouri, Montana, Nevada, New Hampshire, New Jersey, New Mexico, Oregon, Rhode Island, South Carolina, Tennessee, Utah, Vermont, Washington, and Wisconsin, to prevent such States from implementing their own State laws that authorize the use, distribution, possession, or cultivation of medical marijuana.”

CORRECTION: A previous version of this article stated that the provisions were extended for 2 years. The extension is until March 23rd, 2018.