Trump’s Big U-Turn On Cannabis And US Drug Policy

Donald Trump used to be against the War on Drugs. Now that he is running for President, his views have changed. He is still reckless, daring, and loud. Do those qualities make him a good candidate? 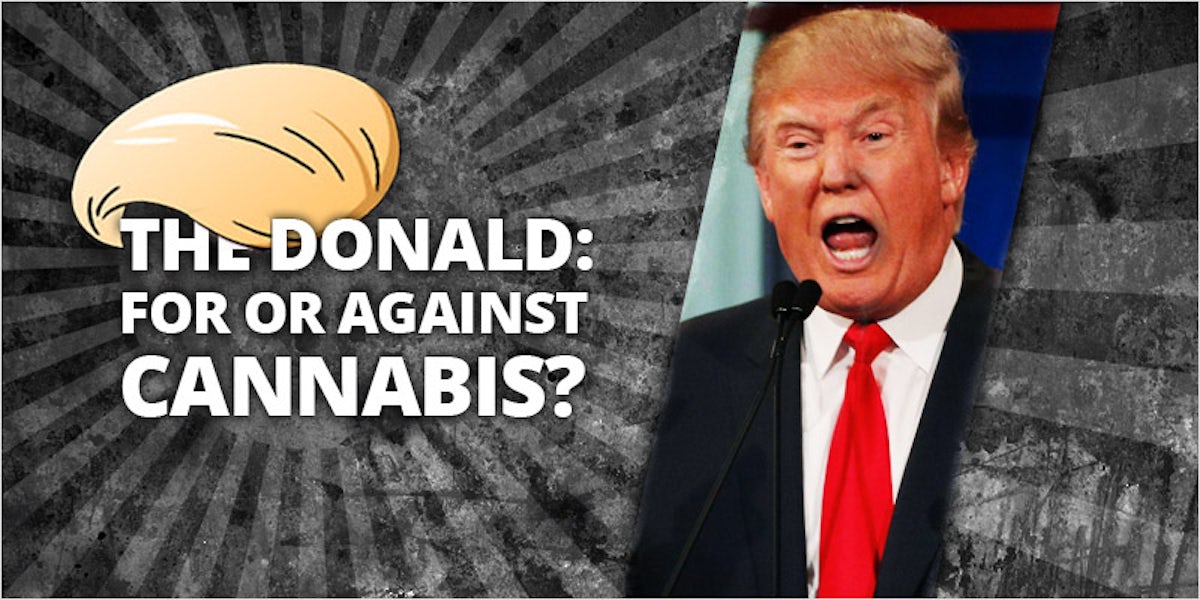 Donald Trump is probably one of the most controversial candidates for President of The United States that has ever thrown his hat into the ring. From his brazen attitude, his stint as a reality show TV star, and his domination of the business world, he has been around the full spectrum.

While his businesses have filed for strategic bankruptcy four times, he has bounced back and come out on top every time. Perhaps it is his fluency in legal jargon and business deals that make him well suited, but over the years, his constant changes on position have left people wondering.

Trump against the war on drugs 1990

While his stance on immigrants and real estate have been fairly constant, Donald Trump’s stance on drugs has been through more position changes than an adult film star. Here’s just a few of his utterances on the subject over the years.

Back in the 90’s, Trump called to legalize all drugs, arguing that was the only way to win the War on Drugs. He said lawmakers who “don’t have any guts” and law enforcement that is a “joke” were to blame for the country’s drug problem. He suggested using the tax money from legalized drugs to fund drug education for the public.

“We’re losing badly the War on Drugs. You have to legalize drugs to win that war. You have to take the profit away from these drug czars,” Trump in 1990.

“What I’d like to do maybe by bringing it up is cause enough controversy that you get into a dialogue on the issue of drugs so people will start to realize that this [legalizing drugs] is the only answer; there is no other answer.”

Now that he is running for Presidency, it seems that Donald Trump is adjusting his rhetoric to get the votes. He has shifted the blame for the failed War on Drugs from law enforcement and politicians to illegal immigrants.

“In terms of marijuana and legalization, I think that should be a state issue, state-by-state. Marijuana is such a big thing. I think medical should. And then I really believe we should leave it up to the states. And of course you have Colorado. There’s a question as to how it’s all working out there, you know? That’s not going exactly trouble-free“

“I say it’s bad,” he said at the Conservative Political Action Conference in June 2015, in response to a question about Colorado’s legal weed. “Medical marijuana is another thing, but I think [recreational marijuana] it’s bad. And I feel strongly about that.” But what about states’ rights? “If they vote for it, they vote for it. But they’ve got a lot of problems going on right now, in Colorado. Some big problems. But I think medical marijuana, 100 percent.”

“I will be the greatest jobs president that God ever created.”

Some of his ideas, like a wall along the entire southern border of the United States, seem extreme, and he has certainly made it clear that he isn’t a suave politician, but is he really as brash as he sounds, or is he using the same tactics that made him a success in business to win in politics?

Mind you, those tactics caused his businesses to tank four times, but he came out without a scratch. If the US becomes his business, will we suffer the same fate? If he does achieve Office, would he still oppose legalization, or would he go back to his former statements of freedom and tax use to fund public education? The truth is no one knows. He could simply be toying with us.

Do you think Trump has what it takes to be the President? Is he a more honest politician, or is he becoming as bought as the rest of political crowd? Let us know on our social media page or in the comments section below.

Enjoy the latest and greatest from Herb, enter your email below to get exciting cannabis updates delivered to your inbox.
February 17, 2016 — Last Updated December 11, 2019
Written by Christopher Teague