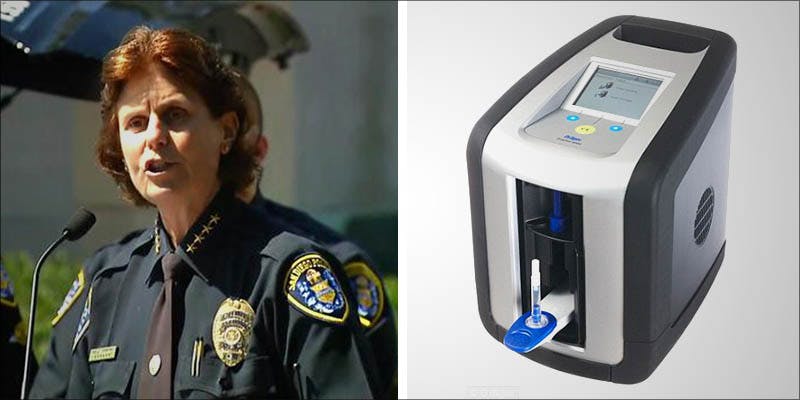 With a name that sounds like a secret weapon from a B movie, the San Diego Police Department have unveiled the Drager 5000 to catch stoned drivers.

With a name that sounds like a secret weapon from a B movie, the San Diego Police Department have unveiled the Drager 5000, a tool that might be able to detect and help prosecute stoned drivers.

Watch out, San Diego, the Drager 500 will detect stoned drivers

Said to have been concerned about a rise in impaired driving since the legalization of cannabis, the San Diego PD has chosen to employ a new tool to help officers detect drugged driving, which was debuted on the evening of Saint Patrick’s Day.

The Drager 5000, which is the first of its kind to be used in San Diego, is being used as a roadside screening device.

During a roadside stop, police will swab saliva from the mouth of a driver that is suspected to be under the influence of any drug (both illegal and prescribed), but only after the driver has been screened by a Drug Recognition Expert, which will be tested by the device.

Before you panic, it seems the evidence might not be able to be used against you. A criminal defense attorney, Vik Monder, has stated that the Drager 500 test will not hold up in court, as it only screens for the presence of drugs and not when the drugs were used.

He continues that, if that is the case, the driver should not be subjected to a blood test, either, as such a test is not designed to measure your level of impairment.

It might tell you that there are drugs present, but not if you’re under the influence, at the time of driving.

But an officer of the SDPD countered, saying that the Drager 5000 is,

While that will probably be argued in court, in the meantime, you only need to know that the Drager 5000 will only be used after a Drug Recognition Expert has evaluated the driver and suspects the person is high.

Be careful out there.