During a closed-door meeting with Wall Street Bankers (her financial supporters) Clinton made her stance on cannabis legalization clear. 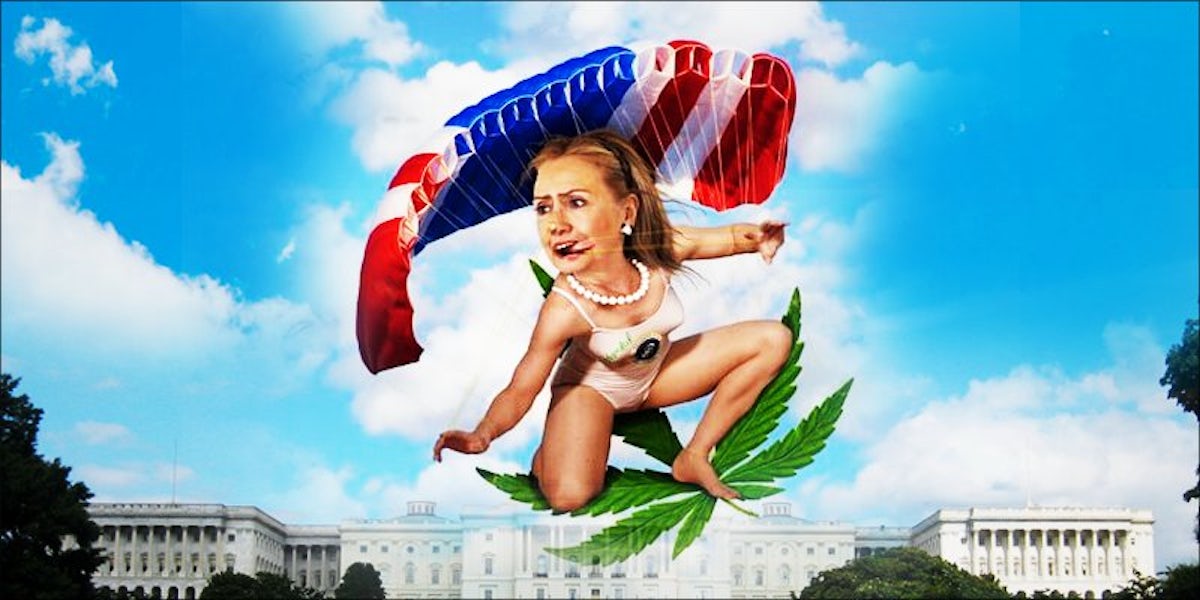 In what seems like a never-ending race to the White House, both candidates have flopped and floundered on various issues. One particular issue the nominees continue to switch back and forth on is their views on legalizing cannabis. While Trump has made it clear he wants more research done and won’t condone legalization without concrete proof of its properties, Clinton has gone from saying she supports legalization to denouncing the plant altogether. Now, thanks to some of those leaked emails of hers, we’re given the opportunity to see what she’s said to bankers and big businesses about the issue behind closed doors.

While campaigning for the Presidential nomination, Hillary Clinton has been accused of a tremendous amount of varying ideas and views.

While this might be true when it comes to her stance on health care reform and immigration, one area that has gained little attention is her lack of clarification on cannabis legalization.

She often says she’ll allow states to make their own decisions, and has even admitted that cannabis needs to be rescheduled and removed from the list of harsh Schedule 1 drugs, she tends to blanket those statements by saying things like, “But we need more research” or, “We’ll have to wait and see.”

With her deleted emails being at the forefront of every voters’ questioning, we were all excited to learn some of the 33,000 messages had been recovered.

While Clinton continues to assure the public that the emails contained no top secret or important information, and pertained “mostly” to her daughter’s wedding plans and her own personal activities, after sifting through the leaked correspondence we’re seeing quite a different story.

In bed with the bankers?

During a closed-door meeting with Wall Street and Big Banking executives, who have made significant monetary donations to her campaign, Clinton made her stance on cannabis legalization clear.

While speaking to the financial officials, the presidential hopeful explained the importance of having one public stance and one private stance, so the varying influence of voters can be accurately matched.

To align herself with the beliefs and interests of the top-tier elite in front of her, while being questioned by Ursula Burns, Xerox’s chairman and CEO, Clinton answered questions in the best way she could, she flipped her responses from those that she gives the general population.

Even if you could make money on a short, you can’t answer short.

You can answer short, but you got to be careful about letting anybody else know that. They will bet against you. So legalization of pot?

Short, in all senses of the word.

By explaining her true stance on the situation, Clinton reveals just exactly where her loyalties lie, and they aren’t with the average American.

Instead, she is protecting the interests of pharmaceutical companies and other Wall Street tycoons, who donate millions of dollars every year to fight cannabis legalization and kill bills that would advance medical research and funding.

These high-powered companies have Clinton in their pocket, just as they do many other politicians, and the general public is left out in the cold, fondly missing the beloved Bernie Sanders.