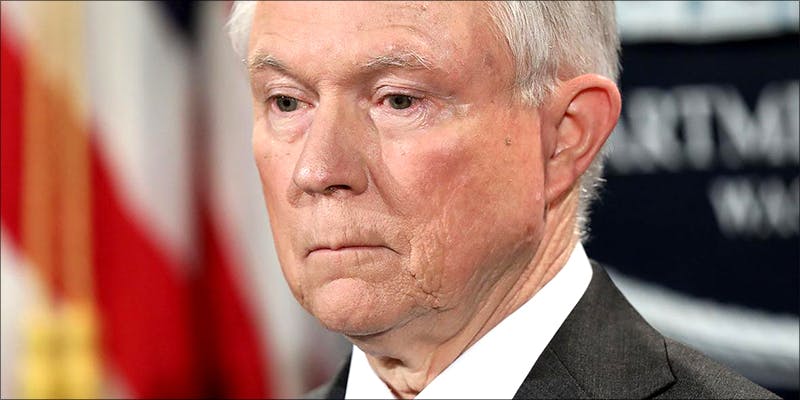 Jeff Sessions appears to be a man on a mission when it comes to increasing federal drug enforcement. So get ready people, this just got real.

Perhaps he’s trying to distract us all from the rumors of private meetings with the Russian government, (hence the egregious dodging of questions at yesterday’s Senate committee hearings), but Attorney General Jeff Sessions appears to be a man on a mission when it comes to increasing federal drug enforcement. Citing a “historic drug epidemic,” Sessions recently submitted a letter asking Congress to eliminate federal protections of medical marijuana states, including the Rohrabacher-Farr amendment that was just renewed in April.

Rohrabacher-Farr prohibits the allocation of federal money for interference in state marijuana laws. Sessions argued that the amendment restricts the U.S. Department of Justice inappropriately enforcing the Controlled Substance Act.

In a letter submitted to Congress on May 1, Sessions wrote

I believe it would be unwise for Congress to restrict the discretion of the Department to fund particular prosecutions, particularly in the midst of an historic drug epidemic and potentially long-term uptick in violent crime.

The Department must be in a position to use all laws available to combat the transnational drug organizations and dangerous drug traffickers who threaten American lives.

Let’s break this down

The ‘historic drug epidemic’ Sessions refers to is the opioid crisis that continues to reach appalling numbers within the U.S. and abroad. Yet, the concerned AG seems to have missed the memo that medical marijuana states have seen significant reductions in opioid deaths and overdoses as referenced by the National Institute of Drug Abuse.

It is also worth noting that Sessions made no mention of how he would deal specifically with the opioid or pharmaceutical markets.

Furthermore, removing the Rohrabacher-Farr amendment would do nothing to taper off drug trafficking since the provision deals solely with federal interference in legal medical marijuana states. If anything, blocking patient access to useful medicine would most likely drive more illegal activity, not less.

His argument is that drug traffickers are using medical marijuana as a ruse to run illegal shipping operations to non-legal states. But if we follow this argument, we also have to apply this to entities like Wall Street where some hedge fund bankers are legit, and some abuse the system.

There are going to be abuses in every system, but do we eliminate those entities completely, or do we create effective laws to rid those systems of abuses?

Marijuana has a potential for abuse, no currently accepted medical use treatment in the United States, and a lack of accepted safety for use under medical supervision.

Of course, the DEA is super impartial on this issue, notwithstanding the $3.2 billion in cash and assets their department has taken in legal seizures from individuals not charged with any crimes since 2007.

And quite naturally, there is in fact “a lack of accepted safety for use under medical supervision” when a safe plant is federally outlawed, subjected to limited scientific research, and isn’t recognized by the FDA who would be able to determine those acceptable safety levels.

It’s becoming clear that in spite of the facts, Jeff Sessions isn’t going to let up on cannabis. So get ready people, this just got real.