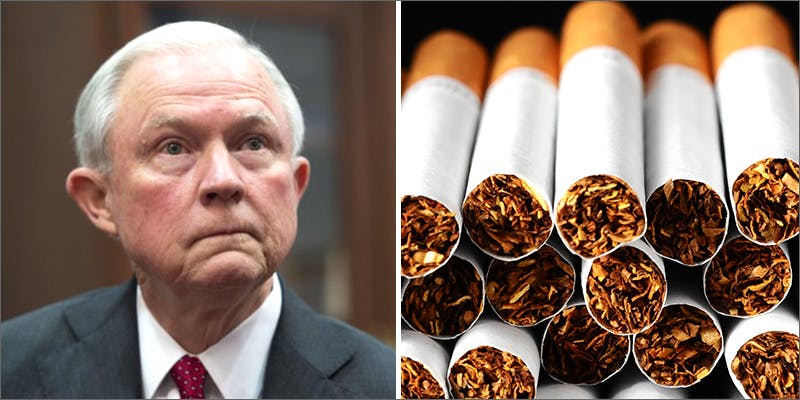 Big Tobacco wants cannabis out of their way. And, as discovered documents reveal, Jeff Sessions has been in their pocket for a long time.

It’s common knowledge that Big Tobacco wants cannabis out of their way. But, as discovered documents reveal, Jeff Sessions has been in their pocket as a “tool” for a long time.

Big tobacco forced to fess up

Big Tobacco lied about the addictive nature of tobacco and the clear health dangers for decades. In the 1998’s, however, after states banded together in one giant lawsuit, they finally admitted the truth.

In addition to the $245 billion dollar settlement, Big Tobacco released thousands of private documents and files exposing how deeply entrenched in regulation and legislation they actually reached.

And what did those documents have to show for Jeff Sessions? He is a paid puppet of propaganda. First elected to the Senate in 1997, his campaign received a sizeable donation from R.J. Reynolds, makers of Camel cigarettes. In fact, Big Tobacco gave so much to Sessions, his campaign had to issue a partial refund. It seems tobacco gave more than the legal maximum to a political candidate.

Since then, he has continued to back their interests in office. His first order of business consisted of a failed attempt to block the impending lawsuit against the tobacco industry.

According to Truth Tobacco Industry Documents, at a dinner with Bill Orzechowski, Chief Economist for the Tobacco Institute, he said that the lawsuit was “extortion,”

If we let them get by with this extortion of the tobacco industry, then they’ll start shaking down other industries, one after the other.

In an effort to stem the tide of state lawsuits, Sessions introduced a pro-tobacco industry amendment. The amendment failed, but it would have limited the amount lawyers going after Big Tobacco could make on their cases, in order to dissuade more lawsuits.

Jeff Sessions is a tool… for the 1%

His support remains unwavering. After the turn of the century, Congress finally realized that tobacco would have to fall under the regulation of the FDA. Sessions rallied against bills that would help this happen, as recently as 2004.

In 2009, realizing the inevitable loss, even Big Tobacco turned around and supported the FDA regulation before Sessions changed his stance. The results of that legislation eliminated advertising targeted to youth, vending machines, brand sponsorships for sports and other events, and giveaway promotional items.

What more can a man do for the companies lining his pockets and helping rocket his political career into the stars? Well, as Big Tobacco has admitted that cannabis is a major enemy to profits, so why not attack it next? If you can’t join them, beat them.

After all, legal cannabis would not only impact his tobacco sponsors but the for-profit prisons and pharmaceutical giants who contributed to him over the years as well.

In the end, it isn’t that Jeff Sessions really wants to avoid “marijuana being sold at every corner grocery store” because it is dangerous. Tobacco kills thousands every year and he is fine with that.

Jeff Sessions simply opposes cannabis because he is paid to. With the pro-capitalism stance of the new White House, perhaps it would be easier to cut him a check that replaces him. From his track record, he seems like a great investment.