If your lawmaker isn’t on this list, they are not supporting cannabis legalization by co-sponsoring the Ending Federal Marijuana Prohibition Act of 2017 and the REFER Act of 2018. 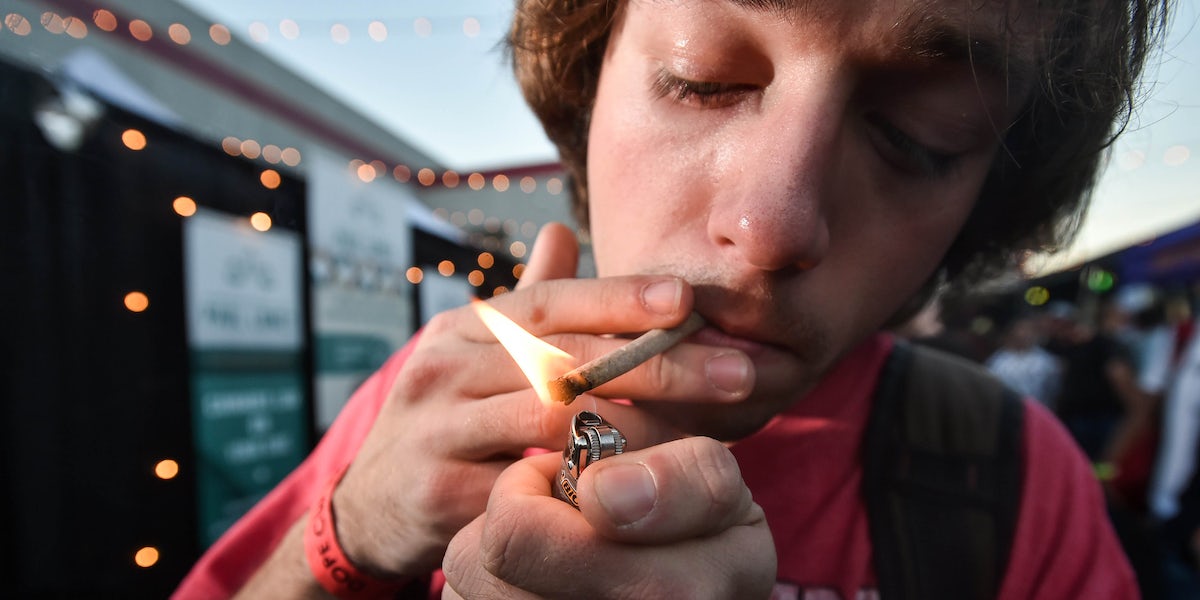 A man lights a joint at the first annual DOPE Cup, a cannabis competition in Portland, Oregon, on October 4, 2015. As of October 1, 2015 a limited amount of recreational marijuana became legal for all adults over the age of 21 to purchase in the state of Oregon thanks to lawmakers supporting cannabis legalization. (Photo JOSH EDELSON/AFP Via Getty Images)

A new report by Date for Progress, a liberal data research organization, finds that the majority of Democratic lawmakers are not adequately representing Democratic voters’ desires by supporting cannabis legalization.

Volunteers from Justice Democrats, a progressive political action committee, analyzed the voting records of every House Democratic on twelve bedrock issues for the political Left, including a $15 minimum wage, free college tuition, and cannabis legalization.

For cannabis legalization, the volunteers looked into whether House Democrats co-sponsored either the REFER Act of 2018 or the Ending Federal Marijuana Prohibition Act of 2017. These two pieces of legislation are central to the mission of both protecting states’ individual rights to determine their own cannabis laws, and to amending the federal government’s Schedule I classification of cannabis under the Controlled Substances Act.

“We also sent out emails to every member of Congress and to their staffers. We also checked their websites.” Sean McElwee, the report’s lead author and founder of Data for Progress, tells Herb. “So if anyone had wanted to indicate their support, they had an opportunity to do so.”

Cannabis reforms reform’s increasingly non-partisan nature makes the lack of Democratic support even more puzzling. According to the report, 61% of Republicans and 76% of Independents under the age of 40 support legalizing cannabis. “In addition,” reads the report, “private polling of deep red districts suggests that even there, legal marijuana garners strong support.”

Despite widespread support for cannabis reform, as of now, the Ending Federal Marijuana Prohibition Act of 2017 only has 33 cosponsors. The REFER Act of 2018 has even lower support, with a mere 10 cosponsors. McElwee compares this to the wide Democratic support for the Equal Access to Abortion Coverage in Health Insurance (EACH Woman) Act of 2017, which received 133 Democratic cosponsors.

When held up side-by-side, it’s apparent just how low Democratic support for marijuana reform actually is.

McElwee believes that marijuana reform is a necessary issue for Democratic lawmakers to get behind if they wish to represent their base and start winning elections—both on the local, state and federal level.

“Even in states like West Virginia, folks like Richard Ojeda see this as a very effective way to win over Trump voters.” Says McElwee. “It’s an amazing political issue for Democrats because it’s something that for one, you don’t have a ton of backlash. Two, it’s an issue in which the base is very united. And three, it’s one of those really key issues where you can play to the Obama-Trump voters, while also standing for racial justice, and also energizing those young voters that you need to win. So it’s a really, really sexy issue.”

Based on cosponsorship for either the REFER Act of 2018, or the Ending Federal Marijuana Prohibition Act of 2017, the following Democratic lawmakers—representing the following states, cities and/or counties—actively support cannabis reform.

If your county, city, or local Democratic representative is not on the following list, they’re likely not representing voters’ desires and supporting cannabis legalization:

Enjoy the latest and greatest from Herb, enter your email below to get exciting cannabis updates delivered to your inbox.
May 19, 2018 — Last Updated
Written by Rob Hoffman