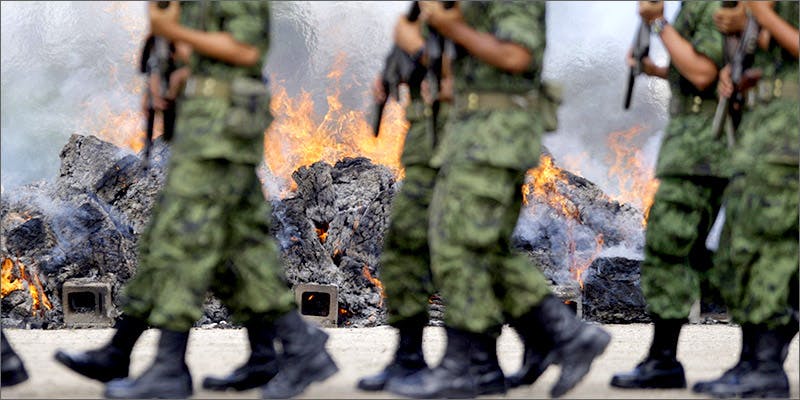 Legalization has brought higher quality, safer, cheaper cannabis into the market, cutting profits out of cartel pockets at the source.

Statistical data from U.S. Border Patrol shows a significant drop in cannabis coming across the border from Mexico to the United States. This drop coincides with several states legalizing cannabis use and cultivation. Legalization has brought higher quality, safer, cheaper cannabis into the market, cutting profits out of cartel pockets at the source. It seems that if you legalize cannabis, cartels will stop growing it. Who would have thought?

The Washington Post reports that confiscation levels for marijuana are at the lowest point in a decade, to only 1.5 million pounds. The peak was in 2009 at over 4 million pounds.

In an interview with Anti-Media, Amir Zendehnam, who hosts the cannabis-oriented show “In the Clear with Amir” on Z420.tv had this to say:

“The economics of the cannabis industry show us that with healthy competition in the market, prices drop, quality rises, violence diminishes, and peaceful transactions increase. As constant new research emerges detailing the plant’s benefits, the negative stigma of using cannabis, both medicinally and recreationally, is diminishing, raising the demand for high quality product.

“Colorado, for example, is experiencing an economic boom that has never been seen in the state. The biggest issue in Colorado today is what to do with the huge amounts of revenue and economic success the state is gaining as a result of legalization. The Colorado model has proven that legalization reduces crime rates, cuts prices, pushes unfavorable competition out of the market, provides cleaner products with heightened transparency, and increases the standard of living for society as a whole.

“The only people hurt by continued societal acceptance and legalization of cannabis are the cartels and their friends, who have flourished for decades as a result of drug prohibition.

“As legalization spreads across the U.S. and the rest of the world like wildfire, I predict the industry will soon become one of the most dominant and beneficial industries humanity has ever seen.”

Only a few years ago, Mexican farmers could earn $60 to $90 per kilo of marijuana, but now that demand has dropped for Mexico’s inferior product, farmers are lucky to get $30 to $40 a kilo. This, in turn, results in more farmers turning to other crops for better money, and reducing the flow across the border even further.

Mexican “dirt weed”, “ditch weed”, or “brick” as it is called, referring to the tight packaging process used to decrease its bulk, is harder to find in legal states, and prices for home-grown cannabis are decreasing.

The War on Drugs

“Since Richard Nixon declared a war on drugs in June 1971, the cost of that “war” had soared to over $1 trillion by 2010. Over $51 billion is spent annually to fight the drug war in the United States, according to Drug Policy Alliance, a nonprofit dedicated to promoting more humane drug policies.”

Instead of digging taxpayers even further in the hole, legal states have saved millions of dollars in police manpower, court fees, incarceration costs, and built up an impressive surplus of tax dollars to spend improving communities. Colorado became the first state to generate more tax revenue from marijuana than alcohol ($70 million) in a single year!

Have you seen any brick weed lately in legal states? Have you noticed the drop in cartel-related crime? What does this mean for your quality of life? Share your thoughts with us on social media  or in the comments section below.