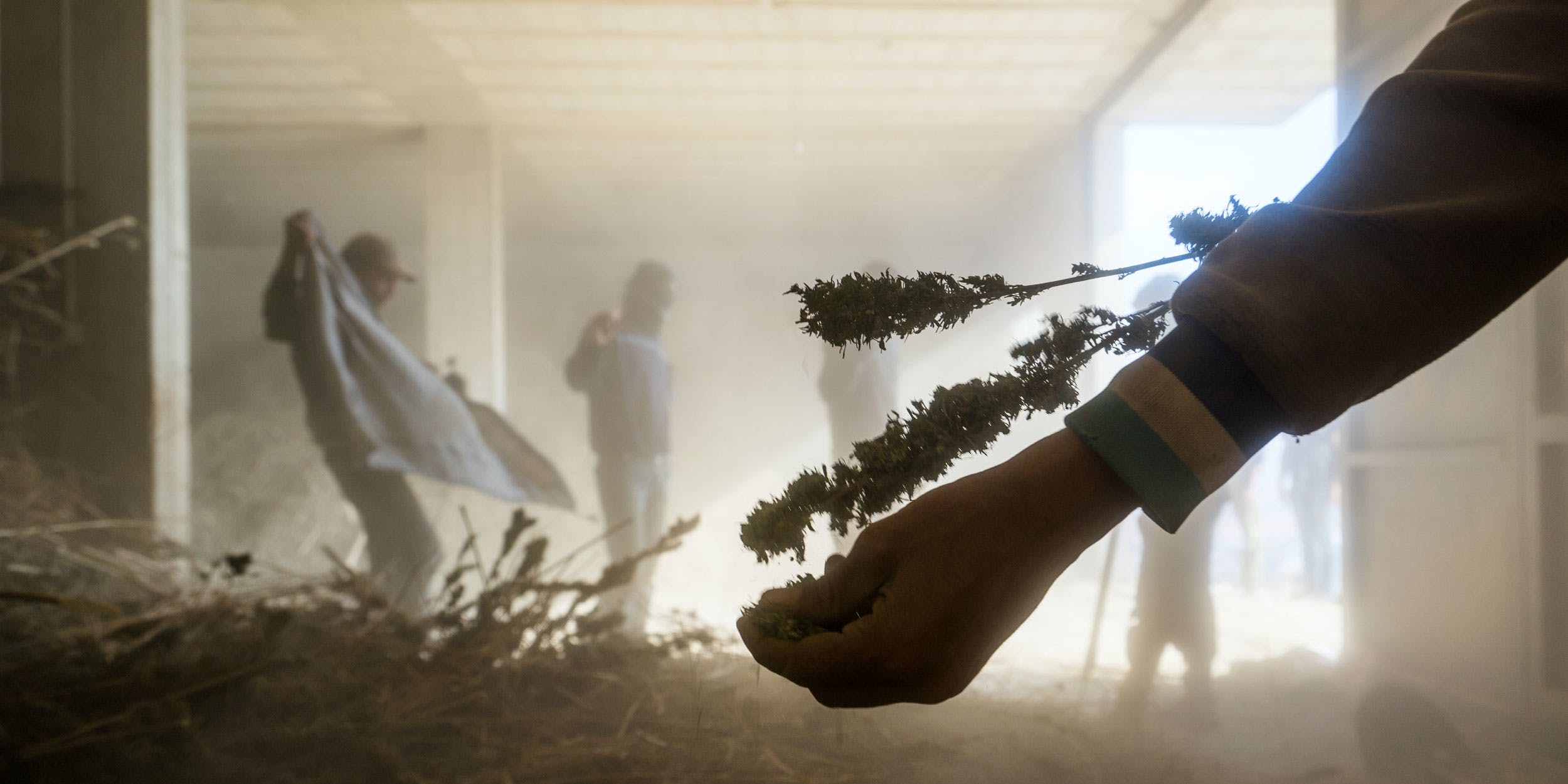 A marijuana processing warehouse in the Beqaa Valley in eastern Lebanon on November 1, 2015. Marijuana is grown openly in many areas of this 75 mile long valley and then processed into hashish in large warehouses during the cold winter months. The Syrian border runs the entire eastern length of the valley which over the the past two years has been a region of extreme tension and skirmishes as ISIS incursions increase into the small Lebanese border villages with most being protected by combined Hezbollah and Lebanese Army forces. Despite the massive military presence, the valley has always been one of the most fertile strips of land in the entire Middle East helped largely by the successful Litani hydroelectricity project that was completed in 1967 creating a web of canals that irrigate much of the valley. (Photo by Giles Clarke/Getty Images)

The country already has a booming black market.

A high-ranking member of the Lebanese government, Caretaker Economy and Trade Minister Raed Khoury, believes that cannabis can help ease his country’s financial woes, according to an interview with Bloomberg News. The minister, who is seeking new ways to revitalize Lebanon’s ailing economy, hypothesizes that legalizing cannabis could bring $1 billion in additional revenue to the country’s government, which is struggling to pay for public programs.

The idea to legalize comes from a report compiled by management consulting firm McKinsey & Co., which was hired by the government in January to come up with solutions to the economic crisis in Lebanon. Bloomberg obtained a tentative version of that report, which still has to be approved by the newly-elected Prime Minister’s government and suggests cannabis cultivation and export as a “quick win” solution, among other broader and more long-term reforms.

Though legalizing weed seems like a strange suggestion for a major consulting firm to make, this small Mediterranean nation is currently in crisis and is home to the perfect climate for cannabis cultivation. Lebanon is the third most indebted country in the world with its debt making up 150 percent of its economy’s output. Prior to 2017, the government had gone 12 years without even crafting a formal budget, a practice which is done annually under normal circumstances.

Lebanon is still reeling from a history of conflict, including a 15-year civil war in the 80s, a brief war with Israel in 2006 and spillover from the Syrian Civil War. But while those conflicts have wreaked havoc on Lebanon’s stability, they have been a boon for cannabis cultivators—ordinary farmers who have had trouble making a living any other way.

“The quality we have is one of the best in the world,” Khoury tells Reuters.

Cannabis has been cultivated in Lebanon since the days of the Roman Empire, and when the Ottoman Turks controlled the region they officially sanctioned its cultivation in the area now-famous for producing Lebanese Red hashish: the Bekaa Valley on the Syrian border.

This wouldn’t be the first time that politicians have called for Lebanon to legalize cannabis although it’s not a popular idea in the region at-large. In 2014, Walid Jumblatt, representing the Druze people who make up a large part of the valley’s population, publicly called for the crops to be turned into a legal industry. And while the idea didn’t gain much steam, it did garner some support from financial experts.

“There could be both work opportunities and a substantial increase in the national income if we legalize cannabis,” Economist Marwan Iskander told the BBC in 2016, noting that Lebanon could use the estimated $4 billion boost the industry could bring.

Though the post-Ottoman government frowned upon cannabis cultivation, when the country was plunged into a brutal civil war from 1975 to 1990, illegal cannabis cultivation in the valley boomed. At the time, Lebanon became the world’s fifth largest exporter of cannabis and the farmers who grew it thrived.

“The financial situation was very good. People could do everything, there were no economic restrictions,” the mayor of a local village told Reuters in 2007 after a resurgence of violence and a short-lived war with Israel opened the door to cultivation once again.

When the Civil War came to an end at the height of America’s international war on drugs, the US and the UN encouraged Lebanon to eradicate its cannabis crops. As a result, the government set up military-led eradication programs to burn and poison marijuana fields, a practice which has been drawn back as the army’s attention turns to containing the conflict in Syria.

Yet even before fighting began in 2011, Syrian migrant workers would come to the valley to harvest cannabis and send the money they made back to their relatives in Syria. Today, Reuters reports, refugees still come to Lebanon to harvest and support their families back in Raqqa, the city ISIS now claims as its capital.

But not everyone agrees that cannabis is good for Lebanon. Anthropologists like Geoffrey Clarfield and other experts point out that the region’s farmers are encouraged to grow and protected by Hezbollah, a militant political party the US government considers a terrorist organization.

When asked why they grow, the farmers of the region have told the BBC that it’s because the government doesn’t provide adequate support for farmers and growing wheat—or grapes for wine—just isn’t as profitable. Instead, the farmers are in the perfect spot, geographically, to throw down some seeds and spend the bare minimum on water and fertilizer to yield a high-paying crop.