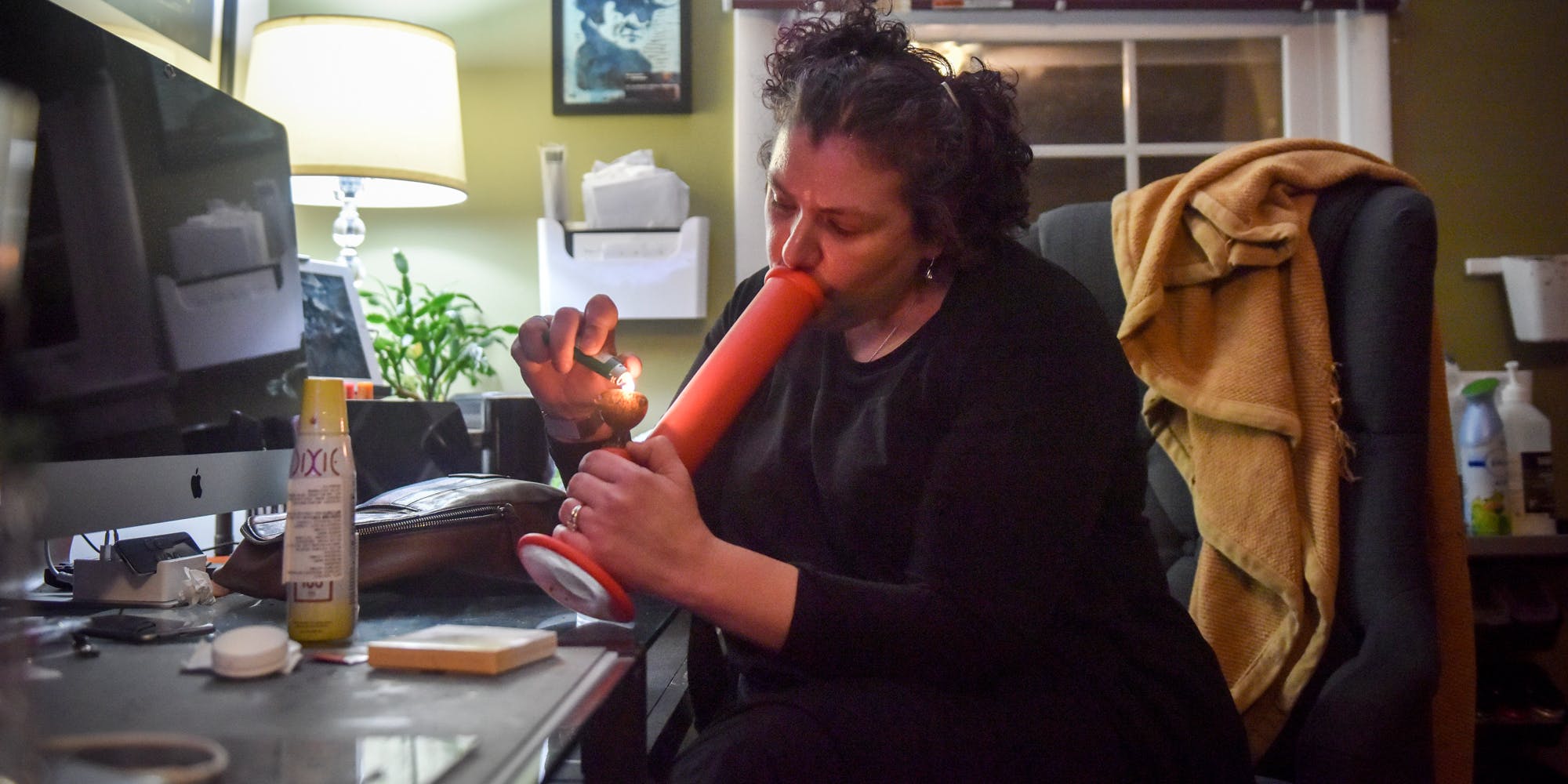 ROCKVILLE, MD – DECEMBER 1:
Peg Nottingham of Gaithersburg, MD, smokes a strain of medical marijuana called Northern Lights that she received today from Potomac Holistics on Friday, December 1, 2017 in Rockville, MD. Potomac Holistics is one of the first medical marijuana dispensaries in Maryland to open. Nottingham, who was diagnosed with ovarian cancer in January of 2016 and who went through chemotherapy over the summer of 2016, uses medical marijuana for nausea from inflammatory bowel disease and chemo-induced neuropathy. She said, “The great thing about marijuana is, it works for nausea almost immediately. As great as compazine and zofran are for nausea, they take time…Nausea is an everyday thing for me.”
(photo by Jahi Chikwendiu/The Washington Post via Getty Images)

“It’s amazing. It’s really the start of the culmination of a four-year journey for us,” said one Maryland dispensary owner.

Back in 2013, Martin O’Malley, then governor, signed a bill legalizing medicinal marijuana. But various political snafus prevented any dispensaries from actually selling the herbal medicine until Friday, December 1.

The effort to provide access was slowed down when no university-affiliated medical centers stepped forward to run the program. Meanwhile, several other states legalized weed outright.

“Maryland’s rollout of the medical program has been one of the slowest in the country, so we are very glad to see it finally getting off the ground,” said Kate Bell, legislative counsel for the Marijuana Policy Project (MPP).

Eventually, 102 dispensaries will be licensed throughout Maryland. Ten of them were authorized to do business as of Friday, according to the Maryland Medical Cannabis Commission. Seven of those 10 are in Montgomery, Frederick and Howard counties. There is, so far, one dispensary each in St. Mary’s County, Allegany County and on the Eastern Shore.

According to Maryland’s medical marijuana law, certified medical providers can authorize patients to use cannabis as long as they have a “bona fide” relationship with them (meaning they’re not just a phony doctor meeting with the person one time) and the herb can “reasonably be expected” to provide relief.

Dozens of patients cheered as they lined up outside Potomac Holistics, a licensed dispensary in Rockville, when sales began after receipt of the first shipment of weed on Friday afternoon, reports the Athens Banner Herald.

“You can tell there’s a buzz, and we’re excited for so many reasons,” said William Askinazi, one of the owners. “We’re giving care to people who need it. It’s amazing. It’s really the start of the culmination of a four-year journey for us.”

Denise Broyhill, among the first in the door to buy cannabis capsules, said she was upbeat and relieved after years of waiting. A resident of Annapolis, Broyhill said she was optimistic about treating her neurological condition with marijuana.

“I’m very excited to try it and relieved to get through the whole process after waiting so long,” Broyhill said. “It’s been a long time, but I’m looking to have some good pain management.”

Patrick Allison of Annapolis was also among the first in line. Allison suffers from ankylosing spondylitis, a disabling inflammatory disease. “It’s about time,” said Allison. “I live in chronic pain. You wouldn’t know it to look at me, but I’m about an eight right now on a scale of one to 10, head to toe. The only thing that works for me is marijuana.”

Medical cannabis is available in Maryland to anyone with a severe condition that has failed to be treated by other medicines and for which the symptoms are  “reasonably expected to be relieved” by marijuana.

Maryland doesn’t just allow physicians to certify patients as eligible to receive medicinal cannabis. Nurse practitioners, dentists, podiatrists and nurse midwives can also authorize patients. Medical professionals who can certify patients to use cannabis will also be able to do so for out-of-state patients who travel to Maryland.