Now Reading:legalization | The government holds a patent on medical marijuana, yet claims it has no medical value 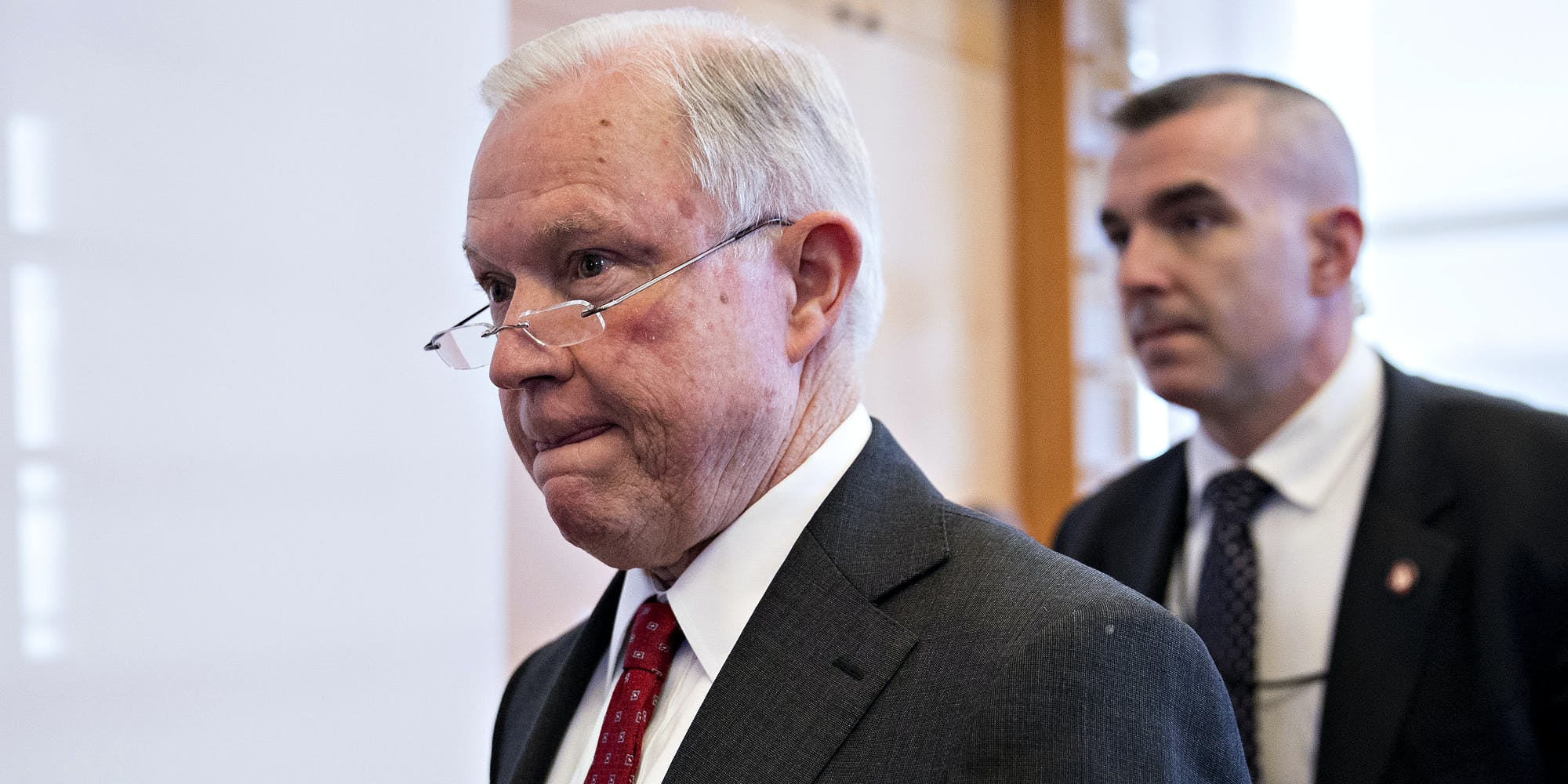 The government holds a patent on medical marijuana, yet claims it has no medical value

The Department of Justice has a long history of ignoring scientific and legal opinions. Patent 6630507 proves just that claims a case against Jeff Sessions.

If there was ever a time to consider the wisdom of a widely criticized law, it’s when the government has to be sued so that children can access their medicine. This is the case for both 7-year-old Jagger Cotte and 12-year-old Alexis Bortell. Their families are now challenging the Department of Justice and Attorney General Jeff Sessions for the right to use the only medicine that has offered relief for their life-threatening illnesses. (Jagger Cotte has a severe neurodegenerative disease and Alexis Bortell has epilepsy.)

For the Cotte and Bortell families, there’s no question that cannabis is medicine. Yet they now face years of court decisions and a labyrinth of restrictions reenforcing prohibition because, for the government, the results these families have seen firsthand are still up for debate.

So what sort of legal recourse do the children suing Jeff Sessions—along with the federal government, the DOJ, and the Drug Enforcement Agency—have? The families—joined by the Cannabis Cultural Association, veteran Jose Belen, and former NFL player Marvin Washington—are claiming that cannabis prohibition is unconstitutional because it violates the right to Due Process under the law. But also, among their claims, is that the law itself classifying cannabis alongside drugs like LSD and heroin is plainly irrational. All these drugs, classified as Schedule I under the Controlled Substances Act, are defined as having “no accepted medical use” and “a high potential for abuse.” The plaintiffs are arguing that there’s proof, in fact, that the federal government doesn’t even buy this.

Under the Fifth Amendment, no one may be “deprived of life, liberty or property” without “due process of law,” or fair treatment through the judicial system. In order for Due Process to exist, the law in question has to make sense. So the question is: can marijuana patients receive a fair trial under the law if the Controlled Substances Act (CSA) itself is irrational?

“Really the only reason marijuana is on Schedule I is that no one has yet demonstrated—satisfactorily—that it has medical benefits,” says Robert Mikos, a professor of law at Vanderbilt University.

This doesn’t mean that no evidence exists. There are studies which have demonstrated cannabis’ potential to treat a range of illnesses, but most are not considered rigorous or thorough enough to be conclusive. The main difficulty, however, is that the DOJ, which holds the power to determine how substances are scheduled, has a long history of ignoring scientific and even legal opinions which contradict its guidelines.

Not only are the scheduling guidelines incredibly strict, but the mechanism for rescheduling—or getting a drug into a different category that’s considered more lenient than flat-out prohibition—appears to be designed for self-sabotage. As the initial court filing points out, “The CSA requires testing and studies to reclassify Cannabis, but prevents such tests and studies from being conducted because Cannabis is supposedly so dangerous that it cannot be tested.”

In short, the Schedule I classification is a legal maze with no exit point. Research can legally be conducted on the safety and medical potential of cannabis, but it’s nearly impossible. For forty plus years, the government has only permitted researchers to conduct FDA-approved trials with marijuana from one farm at the University of Mississippi. This has significantly slowed down the progress needed to prove that cannabis should no longer be in Schedule I. In 2016, the DEA finally announced they would end this monopoly and start licensing other researchers to grow their cannabis, but, since then, more than 20 applications have just sat unaddressed by the agency.

What’s more, Attorney General Sessions’ case against the families of medical marijuana patients—like many of his personal opinions on marijuana—appears to be based on outdated information. In fact, according to court documents, the majority of the DOJ’s defense in this case hinges on precedent and research conducted over 20 years ago. According to court documents, the DOJ believes marijuana should remain illegal because it causes, “psychoactive effects that can lead to behavioral impairment,”—a definition which could easily be applied to something as innocuous as a sugar high.

Still, the most compelling case against the government is the one which sounds the least likely: that they don’t believe their own argument. Filed in 1999 by the Department of Health and Human Services (DHHS) and approved in 2003, the United States Government currently holds a patent with a revealing title: “Cannabinoids as Anti-Oxidants and Neuroprotectants.” In the application for Patent 6630507, the government clearly admits that it believes cannabis has curative properties:
The lawsuit Washington et al v. Sessions will argue that Patent 6630507 is a contradiction to the requirements of a Schedule 1 drug under the Controlled Substances Act that states that cannabis has no medicinal value.

The abstract of Patent 6630507 reads, “Cannabinoids have been found to have antioxidant properties, unrelated to NMDA receptor antagonism. This new found property makes cannabinoids useful in the treatment and prophylaxis of a wide variety of oxidation associated diseases, such as ischemic, age-related, inflammatory and autoimmune diseases. The cannabinoids are found to have particular application as neuroprotectants, for example, in limiting neurological damage following ischemic insults, such as stroke and trauma, or in the treatment of neurodegenerative diseases, such as Alzheimer’s Disease, Parkinson’s Disease, and HIV Dementia.”

The filing may explain why the National Institute on Drug Abuse (a branch of the Department of Health and Human Services) and the DEA’s website have completely different opinions on marijuana. According to court documents, that appears to be the federal government’s defense in the case: that because these are different branches of the government, it cannot be taken to mean that the whole government agrees. But if the government isn’t willing to take the opinion of its own health experts, then who could possibly make an argument to convince them that marijuana deserves to be rescheduled?

“The thing about a patent is you don’t get one if it doesn’t have any utility, so they certainly have the medical evidence to show that it works,” says Lauren Ruddick, an attorney for the Cotte and Bortell families. “When the government qualified for a patent it basically admitted that cannabis does not meet the requirements for Schedule I.”

Even within the DEA, officials have cast doubt on the Schedule I classification of cannabis. As far back as 1988, the DEA’s Chief Administrative Law Judge, Francis Young, recommended the rescheduling of cannabis saying, “Marijuana, in its natural form, is one of the safest therapeutically active substances known to man. By any measure of rational analysis, marijuana can be safely used within a supervised routine of medical care.”

Yet the powers delegated to the DEA allowed its chief administrator to completely ignore that opinion and several others over the years. That lack of rationality isn’t even limited to cannabis. If past behavior is anything to go by, actively ignoring scientific opinion appears to be a standard part of the scheduling process.

In 1985, the DEA commissioned its own study into MDMA in which experts like MAPS’ founder Rick Doblin offered no reason to file the substance under Schedule I. His opinion—which the DEA specifically requested—was ignored and Doblin has since dedicated more than 30 years to correcting that mistake.

Simply put, the law which makes marijuana illegal across the country is designed to keep it that way, and its administrators have repeatedly made decisions to enforce that rigid arrangement in spite of changing circumstances and a total transformation of the landscape. Against those odds, what other choice do marijuana patients have but to meet the government in court?