Michigan Governor Rick Snyder (R) aims to clarify and expand the ways in which medical cannabis is handled in the state going forward. 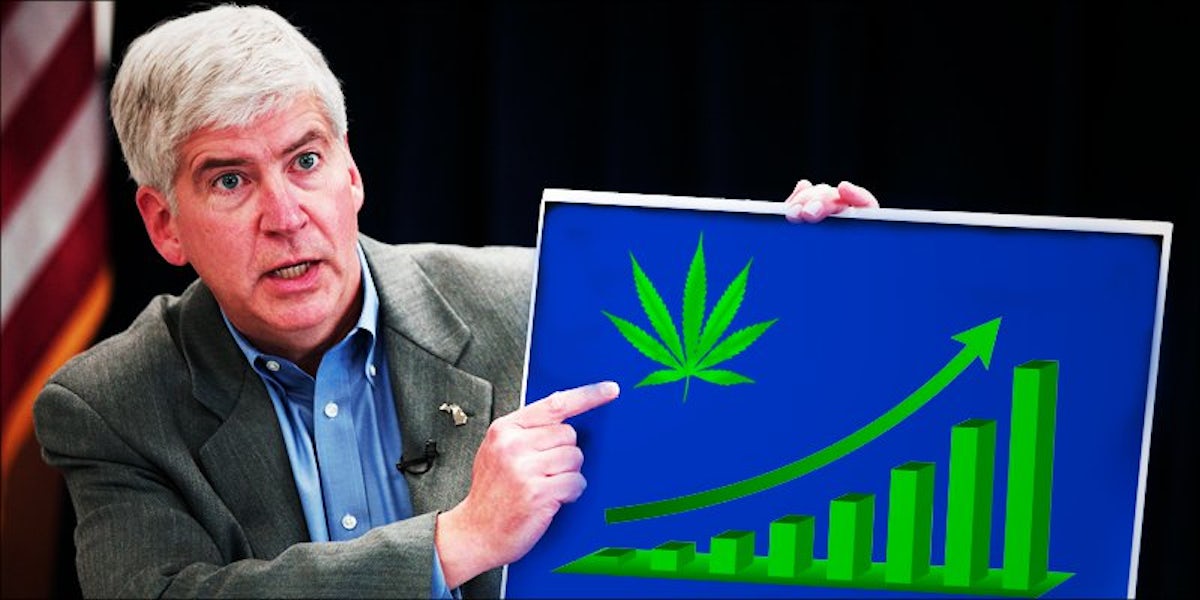 Michigan Governor Rick Snyder (R) has signed three bills dealing with the state’s medical cannabis program, all of which aim to clarify and expand the ways in which medical cannabis is handled in the state going forward.

Michigan first legalized the production and use of medical cannabis in November of 2008, via a ballot initiative. That, however, appeared to be the easy part.

Since its passage, the law has been met with countless problems, including a lack of clarity regarding many of its provisions. These have resulted in lawsuits over everything from cities banning the use of medical cannabis to the use of the substance in the workplace.

A court opinion authored by Michigan Court of Appeals Judge Peter J. O’Connell in the case of People v. Redden appears to perfectly encapsulate the law’s lack of clarity:

Reading this act is similar to participating in the Triwizard Tournament described in J.K. Rowling’s Harry Potter and the Goblet of Fire: the maze that is this statute is so complex that the final result will only be known once the Supreme Court has had an opportunity to review and remove the haze from this act.

What do the bills do?

The legislative package is comprised of three separate bills, all of which serve to solidify the state’s medical cannabis regime.

The first bill, House Bill 4209, also known as the Medical Marihuana Facilities Licensing Act, establishes a licensing and regulation regime surrounding medical cannabis. In other words, it provides greater power to local governments in regulating certain aspects, such as the location or total number, of cannabis provisioning facilities.

That bill also provides a licensing and regulation framework for people who work in the medical cannabis industry, such as growers, processors, transporters, and others

The second bill, House Bill 4827, establishes a “seed-to-sale” tracking system that monitors and tracks, according to the bill, how marijuana in the state is “grown, processed, transferred, stored, or disposed of under the Medical Marihuana Facilities Licensing Act.”

Finally, the third bill, House Bill 4210, explicitly allows for the manufacture, use, and sale of cannabis edibles to patients who qualify to receive them.

Gov. Snyder released a statement in concert with assigning his signature to the package, saying that implementation of the new measures would benefit innumerable numbers of medical patients across the state.

This new law will help Michiganders of all ages and with varying medical conditions access safe products to relieve their suffering… We can finally implement a solid framework that gives patients a safe source from which to purchase and utilize medical marijuana.

Snyder was not the only official to express confidence in the measures. Several state legislators, including the package’s legislative sponsors, state Reps. Michael Callton, Klint Kesto, and Lisa Postumus Lyons, worked to assure their passage.

The measures also garnered support from interest groups from around the state and the country. Among the more prominent package’s backers were the National Patient’s Rights Association, Michigan Parents for Compassion, and the Michigan Epilepsy Foundation.

Do you think that Michigan’s governor should have signed the bills? Tell us why on Facebook, Twitter, or in the comments below.

Enjoy the latest and greatest from Herb, enter your email below to get exciting cannabis updates delivered to your inbox.
September 25, 2016 — Last Updated December 12, 2019
Written by Stephen Calabria