Synthetic cannabinoids can lead to seizures, psychosis, and even death. 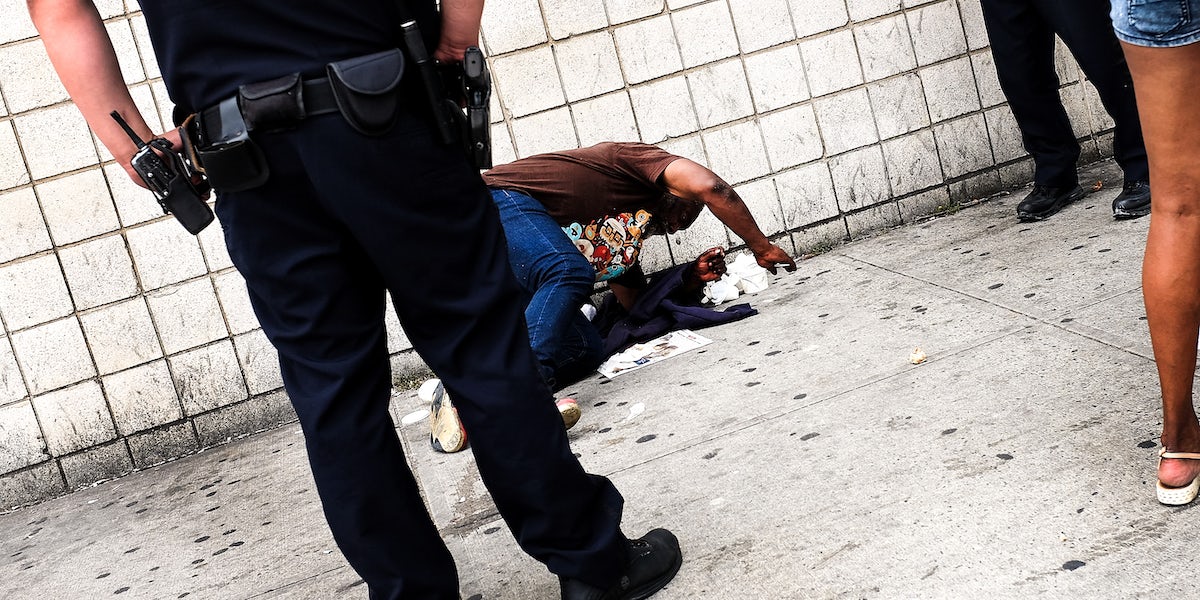 NEW YORK, NY – SEPTEMBER 02: Police stand over a man passed out due to the drug K2 in an area which has witnessed an explosion in the use of K2 or ‘Spice’, a synthetic marijuana drug, in East Harlem on September 02, 2015 in New York City. New York, along with other cities, is experiencing a deadly epidemic of synthetic marijuana usage including varieties known as K2 or ‘Spice’ which can cause extreme reactions in some users. According to New York’s health department, more than 120 people visited an emergency room in the city in just one week in April. While the state banned the ingredients used to make K2 in 2012, distributors have switched to other ingredients and names in an attempt to circumvent the law. (Photo by Spencer Platt/Getty Images)

In March, the federal body which provides sentencing guidelines to judges indicated that it would like to increase mandatory minimum prison sentences for those dealing fentanyl and synthetic cannabis.

The announcement by the Sentencing Commission is a response to the rise in opioid-related deaths, which claimed the lives of more than 60,000 Americans in 2016. Specifically, the new guidelines address the rise in fentanyl use, which was responsible for a third of overdoses in 2016. Fentanyl is often cited as being ten times more powerful than heroin and its use has risen along with the overprescription of opioids by physicians.

“A growing number of synthetic drugs are being developed and trafficked on the illicit drug market,” said the chair of the commission, Judge William H. Pryor, Jr. “It is important that the sentencing guidelines account for our most current understanding of the chemical structure, potency and effect, trafficking trends, and community impact of these drugs.”

Another substance on the radar of the sentencing officials is synthetic cannabis. In a public hearing before the commission, Keith M. Graves from the National Narcotics Officers Association said that law enforcement is having to adapt not just as a result of opioids, but as a result of bath salts and synthetic cannabinoids, the most common of which is k2 or spice, which can lead to seizures, psychosis, and even death.

Critics have noted that higher prison sentences may not be the answer to the opioid crisis as they have been shown to have very little effect on overall rates of use, according to a new study from PEW Research. They predict that higher sentences based on the weight of the substance will only result in dealers selling purer forms of the substance in order to fall within the range limit of the lowest sentence.

“Fentanyl is safer the more diluted it becomes, which happens lower on the distribution chain,” Paul Hofer of Johns Hopkins University told BuzzFeed News. “The incentives [of higher sentences for lower amounts] are to keep it in its purest form, to keep it as potent as possible, so they get a sentencing benefit.”

According to the Drug Enforcement Administration, even at its lowest levels, pure fentanyl can be lethal and only requires 2 milligrams to cause an overdose.

The Commission’s new guidelines are tentative and open to a public comment period that runs until March 28th. The final guidelines are expected to be voted on by May 1, 2018.

Since 2016, 25 states have enacted higher sentences for synthetic opioids, with some states like Kentucky putting in place zero tolerance policies, making trafficking in any amount of fentanyl punishable by up to 10 years.

Attorney General Jeff Sessions has also indicated his support for increased penalties, having announced measures to expedite prosecutions of opioid-related crimes in November and indicating that he believes the prison population should increase earlier this month.