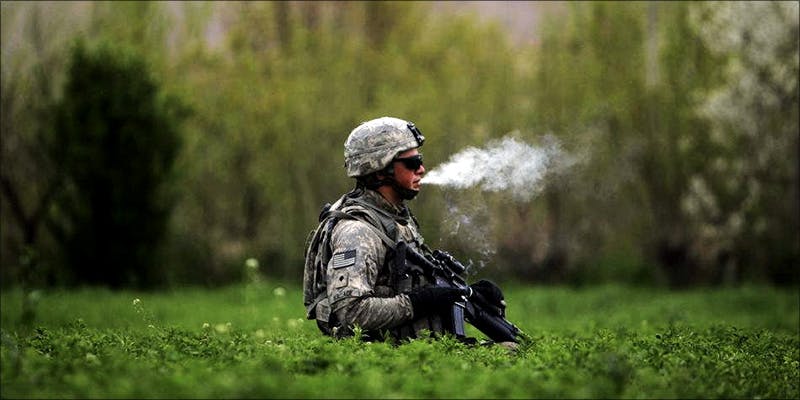 Texan Veterans Up In Arms Over Medical Cannabis Restrictions

Texas is one of 22 states in the US that still denies patients access to medical cannabis. For patients in the state trying to avoid the deadly and addictive opioids being forced on them by Big Pharma, it is a battle they may finally have a chance of winning. For Texan veterans, the battle is one of life or death.

Military-minded men and women have an affinity for Texas, as many come from or retire to the scenic southern state. When they come home, they bring the baggage of battle: wounds both outside and in. One of those veterans is retired Army Maj. David Bass.

David shared with the press his journey from battle to battle, and his choice to illegally heal with cannabis.

Diagnosed with PTSD and chronic pain after serving in Bagdad, David received a list of opioid prescriptions from Veteran Affairs that slowly tore down his life. David told the Daily Reckoning,

I felt like a zombie. I had flat emotions, experienced suicidal ideation… got addicted to hydrocodone. It got to where I couldn’t do without taking it every day.

[My doctors] told me that I needed to take these drugs for at least two more years before we even talked about not using them anymore. I became very discouraged. One day, I was so discouraged that I flushed the drugs down the toilet.

I researched medical cannabis and discovered that thousands of veterans testify that cannabis is effective for chronic pain and PTSD.Cannabis wasn’t a gateway drug for me. It was an exit drug.

David now acts as Director of Veteran Outreach for Texas NORML. Through Operation Trapped, he has helped bring awareness to the plight of veterans.

Among the worst states for cannabis users, Texas ranks near the top. Every year, 60,000 to 70,000 Texans are arrested for simple cannabis possession. Racial disparity is also rampant as although minorities use cannabis at a lesser rate than Caucasians, the arrest rate is 2-4 times as high as for whites.

As the largest bordering state to Mexico, and a sordid past with the nation, Texas has long used cannabis prohibition to curb the large Mexican community, and labeled any mind-altering agent other than alcohol or religion anathema.

The large budgets provided by Border Patrol and DEA funding also have the gun-loving State well armed and reluctant to change.

But as steady pressure has been mounted by members of activist groups, business lobbyists, and the tipping point of over half the nation last fall, the Lone Star State looks to be pulling its head out of the sand.

Now, a number of measures have been once again put before the State Legislature relating to cannabis. Among them, Senate Bill 269 shows promising support.

SB269 includes protections for patients and caregivers including:

SB269 stands as one of the better legalization measures passed around the nation in the past decade. It prevents cities or counties from instituting dry counties, protects against job loss for qualified users, and most importantly, prevents people from going to jail for their medicine.

Another measure is making its way through Texas House committee, HB81. That bill would decriminalize possession of less than 1 ounce to a $250 fine, rather than the 180-day jail sentence and $2,000 fine currently in place. That bill has already passed out of committee with a successful 4-2 vote.

If both were to pass, possession under an ounce in the state would be possible for both medical and recreational users, though non-medical use would still risk a small fine and confiscation.

The state of affairs

Texas lawmakers infuriated the public in their previous attempts to assuage medical patients. In 2015, the low-THC (0.3%) cannabis oil law restricted access to intractable epilepsy only.

Worse, it required doctors to “prescribe” cannabis, a Federally illegal act, rather than “recommend” cannabis, as others states allow. They then limited the number of licenses and tried to raise fees to exorbitant levels.

Along with a number of other measures put to the Texas House and Senate this session, the momentum of the nation may help pull a victory out of this ten-gallon hat.