According to a recent report, 345,000 patients are being denied access to life-saving treatment under Texas’s restrictive medical marijuana laws. 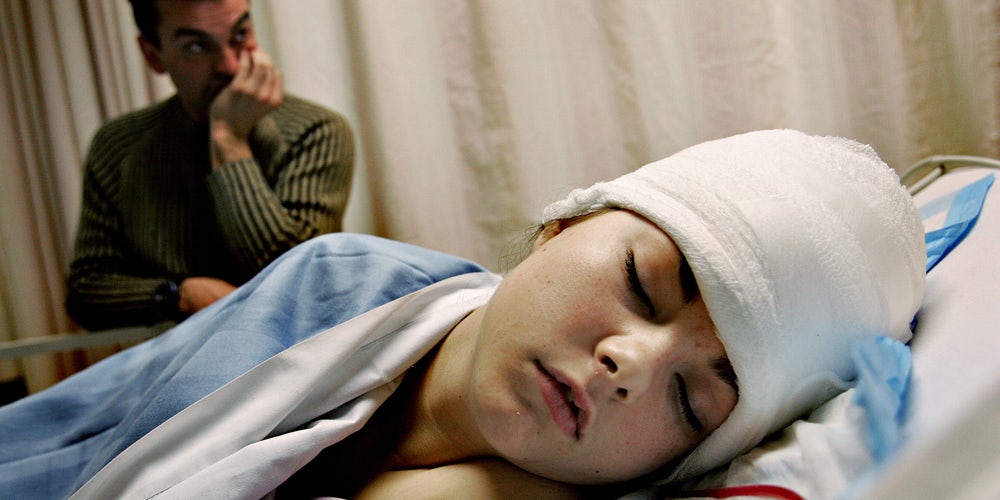 CARISSA WANNAMAKER–02/19/07–Ritchie Wanamaker father of Epileptic 13 year old Carissa Wannamaker visit his daughter in the recovery ward just hours after she underwent neurosurgery to remove a portion of the left side of her brain which doctors have pin-pointed to contain the activity controlling her seizures. This is the second surgery performed on Carissa at Toronto’s Sick Kids hospital in effort to stop Carissa’s seizure episodes. February 19, 2007. (Tara Walton/Toronto Star) (Photo by Tara Walton/Toronto Star via Getty Images)

In Texas, over 300,000 epilepsy patients have been excluded from safe access to a potentially life-saving medicine. While the new treatment is still considered experimental, the medicine was approved for limited use in Texas back in 2015.

The problem? Only a select number of epilepsy patients have access to the innovative treatment. The remaining 345,000 patients with epilepsy don’t make the cut.

Over two years ago, Texan voters passed the Compassionate Use Act. The bill allowed for the creation of a limited medical cannabis program, allowing those with treatment-resistant intractable epilepsy to access low-THC cannabis products.

In 2018, the three medical cannabis centers approved in the Lone Star State are expected to open their doors. This enables patients fortunate enough to qualify for the program to travel to one of these three locations to obtain their medicine.

The creation of a medical cannabis program, albeit a limited one, in Texas was a major victory for patients and medical professionals alike. Yet, months before the first dispensaries are supposed to open their doors, the Compassionate Use Act is receiving some major, heart-wrenching criticism.

While the Compassionate Use Act is helpful for some patients, it leaves thousands of patients left in the dust, including 12-year-old Micah Jensen.
Micah was diagnosed with autism and temporal lobe epilepsy early in his life. Due to his condition, Micah routinely experiences unprovoked seizures which are partially controlled by conventional anticonvulsant medications. Yet, despite taking high doses of the anticonvulsant Lamaticil, Micah has developed a new symptom: a recurrent migraine.

First published by The Observer, Micah’s mother, Bonnie Jensen, recalls the horror of being awoken by her son’s screams in the middle of the night. She rushed Micah to the emergency room in an effort to relieve his incomprehensible pain. For immediate relief, Micah was given an antidepressant medication.

“He was on the antidepressant for nine days,” tells Jensen. “He was so spaced out, like a zombie. When I tried to call his name, he wouldn’t even look at me.”

After the first severe migraine incident, the potential cause of Micah’s pain was revealed by a neurologist. The verdict? Micah’s anticonvulsant medication had stopped working and his frequent seizures were causing excessive inflammation in the brain. The child needed increased doses of Lamictal.

To Bonnie, this is disappointing news. Lamictal is far from a benign medication. Lethal in high doses and featuring severe side effects, this traditional anticonvulsant medication worsens symptoms of Micah’s autism and increases his self-injurious behavior.

Perhaps even more devastating, patients like Micah do not qualify for medical cannabis in Texas. While non-psychoactive cannabis is available to epilepsy patients in over 28 states and Washington DC, the Texan Compassionate Use Act is among the most limiting.

Phase 2 and Phase 3 clinical trials of cannabis compounds have found that phytochemicals in the herb successfully treat some forms of intractable epilepsy with a high margin of safety.

Yet, legislators in the State of Texas, as well as the U.S. Federal Congress, have yet to make cannabis compounds safely available to the thousands of patients that may benefit from this type of treatment.

“[Cannabis] is something that should at least be an option for a doctor to recommend,” Jensen tells The Observer. “It cannot hurt. If he overdoses on his seizure medications, it can be lethal. But if he overdoses on cannabis, it’s not.”

Earlier this year, The Observer reports, at least half of the Texas house agreed to support a broad-reaching medical cannabis program that would allow patients like Micah access to safe medicine. Yet, the new bill was never considered by the full house.

Unfortunately for Micah and many others like him, his intractable epilepsy “just isn’t bad enough” to qualify for cannabis treatment in Texas.

Get 20% off premium weed and discover the latest products, news, and deals in cannabis.
December 29, 2017 — Last Updated January 08, 2020
Written by Anna Wilcox