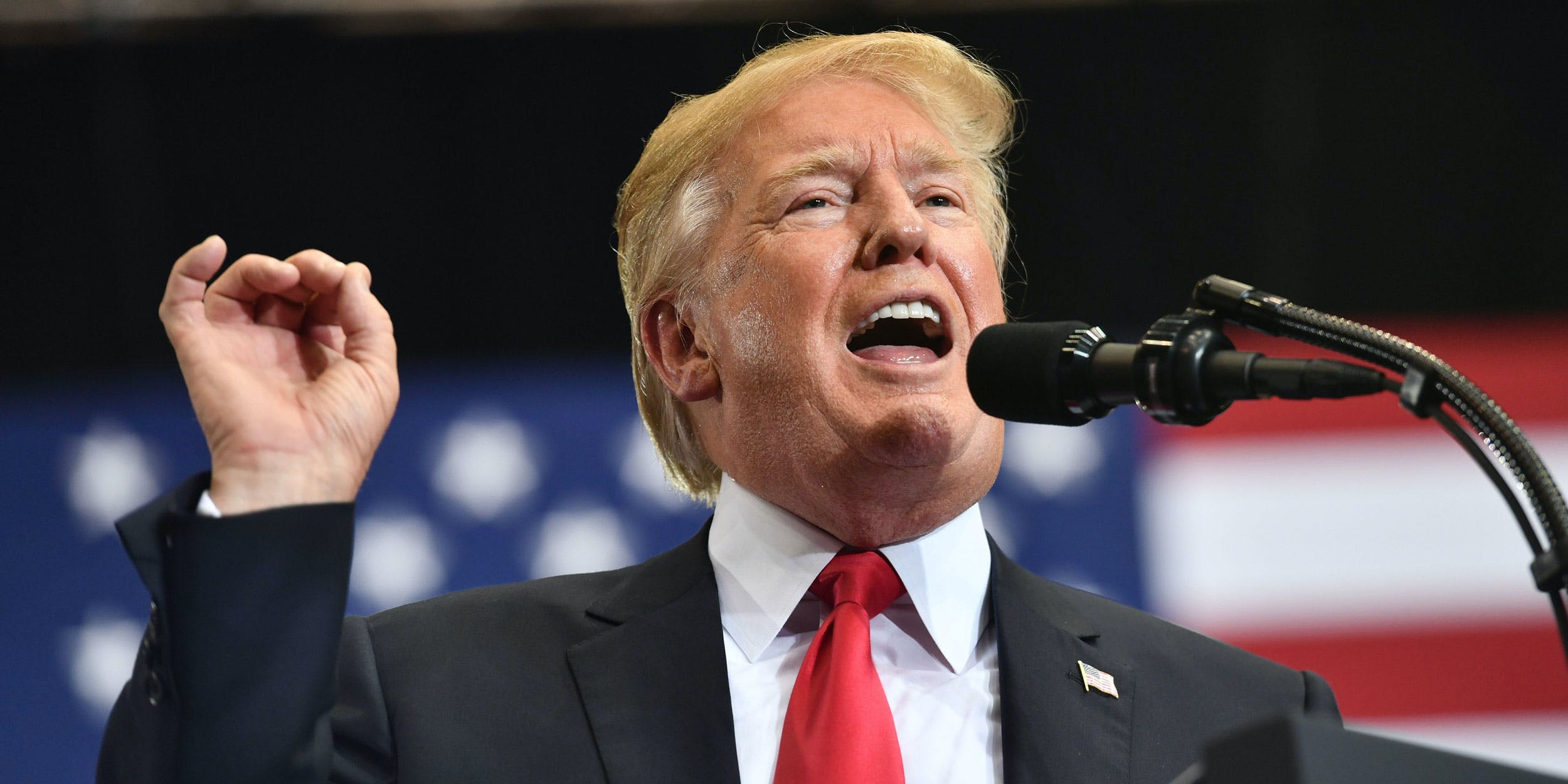 US President Donald Trump addresses a rally at the Nashville Municipal Auditorium in Nashville, Tennessee, May 29, 2018 (Photo by Nicholas Kamm/ AFPGetty Images)

The STATES Act would give states the right to self-determine cannabis laws without the looming threat of federal interference.

While preparing to board Marine One on Friday, President Trump briefly expressed his support for the recently introduced STATES Act, which would allow states to choose whether or not to legalize marijuana.

The bi-partisan bill introduced yesterday (June 7) by Sens. Cory Gardner (R-CO) and Elizabeth Warren (D-MA) would amend the federal ban on cannabis under the Controlled Substances Act to allow states to legalize within their borders without federal interference.

When asked by reporters if he supports the STATES Act, Trump said, “I really do, I support Senator Gardner, I know exactly what he’s doing. We’re looking at it, but I probably will end up supporting that, yes.”

Trump’s support of the bill was expected since it is seen as the result of an agreement reached by the president and Gardner in April. After Attorney General Jeff Sessions rescinded the Cole memo protections for legal states in January, Gardner held up votes on all remaining Justice Department nominations until Trump promised to support states’ right to legalize marijuana.

Some doubt was cast over Trump’s support of the measure on Thursday when the Washington Post reported that the president had sent a letter supporting Sessions recession of the Cole memo to Kevin Sabet, the president of the anti-legalization group Smart Approaches to Marijuana.

The letter, signed by Trump, read “this decision is a return of discretion to federal prosecutors, who know where and how to deploy their resources most effectively to reduce violent crime, stem the tide of the drug crisis, and dismantle criminal gangs.”

But the president’s comments on Friday appeared to dispel the doubt around his support for the bill which would still keep the federal ban in place.

The STATES Act’s provisions which are focused on legalization within states include:

“President Trump made a commitment to Senator Gardner that he would support a federalist approach to state marijuana laws. Now Congress must do its part and swiftly move forward on this bipartisan legislation that explicitly provides states with the authority and autonomy to set their own marijuana policies absent the fear of federal incursion from a Justice Department led by militant cannabis prohibitionist Attorney General Jeff Sessions.”

In addition to it’s introduction to the Senate, the bill is sponsored by Reps. Jared Polis (D-CO), David Joyce (R-OH) and Earl Blumenauer (D-OR) in the House – an important step as the bill must pass both houses of Congress in order to make it to Trump’s desk.

“We should trust the people of the states, like Ohio, who have voted to implement responsible common-sense regulations and requirements for the use, production, and sale of cannabis,” said Representative Joyce said in a statement.

The bill has gained the support of advocates and industry reps alike, possibly making it the most likely of several legalization measures to become law.

On Thursday, the legalization advocacy group NORML, which helped to craft the bill with Warren and Gardner, released a letter detailing 55 advocacy organizations which have expressed their support for its passage.

Once signed, the STATES Act would finally free cannabis companies to operate as normal businesses.